Comments (0)
Add to wishlistDelete from wishlist
Cite this document
Summary
In the paper “Breathing and Respiration” the author analyzes the process used by organisms in exchanging gases with the environment, and it entails the use of oxygen and elimination of carbon dioxide. Oxygen and carbon dioxide are the two gases that are most in both ventilation and respiration…
Download full paperFile format: .doc, available for editing
HIDE THIS PAPERGRAB THE BEST PAPER94.9% of users find it useful 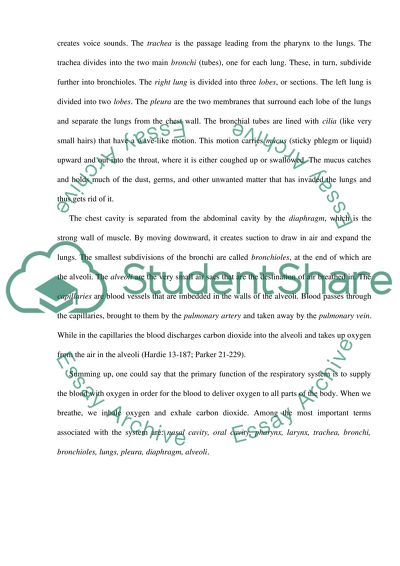 Extract of sample "Breathing and Respiration"

﻿Breathing and Respiration
The respiratory system is an organ system which is used for breathing. Scientifically formulated, breathing is the process by which oxygen in the air is brought into the lungs and into close contact with the blood, which absorbs it and carries it to all parts of the body. At the same time the blood gives up waste matter (carbon dioxide), which is carried out of the lungs with the air breathed out.
The respiratory system starts with the sinuses, which are hollow spaces in the bones of the head. Small openings connect them to the nasal cavity. The functions they serve are not clearly understood, but include helping to regulate the temperature and humidity of air breathed in, as well as to lighten the bone structure of the head and to give resonance to the voice. The nasal cavity (nose) is the preferred entrance for outside air into the respiratory system. The hairs that line the inside wall are part of the air-cleansing system. Air also enters through the oral cavity (mouth), especially in people who have a mouth-breathing habit or whose nasal passages may be temporarily obstructed, as by a cold.
The adenoids are overgrown lymph tissue at the top of the throat. When they interfere with breathing, they are generally removed. The lymph system, consisting of nodes (knots of cells) and connecting vessels, carries fluid throughout the body. This system helps resist body infection by filtering out foreign matter, including germs, and producing cells (lymphocytes) to fight them. The tonsils are lymph nodes in the wall of the pharynx that often become infected. They are an unimportant part of the germ-fighting system of the body. When infected, they are generally removed.
The pharynx (throat) collects incoming air from the nose and passes it downward to the trachea (windpipe). The epiglottis is a flap of tissue that guards the entrance to the trachea, closing when anything is swallowed that should go into the esophagus and stomach. The larynx (voice box) contains the vocal cords. It is the place where moving air being breathed in and out creates voice sounds. The trachea is the passage leading from the pharynx to the lungs. The trachea divides into the two main bronchi (tubes), one for each lung. These, in turn, subdivide further into bronchioles. The right lung is divided into three lobes, or sections. The left lung is divided into two lobes. The pleura are the two membranes that surround each lobe of the lungs and separate the lungs from the chest wall. The bronchial tubes are lined with cilia (like very small hairs) that have a wave-like motion. This motion carries mucus (sticky phlegm or liquid) upward and out into the throat, where it is either coughed up or swallowed. The mucus catches and holds much of the dust, germs, and other unwanted matter that has invaded the lungs and thus gets rid of it.
The chest cavity is separated from the abdominal cavity by the diaphragm, which is the strong wall of muscle. By moving downward, it creates suction to draw in air and expand the lungs. The smallest subdivisions of the bronchi are called bronchioles, at the end of which are the alveoli. The alveoli are the very small air sacs that are the destination of air breathed in. The capillaries are blood vessels that are imbedded in the walls of the alveoli. Blood passes through the capillaries, brought to them by the pulmonary artery and taken away by the pulmonary vein. While in the capillaries the blood discharges carbon dioxide into the alveoli and takes up oxygen from the air in the alveoli (Hardie 13-187; Parker 21-229).
Summing up, one could say that the primary function of the respiratory system is to supply the blood with oxygen in order for the blood to deliver oxygen to all parts of the body. When we breathe, we inhale oxygen and exhale carbon dioxide. Among the most important terms associated with the system are: nasal cavity, oral cavity, pharynx, larynx, trachea, bronchi, bronchioles, lungs, pleura, diaphragm, alveoli.
Works Cited
1. Hardie, Jackie. Breathing and Respiration. Des Plaines, Illinois: Rigby Interactive Library, 1997.
2. Parker, Steve. The Lungs and Respiratory System. Austin, Texas: Raintree Steck-Vaughn, 1997. Read More
Share:
Tags
Cite this document
(“Breathing and Respiration Essay Example | Topics and Well Written Essays - 500 words”, n.d.)
Retrieved from https://studentshare.org/health-sciences-medicine/1508914-breathing-and-respiration

CHECK THESE SAMPLES OF Breathing and Respiration

...Cellular respiration After three steps during respiration, a molecule of glucose and 6 molecules of oxygen are converted to 6 molecules of carbon dioxide, water and energy (Rich, PR, 2003) as shown below. C6H12O6 + 6O2 ----- 6CO2 + 6H2O + 36 ATP However, the process of generating energy during cellular respiration is not as simple as the equation looks. Cellular respiration can be defined as a process of oxidizing fuel molecules such as glucose to carbon dioxide and water. The energy released during this process is held in the ATP molecules for all the energy consuming activities of the cell. The fuel molecules used by the cells include glucose, amino acids and fatty acids and the common electron acceptor or the oxidizing agent... is the...
9 Pages(2250 words)Essay

...Human Respiration NORMAL BREATHING A fully annotated trace demonstrating a normal breathing pattern is shown in the diagram labelled Normal Breathing. Tidal Volume The Tidal Volume (TV) is the quantity of air that a person is breathing in and out under a normal resting respiratory cycle. The trace for normal breathing shows a reading varying between 3000cc of air and 4000cc. This shows a value for TV of 1000cc. Normal values for TV are 500cc. Frequency of Breathing The Frequency of Breathing is the number of breathing cycles per minute. One breathing cycle is an...
4 Pages(1000 words)Lab Report

...of the human respiratory system. www.health.uab.edu/default.aspx?pid=65823 Each of the above labelled parts performs an important task specific to only that organ during the process of respiration. The following are the various components of the Respiratory Tract: Parts of the Respiratory System Primary Parts: Air is breathed in through the nostrils where it encounters the Nose Hairs, located at the entrance of the nose which filter out large dust and other unwanted foreign particles from it. The air then passes onto the interior of the nose called the Nasal Cavity/ Passage. It is lined with a sticky mucous membrane and contains tiny, surface hairs called cilia. The mucus and cilia collect dust,...
6 Pages(1500 words)Essay

...Breathing Underwater Order No. 343892 No. of pages: 4 6530 Introduction ‘Breathing Underwater’ is a gripping story of a young sixteen year old youth named Nick Andreas, who looked charming and handsome to the world around him – his friends, family and even to his girlfriend Caitlin Alyssa McCourt, but had quite a different personality on the inside and who knew the reality better, than Nick himself. Things seemed normal and perfect from the outside but the only person that knew otherwise was Nick, who tried his best to fool everyone around with his calm demeanor. Life for Nick in the affluent area of South Florida was a dream. He had it all – a rich family, plenty of money, a good school and classmates...
4 Pages(1000 words)Essay

Benefits of breathing in Pilates

...June 21, Pilates is a system of movements and exercises that focus on developing muscle strength to optimum and increasing flexibility. The exercises lengthen, strengthen and realign the body in a quest to improve endurance, control and power (Mama’s Health, Para. 1). It is composed of six original principles aimed at establishing and improving the quality of one’s work out; and includes alignment, breath, concentration, control, flow and stabilization. This paper will focus on the details involved in the breath principle of Pilates. It will also pay attention to the benefits of practicing Pilates. Breathing In Pilates exercises, breathing was conducted according to...
2 Pages(500 words)Term Paper

..., blood vessels, capillaries, blood, spleen, trachea, lungs, and pericardium (Starr and McMillan 2013). Structure of the Respiratory System Respiration involves inhalation and exhalation of air. The respiratory system is a structure that enables human beings to breath. As stated earlier, respiration involves absorption of oxygen from the atmosphere and elimination of Carbon dioxide. The respiratory system is identified by different structures from the nose to the chest. Some of the structures are the nose, throat, larynx, trachea, primary bronchi, and alveolar duct. The structures of respiration are categorised into lower and the upper respiratory tract. The nose, mouth...
5 Pages(1250 words)Lab Report

...is directed to maintain breathing by the medulla4. A part of the brain called the pons, located near the medulla, is key in smoothening the breathing and respiration pattern. Synchronization occurs between the involved neural centers and the muscle movement in order to ensure smooth breathing. The control occurs automatically and continuously. One does not have to think about it for it to take place. The frequency as well as the depth of breathing is very important aspects since they help in maintaining levels of oxygen, Carbon Dioxide and Hydrogen in blood. There are a number of receptors which perceive changes in the lung volume and concentration of...
2 Pages(500 words)Essay

2 Pages(500 words)Assignment
sponsored ads
Save Your Time for More Important Things
Let us write or edit the essay on your topic "Breathing and Respiration" with a personal 20% discount.
GRAB THE BEST PAPER

Let us find you another Essay on topic Breathing and Respiration for FREE!