Comments (1)
Add to wishlist Delete from wishlist
Cite this document
Summary
The paper "How Lifestyle Affects Personal Health" highlights that personal health is of utmost importance and it is the responsibility of every individual as well as the society to ensure that they only engage in activities that promote proper personal health…
Download full paper File format: .doc, available for editing
HIDE THIS PAPERGRAB THE BEST PAPER92.6% of users find it useful 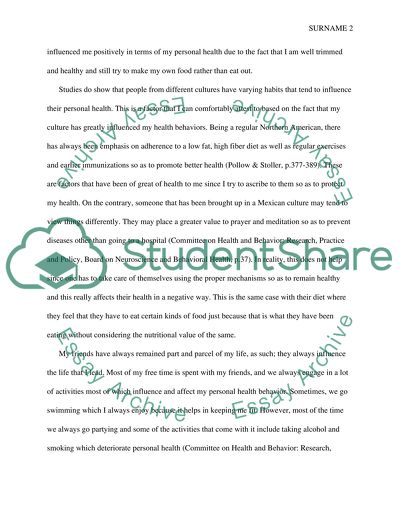 Our health is greatly affected by the lifestyle that we choose. As such, many people have been interested in predicting and understanding the factors that affect health behavior. Proper health is an important factor in society and many public health professionals have tried to reduce the negative factors and promote the positive ones with respect to health behavior. Many people have put the focus on developing strategies that channel their attitude towards health promotion. Despite this fact, most people’s health behavior is influenced by factors such as culture, environment, and generally how they were raised and this will be the basis of discussion in this paper.
Personally, one of the greatest things that affect my personal health behavior is my family that is the parental advice that I got regarding what is right and what is not. Since time immemorial, parents have been known to have a great influence on who their children become and this has been the case with me. My dietary choice is greatly influenced by what I used to have when I was a small kid still under my parent's care. Eating out in fast food restaurants was a luxury that us kids in the family only admired from afar. My parents believed in preparing our meals at home and always defended this by saying that then we could monitor what we ate and only get the best in terms of the nutrients and way of preparation, for instance, it is only in our house where sausages could be shallow fried as opposed to deep-fried with my mum saying that it reduced the fat that we consumed which was not proper for our health. I could say that this has influenced me positively in terms of my personal health due to the fact that I am well-trimmed and healthy and still try to make my own food rather than eat out.
Studies do show that people from different cultures have varying habits that tend to influence their personal health. This is a factor that I can comfortably attest to based on the fact that my culture has greatly influenced my health behaviors. Being a regular Northern American, there has always been an emphasis on adherence to low fat, high fiber diet as well as regular exercises and earlier immunizations so as to promote better health (Pollow & Stoller, p.377-389). These are factors that have been of great health to me since I try to ascribe to them so as to protect my health. On the contrary, someone that has been brought up in a Mexican culture may tend to view things differently. They may place greater value to prayer and meditation so as to prevent diseases other than going to a hospital (Committee on Health and Behavior: Research, Practice and Policy, Board on Neuroscience and Behavioral Health, p.37). In reality, this does not help since one has to take care of themselves using the proper mechanisms so as to remain healthy and this really affects their health in a negative way. This is the same case with their diet where they feel that they have to eat certain kinds of food just because that is what they have been eating without considering the nutritional value of the same.
My friends have always remained part and parcel of my life, as such; they always influence the life that I lead. Most of my free time is spent with my friends, and we always engage in a lot of activities most of which influence and affect my personal health behavior. Read More
Share:
Tags
Cite this document
(“Personal Health Essay Example | Topics and Well Written Essays - 750 words”, n.d.)
Retrieved from https://studentshare.org/health-sciences-medicine/1477052-2-part-paper-part-1-is-about-evaluating-personal-health-behaviors-and-identifying-factors-that-affect-your-health-behaviors-pa

ak
akuhic added comment 1 year ago
Student rated this paper as
At first, I thought 3 of pages is too much for such a topic. But now I see it could not be done better. As the author starts you see the complexity of the subject. I’ve read all at once. Great essay

CHECK THESE SAMPLES OF How Lifestyle Affects Personal Health

8 Pages (2000 words) Assignment
sponsored ads
Save Your Time for More Important Things
Let us write or edit the essay on your topic "How Lifestyle Affects Personal Health" with a personal 20% discount.
GRAB THE BEST PAPER

Let us find you another Essay on topic How Lifestyle Affects Personal Health for FREE!