Comments (0)
Add to wishlistDelete from wishlist
Cite this document
Summary
Obesity in social class Name: Institutional Affiliation: Health Inequalities and Social Class Social class has been associated with health inequalities for a long time. This has been depicted in the mortality rate where the average age of death among the rich is high compared to the poor…
Download full paperFile format: .doc, available for editing
HIDE THIS PAPERGRAB THE BEST PAPER98.2% of users find it useful 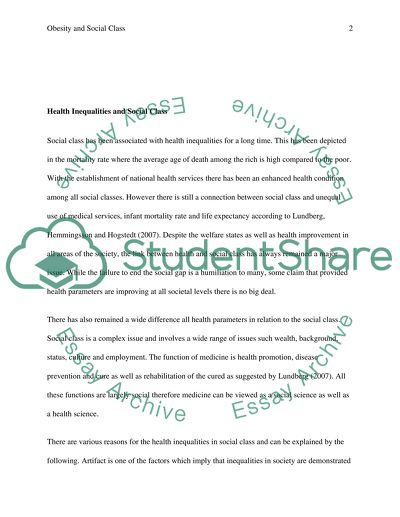 Download file to see previous pages Despite the welfare states as well as health improvement in all areas of the society, the link between health and social class has always remained a major issue. While the failure to end the social gap is a humiliation to many, some claim that provided health parameters are improving at all societal levels there is no big deal. There has also remained a wide difference all health parameters in relation to the social class. Social class is a complex issue and involves a wide range of issues such wealth, background, status, culture and employment. The function of medicine is health promotion, disease prevention and cure as well as rehabilitation of the cured as suggested by Lundberg (2007). All these functions are largely social therefore medicine can be viewed as a social science as well as a health science. There are various reasons for the health inequalities in social class and can be explained by the following. Artifact is one of the factors which imply that inequalities in society are demonstrated in different ways of measuring social class. The pitch of class differences in as far as health is regarded in society depends to some extend on measurement of health and class in that society. Natural and social selection is another factor for the inequality and explains that unhealthy remain behind the social scale as the healthy have the high chance of social development. Hence people with poor health experience a turn down in socio-economic situations while the healthy ones rise. Culture provides another explanation for health inequality and social class. It explains that those in lower social class favor less healthy styles such as consuming more fatty foods, a lot of smoking and less exercise as opposed to the higher social class people. Thus the different choices between the different social classes create their health inequalities according to Bartley (2004). The material explanation for this inequality suggests that poverty, poor provision of health and educational resources, poor housing and highly risky occupations characterizing the life of the life of the lower social class determines their poor health. However some diseases such as obesity are more prevalence within the rich families. Social capital is also another factor and it argues that how people engage in community through work, club membership, social organizations, family and other social groups has an effect to their health. This explains the idea that social isolation is dangerous to ones health where the unemployed and retired respond poorly to health as opposed to the employed. How Obesity is Linked with Social Class and Factors Which Influence the Health Status of Individuals and Groups The effect of social class on obesity is very substantial. As a result the issue of obesity is becoming an epidemic of its own kind as it is increasingly rising. Thus the media has doubled its coverage of issues related to obesity. It has established that lowers income earning families and those in the lowers social class are more prone to becoming obese as opposed to middle class and upper class. Thus there is no doubt to argue that obesity related to social class as suggested by Chambers and Wakley (2002). For one it is being common to those in the regular and semi-regular employment than the professional employment. The link between the two is more evident among women of the two different classes. Social origins of various social classes are also ...Download file to see next pagesRead More
Share:
Tags
Cite this document
(“Obesity in social class Essay Example | Topics and Well Written Essays - 1500 words”, n.d.)
Obesity in social class Essay Example | Topics and Well Written Essays - 1500 words. Retrieved from https://studentshare.org/health-sciences-medicine/1437135-obesity-in-social-class
(Obesity in Social Class Essay Example | Topics and Well Written Essays - 1500 Words)
Obesity in Social Class Essay Example | Topics and Well Written Essays - 1500 Words. https://studentshare.org/health-sciences-medicine/1437135-obesity-in-social-class.
“Obesity in Social Class Essay Example | Topics and Well Written Essays - 1500 Words”, n.d. https://studentshare.org/health-sciences-medicine/1437135-obesity-in-social-class.
Comments (0)
Click to create a comment or rate a document

CHECK THESE SAMPLES OF Obesity in social class

Erving Goffman was an astute observer of society, who immersed himself in the social environment which he was studying. He carefully observed and recorded the ways in which people’s behavior and interpersonal interactions are carried out in everyday life. He notes that “people perform their social roles and, as they do so, they produce social order through their actions and the regu...
6 Pages(1500 words)Article
sponsored ads
Save Your Time for More Important Things
Let us write or edit the essay on your topic "Obesity in social class" with a personal 20% discount.
GRAB THE BEST PAPER

Let us find you another Essay on topic Obesity in social class for FREE!