Comments (0)
Add to wishlist Delete from wishlist
Cite this document
Summary
Understanding of both the sedimentary and environmental responses in the coastal areas to the changes in climate and sea levels is very fundamental for proper management of the coastal areas and land use. Late glacial Holocene back barriers that were formed under the dominant…
Download full paper File format: .doc, available for editing
HIDE THIS PAPERGRAB THE BEST PAPER96.1% of users find it useful 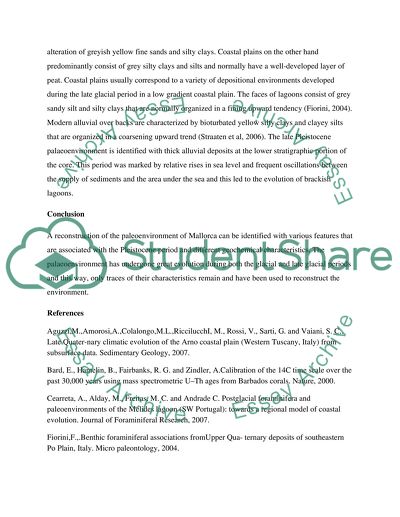 Palaeoenvironment: Quaternary materials and succession related to climate and sea level change Introduction Understanding of both the sedimentary and environmental responses in the coastal areas to the changes in climate and sea levels is very fundamental for proper management of the coastal areas and land use. Late glacial Holocene back barriers that were formed under the dominant effect of global forcing factors can be a great source of information on the response pattern of the coastal areas to deposition and changes in sea level (Aguzzi et al, 2007). The geochemistry of the wetlands is also very useful in tracing both the palaeoenvironmental changes and impacts of human activities on the changing faces of coastal areas. Normally, a reconstruction of the palaeoenvironment indicates that these areas are characterized by coastal plains, lagoons and alluvial plains (Bard et al, 2000). In this research, a multidisciplinary approach that combines sedimentological and microplaentological analyses will be used to reconstruct the palaeoenvironmental variations.
Equipment
The following equipment was used to gather various data to be used in the research: 5m tape, GPS, compass clino and GS chart.
Discussion
The data that was collected about the core should be analyzed as part of the geological mapping project at a scale of about 1:50,000. A sedimentological report of the core including soil elements such as the mean grain size, structure of the sediments, color, organic matter and peat horizons were included in the geological map (Cearreta et al, 2007). From the sedimentological report, the lowest and uppermost points of the sea level could be established. For further geochemical analysis, evenly distributed samples of sediments were collected at different locations and used for chemical analysis. Determination of the chemical compositions of the sediments can be done using x-ray fluorescence spectrometry.
From the sedimentological report of core analysis, stratigraphic intervals existing in the geology of the coastal areas were identified. The late Pleistocene alluvial faces were identified with an alteration of greyish yellow fine sands and silty clays. Coastal plains on the other hand predominantly consist of grey silty clays and silts and normally have a well-developed layer of peat. Coastal plains usually correspond to a variety of depositional environments developed during the late glacial period in a low gradient coastal plain. The faces of lagoons consist of grey sandy silt and silty clays that are normally organized in a fining upward tendency (Fiorini, 2004). Modern alluvial over backs are characterized by bioturbated yellow silty clays and clayey silts that are organized in a coarsening upward trend (Straaten et al, 2006). The late Pleistocene palaeoenvironment is identified with thick alluvial deposits at the lower stratigraphic portion of the core. This period was marked by relative rises in sea level and frequent oscillations between the supply of sediments and the area under the sea and this led to the evolution of brackish lagoons.
Conclusion
A reconstruction of the paleoenvironment of Mallorca can be identified with various features that are associated with the Pleistocene period and different geochemical characteristics. The palaeoenvironment has undergone great evolution during both the glacial and late glacial periods and this way, only traces of their characteristics remain and have been used to reconstruct the environment.
References
Aguzzi,M.,Amorosi,A.,Colalongo,M.L.,RiccilucchI, M., Rossi, V., Sarti, G. and Vaiani, S. C.. Late Quater-nary climatic evolution of the Arno coastal plain (Western Tuscany, Italy) from subsurface data. Sedimentary Geology, 2007.
Bard, E., Hamelin, B., Fairbanks, R. G. and Zindler, A.Calibration of the 14C time scale over the past 30,000 years using mass spectrometric U–Th ages from Barbados corals. Nature, 2000.
Cearreta, A., Alday, M., Freitas, M. C. and Andrade C. Postglacial foraminifera and paleoenvironments of the Melides lagoon (SW Portugal): towards a regional model of coastal evolution. Journal of Foraminiferal Research, 2007.
Fiorini,F.,.Benthic foraminiferal associations fromUpper Qua- ternary deposits of southeastern Po Plain, Italy. Micro paleontology, 2004.
Straaten,L.M.J.U.Van,Holocene and Late Pleistocene sedimentation in the Adriatic Sea. Geologische Rundschau, 2006. Read More
Share:
Tags
Cite this document
(“Palaeoenvironment:Quaternary materials and succession related to Essay”, n.d.)
Palaeoenvironment:Quaternary materials and succession related to Essay. Retrieved from https://studentshare.org/geography/1681235-palaeoenvironmentquaternary-materials-and-succession-related-to-climate-and-sea-level-change

“Palaeoenvironment:Quaternary Materials and Succession Related to Essay”, n.d. https://studentshare.org/geography/1681235-palaeoenvironmentquaternary-materials-and-succession-related-to-climate-and-sea-level-change.
Comments (0)
Click to create a comment or rate a document

CHECK THESE SAMPLES OF Palaeoenvironment:Quaternary materials and succession related to climate and sea level change

Climate Change Introduction Climate change continues to be a problem not only by several individuals or nations, but rather it is a dilemma for the entire globe. As global warming speeds up, climate change also picks up its pace, a threat from nature to mankind which would yield undesirable effects. Although it is a devastating dilemma, we are not left hopeless. Climate change urges rapid modifications on how we run our systems by altering our individual lifestyles, establishing legislation as the nation’s aid, and participation of other countries in this endeavor. Individuals Human activities are frequently blamed as root causes of climate change. Similarly, human beings can clean up this mess through little ways. When we are awa...
2 Pages (500 words) Essay

... Geography Climate Change Introduction Climate change is anticipated to affect the developing countries, whereby the high temperatures, changes associated with precipitation patterns, rising sea levels and frequent disasters related to weather. In fact, the changes in climate are posing a significant risk on the agriculture, food and water suppliers while the effort of alleviating poverty, diseases and food insecurity are put on stake, while lives of many citizens in under developed countries are being affected. Nevertheless, the changes in the climatic conditions have affected the scientific curiosity, whereby they are no longer considered an environmental and regulatory concern. Therefore, climate change is considered an overriding...
4 Pages (1000 words) Research Paper

The UNIPCC described the earth’s warming as “unequivocal” and reported that this is “evident” in the “widespread melting of snow and ice and rising global average sea level” (30). Global average sea level has been rising from 2.4 to 3.8 millimeters per year or at an average of 1.8 millimeters per year from 1993 to 2003 (UNIPCC 30). Arctic sea ice extent has been decreasing from 2.1 to 3.3% per decade or at an average of 2.7% per decade (UNIPCC 30).

In the ongoing global warming, although the ocean is taking up 80% of the additional heat, the land regions have warmed faster than the oceans (UNIPCC 30). The warming is definitely affecting the fishes and the living organisms of th...

The Impact of Sea Level Rise Due to Climate Change

...The Impact of Sea Level Rise Due to Climate Change The Impact of Sea Level Rise Due to Climate Change Introduction Many scientists have been interested in discovering how climate change relates to sea level. It has been established that climate change is responsible for the increase in sea volume. Basically, there are two ways in which climate change triggers an increase in sea volume. These include expansion of seawater as temperatures increase and melting of ice on land, which finally drains into sea causing a surge in sea volume. Scientists have forecasted that the rise in sea level is likely to be higher following steady increase in the last centuries. With recent increase in incidents of coastal community flooding, the impact...
5 Pages (1250 words) Research Paper

... Global warming Climate change is the effect brought about by the production and emission of greenhouse gases such as carbon dioxide, methane, and nitrous oxide, into the atmosphere, which causes entrapment of heat, which is fleeing the earth, thus causing overall rise in regular temperatures of the earth (Seymour 15). It is one of the most pressing issues in today’s world as it affects the natural settings and balance of the earth’s ecosystem, which is consequently, affects human beings (Houghton 44). They are various causes of this global warming, natural and man-made with the latter being highly blamed, but how do human actions impact global warming? The human factor is highly credible in causing this climate change. One of the human...
4 Pages (1000 words) Essay

... Adaptation Response Climate change is a threatening aspect all across the globe. It will continue to change in the coming centuries at unprecedented rates in the recent human history. Therefore, adaptation to climate change is an emerging subject in the modern world (Lo 2012). Adaptation simply refers to the steps put in place to reduce vulnerability and building resilience. This implies that adaptation is the management of the risks posed by climate change with respect to the mitigation decisions revolving around the environment, economy and the future generations (IPCC 2014). This is because vulnerability results from loss of resilience in a system, but resilience is about the level of capability of the people which is limited...
2 Pages (500 words) Admission/Application Essay

... Problems Related to Climate Change. For several years now, many global issues that have been coming up are climate-related including environmental, social, political, and economic issues. Adverse changes in climatic conditions are threatening human needs due to high temperatures, rise in sea level, and more frequent or tense extreme events. These climatic changes are affecting living organisms, as well as various essential resources in the environment such as water and food. As a result, the problem of climatic change arises in different versions as named above, political, economic, social, and environmental. Although this problem is a global issue, the impacts vary across the globe since some areas experience more adverse effects than...
4 Pages (1000 words) Essay
sponsored ads
Save Your Time for More Important Things
Let us write or edit the essay on your topic "Palaeoenvironment:Quaternary materials and succession related to climate and sea level change" with a personal 20% discount.
GRAB THE BEST PAPER

Let us find you another Essay on topic Palaeoenvironment:Quaternary materials and succession related to climate and sea level change for FREE!