Comments (0)
Add to wishlistDelete from wishlist
Cite this document
Summary
This term paper " Water Use in Castle Rock, Colorado" examines the measures that are taken to conserve the water, particularly in summer months in Castle Rock. Water use in Castle Rock, Colorado needs special attention because it lies in a semi-arid region…
Download full paperFile format: .doc, available for editing
HIDE THIS PAPERGRAB THE BEST PAPER98.3% of users find it useful 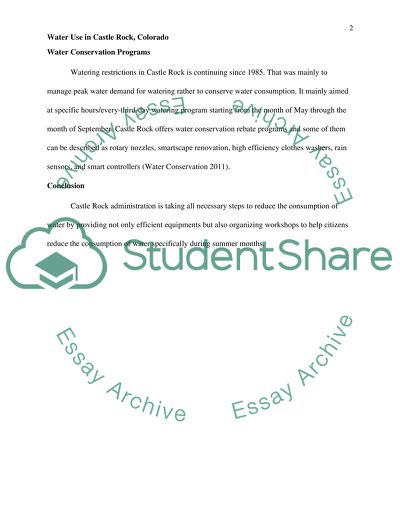 Extract of sample "Water Use in Castle Rock, Colorado"

The total rainfall in Castle Rock is estimated between 8-15 inches in a year; that is why every drop is precious wherever it is used. The water consumption in Castle Rock varies by time of year. It increases by 400 percent in summer months in comparison to the winter season as people use a huge amount in watering their lawns. There are 50 wells in Castle Rock having the depth of more than 2000 feet. These wells are capable of producing 18.5 million gallons of water per day. The raw water is filtered and disinfected with chlorine to get rid of bacteria in the water. Castle Rock has 15 tanks spread throughout the town to store 36 million gallons of water (Water Conservation 2011).

Water Conservation Programs
Watering restrictions in Castle Rock is continuing since 1985. That was mainly to manage peak water demand for watering rather conserve water consumption. It mainly aimed at specific hours/every-third-day watering program starting from the month of May through the month of September. Castle Rock offers water conservation rebate programs and some of them can be described as rotary nozzles, smart scope renovation, high-efficiency clothes washers, rain sensors, and smart controllers (Water Conservation 2011).

CHECK THESE SAMPLES OF Water Use in Castle Rock, Colorado

This water is around 95 million acre feet and while most of it is absorbed by the forests and rangelands, some 16 MAF goes into rivers and creeks from where it is supplied to 4.6 million people in Colorado alone.
Colorado has a legal obligation to serve other states and thus 8.8 MAF of water goes to south western states including Utah, Nevada, California, New Mexico, Arizona, and Mexico. Even though California is dependent on Colorado for water supply, it needs to understand that water resources of the state are limited and droughts are common in Colorado causing even faster absorption of water.
Colorado finds it increasing hard to serve a state as big as California and there are concerns about possible water shortage. Ca...
4 Pages(1000 words)Essay

If we analyzed the Fig. 1 then we come to know that it is a block drawing of circuitry in a typical Li-ion battery set. It demonstrates an instance of a security protection circuit for the Li-ion cells and a gas...

The first way in which gender identity and sexuality became a represented aspect in popular culture was through specific songs and lyrics that represented gender. Male and female bands created a sense of marginalization between the two sexes, specifically by creating songs that we're able to represent a specific type of identity. The construction in which the songs were created in was focused specifically on patriarchal concepts, where women were identified as sexual objects and men were able to pursue the women. The lyrics by women took this same attitude in which there was a desire to have a construct that was attractive to men. This began in the 1960s with songs such as Itsy Bitsy Teeny Weeny Yellow Polka Dot Bikini, which show...
7 Pages(1750 words)Article

Technology...
10 Pages(2500 words)Essay
sponsored ads
Save Your Time for More Important Things
Let us write or edit the term paper on your topic "Water Use in Castle Rock, Colorado" with a personal 20% discount.
GRAB THE BEST PAPER

Let us find you another Term Paper on topic Water Use in Castle Rock, Colorado for FREE!