Comments (0)
Add to wishlist Delete from wishlist
Cite this document
Summary
In the paper “Australia’s Immigration Policies” the author concerns about Australia as a “nation of immigrants”. It also carries several worries for the government that policy measures have to be implemented that run counter to international treaties. …
Download full paper File format: .doc, available for editing
HIDE THIS PAPERGRAB THE BEST PAPER91.4% of users find it useful 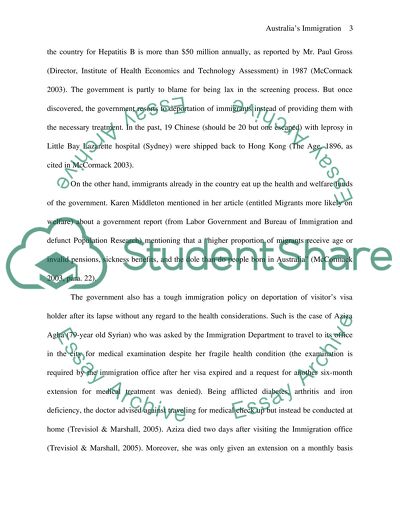 Download file to see previous pages Ten percent or 4,000 of the annual migrants to Australia are carriers of hepatitis B virus, said Professor Boughton in 1988 (hepatitis vaccine researcher) (Daily Telegraph 1988, as cited in McCormack 2003). Syphilis has drastically increased due to migration since the 1960s (McCormack 2003). Leprosy- and tuberculosis-afflicted migrants also passed undetected during screening according to the Australian Health and Medical Research Council in 1987 (McCormack 2003). These cases of infectious disease carrying migrants and refugees alarm the government as mentioned in the Medical Journal of Australia (McCormack 2003). Dr. Rouch (Victoria Chief Health Officer) reported that 10 African migrants in Victoria were later discovered to have AIDS in 1989 (McCormack 2003).
Cases of migrants bringing in diseases with them pose a grave concern for the government. Diagnosis, treatment and indirect cost (e.g. lost productivity, premature death) of the country for Hepatitis B is more than $50 million annually, as reported by Mr. Paul Gross (Director, Institute of Health Economics and Technology Assessment) in 1987 (McCormack 2003). The government is partly to blame for being lax in the screening process. But once discovered, the government resorts to deportation of immigrants instead of providing them with the necessary treatment. In the past, 19 Chinese (should be 20 but one escaped) with leprosy in Little Bay Lazarette hospital (Sydney) were shipped back to Hong Kong (The Age, 1896, as cited in McCormack 2003).
...Download file to see next pages Read More
Share:
Tags
Cite this document
(“Australia's immigration policies Essay Example | Topics and Well Written Essays - 2000 words”, n.d.)
Australia's immigration policies Essay Example | Topics and Well Written Essays - 2000 words. Retrieved from https://studentshare.org/geography/1564423-australias-immigration-policies

Situated in Port Douglas, North Queensland; the Black Brawns Aquaculture project mainly concentrates on the production of prawns. Prawns are mostly produced in large-scale ponds. The process of this production runs 24 hours a day throughout the year. It is a four-stage process that involves hatching, growing, harvesting and processing of the prawns. Given that the prawns feed at night, most of the activities of feeding run between 11 pm to dawn (Anderson Et al, 2006 p 4).
Prawn farming in Australia is a thriving industry that employs 2,800 people directly and indirectly. It produces 3,500 metric tons of prawns annually in farms covering 900 hectares. It raises a total revenue of US$ 47 million (FAO, 2009). Apart from Port Dou...
9 Pages (2250 words) Coursework

Marsupial species including diprotodons and a giant reptile, the Megalania, a goanna species measuring up to 7 meters in length, disappeared within a relatively short time. Australia suffered greater extinction rates than other continents with an estimate of over 85% of all vertebrates over a bodyweight of 40 kilograms becoming extinct (Roberts et al, 2001).
Australian megafauna during the Pleistocene included marsupial mammals, birds, and reptiles, with marsupial herbivores weighing up to 1,500 kilograms. Kangaroo species reached weights of up to 1,000 kilograms and the largest bird, Geyornis newton, weighed an estimated 100 kg (Hiscock, 2008).
The tendency to evolve into larger species (gigantism) is a product of natur...
6 Pages (1500 words) Assignment

The first culture clash between the Aboriginals and the Europeans was over clothing4. The Europeans were used to covering themselves up completely5. As a result, the Europeans were shocked to see naked Aboriginals roaming around freely6. The Abori...
6 Pages (1500 words) Article
sponsored ads
Save Your Time for More Important Things
Let us write or edit the essay on your topic "Australia's immigration policies" with a personal 20% discount.
GRAB THE BEST PAPER

Let us find you another Essay on topic Australia's immigration policies for FREE!