Comments (0)
Add to wishlistDelete from wishlist
Cite this document
Summary
This paper aims to analyze the population details of a chosen country in detail. It will also discuss what factors are responsible for this change and what measures the government of that country is taking in order to control the population. I have chosen Germany as the country I will be studying…
Download full paperFile format: .doc, available for editing
HIDE THIS PAPERGRAB THE BEST PAPER93.8% of users find it useful 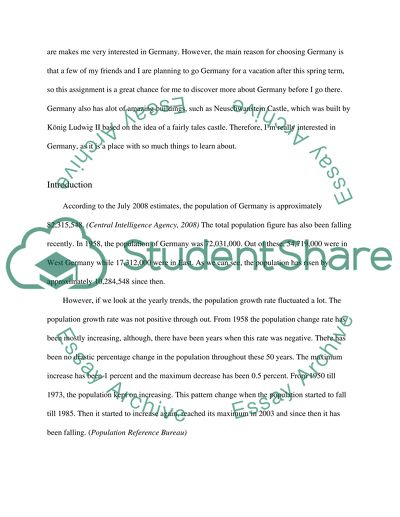 Download file to see previous pages By studying the population change over the last 50 years, we will be able to find out how this separation affected the population distribution. Another factor which makes Germany stand out and ideal for this case study is the fact that Germany is listed as the host of the third-highest percentage of international migrants worldwide. (United Nations Population Fund, 2006) Besides this, Germany’s population is changing in a way where the birthrates are much lower than the death rates which is causing the population to age. Therefore, studying this will help us learn a lot about one of the most pressing problems for countries all over the world.
These were all the facts that made Germany ideal for a population change case study. I also have a few personal reasons for why I have selected Germany as my country under study. Firstly, every year I hear about Berlinale, F1 race, Internationales Beethovenfest, and Oktoberfest, which are makes me very interested in Germany. However, the main reason for choosing Germany is that a few of my friends and I are planning to go Germany for a vacation after this spring term, so this assignment is a great chance for me to discover more about Germany before I go there. Germany also has a lot of amazing buildings, such as Neuschwanstein Castle, which was built by König Ludwig II based on the idea of a fairy tales castle. Therefore, I’m really interested in Germany, as it is a place with so many things to learn about.
Introduction. According to the July 2008 estimates, the population of Germany is approximately 82,315,548. (Central Intelligence Agency, 2008) The total population figure has also been falling recently. In 1958, the population of Germany was 72,031,000. Out of these, 54,719,000 were in West Germany while 17,312,000 were in the East. As we can see, the population has risen by approximately 10,284,548 since then. '
However, if we look at the yearly trends, the population growth rate fluctuated a lot. The population growth rate was not positive throughout. From 1958 the population change rate has been mostly increasing, although, there have been years when this rate was negative. There has been no drastic percentage change in the population throughout these 50 years. The maximum increase has been 1 percent and the maximum decrease has been 0.5 percent. From 1950 till 1973, the population kept on increasing. This pattern change when the population started to fall until 1985. Then it started to increase again, reached its maximum in 2003 and since then it has been falling. (Population Reference Bureau)
Also, another change can be seen in the distribution of the population within East and West Germany. In 2006, the population in West Germany was 65,667,000 and the population of East Germany was 16,648,000. As we compare this with 1958’s data, we notice that the population in West Germany has increased while the population in East Germany has decreased. (Federal Statistical Office, 2007)
Factors Affecting Population and Change. The projection of population carried out by the Federal Statistical Office shows that the population will keep on falling in future and by 2050, the lower limit of the expected population will approximately be what it was in 1950. According to the Population Reference Bureau, the population will fall by 13 percent by 2050. (Population Reference Bureau)
The government is worried because this fall in population is largely the result in a fall in the birth rate. According to the Population Reference Bureau, in 2008, the percentage change because of Births and Deaths in population was -0.2 percent. ...Download file to see next pagesRead More
Share:
Tags
Cite this document
(German Population Research Paper Example | Topics and Well Written Essays - 1988 words, n.d.)
German Population Research Paper Example | Topics and Well Written Essays - 1988 words. Retrieved from https://studentshare.org/geography/1513659-german-population

CHECK THESE SAMPLES OF German Population

Water and Energy Versus The Ideal US Population

... of many species. Land is constantly being converted from its natural state into farms, cattle grazing areas, mines, housing developments, golf courses, office buildings, shopping malls, and other urban and suburban areas. For all species, smaller habitats mean fewer food and shelter resources. Scientists have discovered that decreasing the size of natural habitats—even if these habitats are protected in nature parks or preserves—increase the chances of species going extinct. Smaller, isolated habitats are like islands, completely separated from one another. As a result, species living in these habitats compete with each other and with humans for limited resources. Since their populations are so small, they have fewer mates with whom...
12 Pages(3000 words)Assignment

The Indigenous Population in the USA

Fighting the Issue of Alcoholism among Native American Population

Booker T. Washington in terms of overcoming addiction says, “Success is to be measured not so much by the position that one has reached in life, as by the obstacles one has overcome trying to succeed.” Therefore, Native Americans are no doubt facing obstacles but they should get rid of their addiction with alcoholism by overcoming the obstacles.
In America, Native Americans have been known to over-indulge in drinking more than any other ethnic group in the country. As a result of this, statistics indicate that nearly 12% of all deaths among the Native Americans are a result of using alcohol (Schinke et al 319). Most cases of traffic accidents, liver and heart problems, and cases of homicide and suicide are relate...
9 Pages(2250 words)Assignment

Why HIV Inmates Shoud Not Be Intergrated with General Population Inmates

... are rarely acquired in prisons owing to various reasons. Also, prisoners already suffering from HIV don`t have any access to antiretroviral treatment, which further complicates the situation of inmates. In most of the cases, even the basic healthcare facilities are not available for the prisoners. A few prisons have also introduced mandatory testing by authorities, but that is deemed as a breach of rights by the activists. Thus, in this scenario, where other alternatives fail to offer a viable solution, the segregation of HIV inmates from generation population inmates, seem to be the only possible solution. In order to understand why HIV inmates must be segregated, it is crucial to understand why then risk is higher in prisons...
8 Pages(2000 words)Research Paper

The Human Population Explosion on a Finite Planet

...The human population explosion on a finite planet: is there a limit to limitless growth? Introduction Accordingto the explanation of Malthuss human population grows exponentially but the important resources like foods and environment grows in an arithmetic rate. He also added that the power of human population is so superior that it creates unnecessary pressure on the important resources of the world. High population growth is not at all a new phenomenon. Its presence was significantly high in the ancient history also. In 1798 Thomas Malthuss published a popular essay of Principle of Population. Over the years it has become a matter of concern for the global fraternity. Various experts across the world have talked about that the finite...
6 Pages(1500 words)Assignment

How Does Population Affect Sustainability

...How Does Population Affect Sustainability? Introduction Sustainable development is referred to as the process through which people meet their needs and raise the quality of their lives while safeguarding the future generation capacity to meet their needs. For most individuals in the society, sustainable life is a high standard of living. High-Income levels and access to technology are some of the factors that are used to determine the standards of living. Intrinsic to the model of sustainability is the equity principle. To be able to attain economic, environmental and social goals such as healthcare, education, and economic opportunity, effective utilization of resources is necessary. This article will examine the effect of population...
8 Pages(2000 words)Assignment
sponsored ads
Save Your Time for More Important Things
Let us write or edit the research paper on your topic "German Population" with a personal 20% discount.
GRAB THE BEST PAPER

Let us find you another Research Paper on topic German Population for FREE!