Comments (0)
Add to wishlistDelete from wishlist
Cite this document
Summary
Both Tim and Brad Larson are entrepreneurs who aspired to manage businesses without any prior experience. However, while Tim began his entrepreneurial career with no financial backing, Brad had the privilege of his father’s financial capital and reputation for obtaining information on potential businesses for acquisition and guidance. …
Download full paperFile format: .doc, available for editing
HIDE THIS PAPERGRAB THE BEST PAPER96.7% of users find it useful 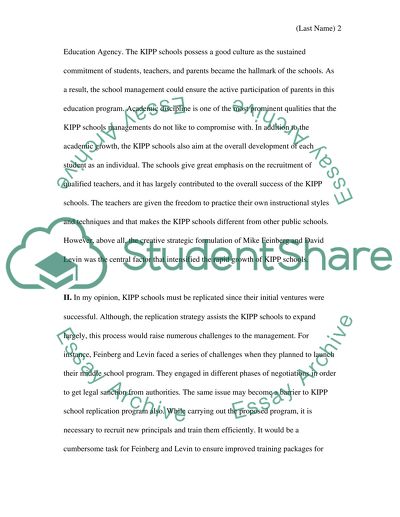 Download file to see previous pages From a detailed case study, it is identified that original KIPP schools in Huston and New York are successful. Huston and New York schools enrolled approximately 300 and 200 students respectively by the end of 1998. It was a great achievement in the American educational history since majority students had been giving little attention to their education till that period. The KIPP schools admit children by blind lottery without considering their prior achievement, special education needs, or bilingual status. In addition, this program forces the parents and students to sign KIPP commitment forms and documents that clearly define various duties and responsibilities of teachers, students, and parents. These practices are the most notable elements of their operational model that set them apart from standard schools. However, the efficient management strategies raised the KIPP schools to the position of charter schools that they received funding and oversight directly from Texas Education Agency. The KIPP schools possess a good culture as the sustained commitment of students, teachers, and parents became the hallmark of the schools. As a result, the school management could ensure the active participation of parents in this education program. Academic discipline is one of the most prominent qualities that the KIPP schools managements do not like to compromise with. In addition to the academic growth, the KIPP schools also aim at the overall development of each student as an individual. The schools give great emphasis on the recruitment of qualified teachers, and it has largely contributed to the overall success of the KIPP schools. The teachers are given the freedom to practice their own instructional styles and techniques and that makes the KIPP schools different from other public schools. However, above all, the creative strategic formulation of Mike Feinberg and David Levin was the central factor that intensified the rapid growth of KIPP schools. II. In my opinion, KIPP schools must be replicated since their initial ventures were successful. Although, the replication strategy assists the KIPP schools to expand largely, this process would raise numerous challenges to the management. For instance, Feinberg and Levin faced a series of challenges when they planned to launch their middle school program. They engaged in different phases of negotiations in order to get legal sanction from authorities. The same issue may become a barrier to KIPP school replication program also. While carrying out the proposed program, it is necessary to recruit new principals and train them efficiently. It would be a cumbersome task for Feinberg and Levin to ensure improved training packages for these new recruits. Presently, revenue for both schools is gained from public funds controlled either by school districts or state agencies. Since major portion of KIPP schools’ economic needs are financed by governmental authorities, the KIPP schools do not face financial crisis. However, the replicated schools may not get adequate financial assistance from government and such a situation would adversely affect this program. Lack of building facilities may also mitigate the effectiveness of new replication program. In addition, the new replication program would meet difficulty in recruiting sufficient fresh batches of fifth graders. Although the initial KIPP school programs are successful, if the students do not give enough priority to their education, it may adversely affect the basic objective of the proposed program. III. It is advisable for Feinberg, Levin, and Hamilton to design a specific path for the implementation of the proposed p ...Download file to see next pagesRead More
Share:
Tags
Cite this document
(“Finding and Evaluating Business Opportunities Case Study - 1”, n.d.)
Retrieved from https://studentshare.org/geography/1415997-case
(Finding and Evaluating Business Opportunities Case Study - 1)
https://studentshare.org/geography/1415997-case.
“Finding and Evaluating Business Opportunities Case Study - 1”, n.d. https://studentshare.org/geography/1415997-case.
Comments (0)
Click to create a comment or rate a document

CHECK THESE SAMPLES OF Finding and Evaluating Business Opportunities

...Introduction Globalization, one of the most hotly debated issues means global capitalism to some while others consider it to be the continuation of modernism with the forces of wealth, progress, democracy and happiness at play (Kellner, 2002). Globalization is considered to be beneficial which promotes economic prosperity, cultural diversity and technological advancement. According to the critical social theory, technology and capital work together to create a new globalized and interconnected world. While each force of globalization is important, technological revolution has impacted the business models, value creation and differentiation (Spelman, 2010). The cloud computing technologies that have made the popular social networking...
7 Pages(1750 words)Coursework
sponsored ads
Save Your Time for More Important Things
Let us write or edit the case study on your topic "Finding and Evaluating Business Opportunities" with a personal 20% discount.
GRAB THE BEST PAPER

Let us find you another Case Study on topic Finding and Evaluating Business Opportunities for FREE!