Comments (0)
Add to wishlistDelete from wishlist
Cite this document
Summary
Ergonomics, Work Methods, Standards and Work Design Case Study (College/University) Section 1 This case study reflects the details of job analysis performed for a wholesale grocery distribution company. The main intention of this program was to identify the ergonomic features of the company with respect to four different job categories such as meat, dairy, grocery, and freezer selectors…
Download full paperFile format: .doc, available for editing
HIDE THIS PAPERGRAB THE BEST PAPER96% of users find it useful 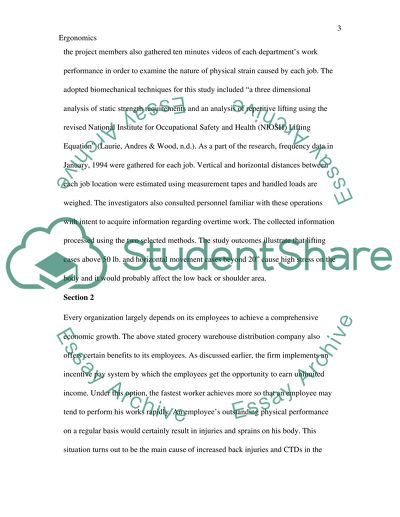 Download file to see previous pages The collected data were tabulated and graphically represented in order to conduct the proposed program more smoothly. The gathered information clearly indicated that back injuries and cumulative trauma disorders (CTD) were very common among the employees. However; among the recordable cases, 30% were back related whereas CTDs constituted only less than 10%. From a detailed analysis, the investigators identified that ‘selectors’ were the group most vulnerable to back injuries while forklift operators maintained the second place. A department-wise study revealed that the grocery department had majorily affected by injuries followed by freezer department and meat and diary departments in second place and third place respectively. Contusions and sprains were outnumbered and hence that could not be brought under the range of this study. In addition to the collection of statistical data, the project members also gathered ten minutes videos of each department’s work performance in order to examine the nature of physical strain caused by each job. The adopted biomechanical techniques for this study included “a three dimensional analysis of static strength requirements and an analysis of repetitive lifting using the revised National Institute for Occupational Safety and Health (NIOSH) Lifting Equation” (Laurie, Andres & Wood, n.d.). As a part of the research, frequency data in January, 1994 were gathered for each job. Vertical and horizontal distances between each job location were estimated using measurement tapes and handled loads are weighed. The investigators also consulted personnel familiar with these operations with intent to acquire information regarding overtime work. The collected information processed using the two selected methods. The study outcomes illustrate that lifting cases above 50 lb. and horizontal movement cases beyond 20” cause high stress on the body and it would probably affect the low back or shoulder area. Section 2 Every organization largely depends on its employees to achieve a comprehensive economic growth. The above stated grocery warehouse distribution company also offers certain benefits to its employees. As discussed earlier, the firm implements an incentive pay system by which the employees get the opportunity to earn unlimited income. Under this option, the fastest worker achieves more so that an employee may tend to perform his works rapidly. An employee’s outstanding physical performance on a regular basis would certainly result in injuries and sprains on his body. This situation turns out to be the main cause of increased back injuries and CTDs in the organization. It has been identified that the grocery selectors are the most affected category of back injuries. The gathered data show that grocery selectors lift a weight of 30 pounds at a frequency of four per minute and this activity continues for eight hours. The asymmetry angle or back twisting angle for this work is 30 degrees. At the same time, meat selectors lift 70 pounds two times in a minute and their job duration is also 8 hours. All other elements remain the same for each ...Download file to see next pagesRead More
Share:
Tags
Cite this document
(“Ergonomics, Work Methods, Satandards and Work Design Case Study”, n.d.)
Retrieved from https://studentshare.org/geography/1413145-ergonomics-work-methods-satandards-and-work-design
(Ergonomics, Work Methods, Satandards and Work Design Case Study)
https://studentshare.org/geography/1413145-ergonomics-work-methods-satandards-and-work-design.
“Ergonomics, Work Methods, Satandards and Work Design Case Study”, n.d. https://studentshare.org/geography/1413145-ergonomics-work-methods-satandards-and-work-design.
Comments (0)
Click to create a comment or rate a document

English being globally considered and established as the ‘lingua franca’ whether in terms of international communications or technological interrelations, hence English as the second language is extensively popularized and most sought after language...
7 Pages(1750 words)Research Paper
sponsored ads
Save Your Time for More Important Things
Let us write or edit the case study on your topic "Ergonomics, Work Methods, Satandards and Work Design" with a personal 20% discount.
GRAB THE BEST PAPER

Let us find you another Case Study on topic Ergonomics, Work Methods, Satandards and Work Design for FREE!