Comments (0)
Add to wishlistDelete from wishlist
Cite this document
Summary
Center of discussion in this paper is The city of Los Angeles and its suburbs as examples of the development of a city as part of a cultural evolution passing through different stages of political and socio-economic reformations in the past…
Download full paperFile format: .doc, available for editing
HIDE THIS PAPERGRAB THE BEST PAPER97.1% of users find it useful 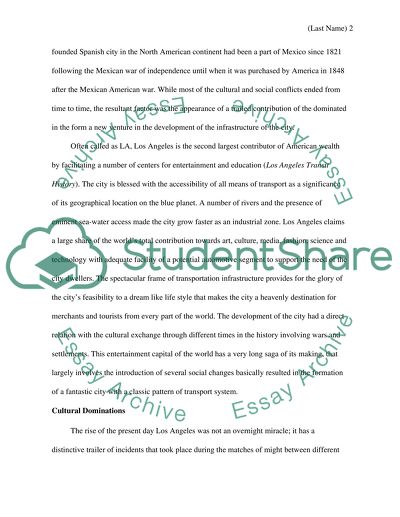 Download file to see previous pages The intention of this study is Los Angeles, the second largest populous city in the United States after New York with the potential to be called the hub of world commerce which deals in almost all aspects of business ranging from motion picture production to manufacture of airplanes. A careful observation of the present-day transport system may be seen as the factor significantly contributed to the new identity of the city’s culture and lifestyle. The present face of the city is a morphing of the ancient culture and territorial history that involved the fights among different communities and races for claiming the identity of the Los Angeles. Los Angeles is a synonym for natural as well as manmade beauty of a landscape; this may be the reason why it is still called as the ‘Land of Angels’. The new face of the city conceals the untold stories of continuous fights by different racial and regional forces to establish their might in the identity, culture, population and history of the city. The 1781 founded Spanish city in the North American continent had been a part of Mexico since 1821 following the Mexican war of independence until when it was purchased by America in 1848 after the Mexican American war. While most of the cultural and social conflicts ended from time to time, the resultant factor was the appearance of a trailed contribution of the dominated in the form a new venture in the development of the infrastructure of the city. ...
The city is blessed with the accessibility of all means of transport as a significance of its geographical location on the blue planet. A number of rivers and the presence of eminent sea-water access made the city grow faster as an industrial zone. Los Angeles claims a large share of the world’s total contribution towards art, culture, media, fashion, science and technology with adequate facility of a potential automotive segment to support the need of the city dwellers. The spectacular frame of transportation infrastructure provides for the glory of the city’s feasibility to a dream like life style that makes the city a heavenly destination for merchants and tourists from every part of the world. The development of the city had a direct relation with the cultural exchange through different times in the history involving wars and settlements. This entertainment capital of the world has a very long saga of its making, that largely involves the introduction of several social changes basically resulted in the formation of a fantastic city with a classic pattern of transport system. Cultural Dominations The rise of the present day Los Angeles was not an overnight miracle; it has a distinctive trailer of incidents that took place during the matches of might between different countries. The identification of the Los Angeles city dates back to the Mexican American war that broke out in 1846 in which California and neighboring regions were invaded by America. As the war ended in 1848, America bought the California including Los Angeles, which then was a small suburb full of migrant people basically belonging to agriculture and livestock management. The exposure of the land to the sea shore and the hill terrains of the topography attracted the Mexican ...Download file to see next pagesRead More
Share:
Tags
Cite this document
(“Los Angeles: New Face from Cultural Transformations Essay”, n.d.)
Retrieved de https://studentshare.org/geography/1391269-los-angeles-new-face-from-cultural-transformations

As a function of this, this book proved to be a pivotal and seminal work within the genre of cross-cultural understanding as, even though it was a novel, it helped to open the eyes of many in and around the country as to the unique set of situations that individuals experienced as a function of not only being bi-racial and living in a juxtaposition of two alternate societies but attempting to draw a sense of personal identity between the two and forging a third as a result. Furthermore, although not the express intent of the book, the issues of assimilation and the firm choice that the second generation immigrant must make between the culture of their parents and the unique aspects of the culture that they have been raised into.
sponsored ads
Save Your Time for More Important Things
Let us write or edit the essay on your topic "Los Angeles: New Face from Cultural Transformations" with a personal 20% discount.
GRAB THE BEST PAPER

Let us find you another Essay on topic Los Angeles: New Face from Cultural Transformations for FREE!