Comments (0)
Add to wishlistDelete from wishlist
Cite this document
Summary
S CORPORATION VS CORPORATION Name Institution Affiliation Date In business there are different types of companies that one can form. These are majorly classed depending on certain characteristics. One of these classes is a corporation. A corporation is a business entity that is autonomously recognized by the law and that has been incorporated…
Download full paperFile format: .doc, available for editing
HIDE THIS PAPERGRAB THE BEST PAPER92.1% of users find it useful 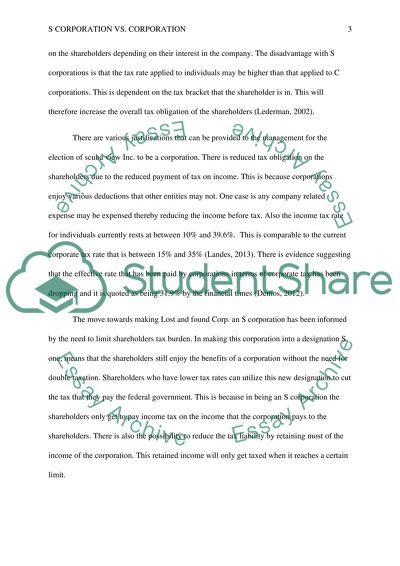 Download file to see previous pages Incorporating as either of these provides shareholders with a number of tax and non tax advantages, which are gained by any company that is incorporated in either of these categories. Focusing on the tax issue, there is the fact that corporations are able in certain situations to help one in reducing their tax obligations. In states where the corporate tax is lower than individual income tax, one can incorporate thereby paying the lower corporate tax. Being a corporation allows the corporation to write down losses that may result from start ups, thereby reducing the tax burden that they have to meet. Corporations are also able to avoid tax by retaining income earned. This will limit the tax burden of the shareholders as well as the corporation. Though there are regulations in place that set a limit to the amount that can be retained without accruing taxation. The flipside that may exist as far as taxation of corporations goes is that of the double taxation effect. This is where the corporation gets to pay tax on its profit. The profit after tax that is then paid to shareholders as dividends is also taxed as income tax. This may be remedied if the corporation is recognized as an S corporation. The advantage of S corporations comes from the single taxation of the corporation’s income. ...
This will therefore increase the overall tax obligation of the shareholders (Lederman, 2002). There are various justifications that can be provided to the management for the election of scuba view Inc. to be a corporation. There is reduced tax obligation on the shareholders due to the reduced payment of tax on income. This is because corporations enjoy various deductions that other entities may not. One case is any company related expense may be expensed thereby reducing the income before tax. Also the income tax rate for individuals currently rests at between 10% and 39.6%. This is comparable to the current corporate tax rate that is between 15% and 35% (Landes, 2013). There is evidence suggesting that the effective rate that has been paid by corporations in terms of corporate tax has been dropping and it is quoted as being 31.9% by the financial times (Demos, 2012). The move towards making Lost and found Corp. an S corporation has been informed by the need to limit shareholders tax burden. In making this corporation into a designation S one, means that the shareholders still enjoy the benefits of a corporation without the need for double taxation. Shareholders who have lower tax rates can utilize this new designation to cut the tax that they pay the federal government. This is because in being an S corporation the shareholders only get to pay income tax on the income that the corporation pays to the shareholders. There is also the possibility to reduce the tax liability by retaining most of the income of the corporation. This retained income will only get taxed when it reaches a certain limit. For an entity to be recognized as an S corporation there are certain criteria that it must meet. To begin with the corporation is only limited to seventy five ...Download file to see next pagesRead More
Share:
Tags
Cite this document
(“S Corporation vs. Corporation Essay Example | Topics and Well Written Essays - 750 words”, n.d.)
S Corporation vs. Corporation Essay Example | Topics and Well Written Essays - 750 words. Retrieved from https://studentshare.org/finance-accounting/1468897-s-corporation-vs-corporation

The justification behind the establishment of Sinopec Corp. was to "diversify the ownership structure, abide by the rules of the market economy, and establish a modern enterprise system". Sinopec Corp. issued 16.78 billion H shares in Hong Kong, New York and London on Oct. 18th and 19th, 2000. The Company floated 2.8 billion A-shares in Shanghai Stock Exchange on July 16th, 2001. The Company’s current total number of shares is 86.702 billion, of which 67.92% is held by the State through Sinopec Group, 9.5% by domestic banks and assets management companies (AMCs), 19.35% by foreign investors and 3.23% by investors at home.
The Company is acknowledged as one of the biggest energy and chemical firms in China. The scope of...
7 Pages(1750 words)Case Study

It is said that “The starting point for my analysis of corporate resource allocation and its governance is a concern with the dynamics of enterprise and economic performance. Central to the process through which successful enterprises and econ...
17 Pages(4250 words)Case Study

6 Pages(1500 words)Coursework
sponsored ads
Save Your Time for More Important Things
Let us write or edit the essay on your topic "S Corporation vs. Corporation" with a personal 20% discount.
GRAB THE BEST PAPER