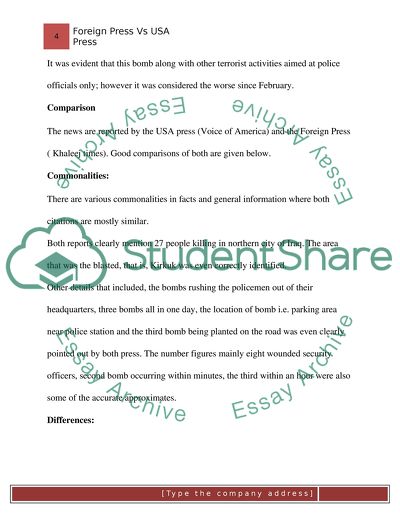 Download file to see previous pages When people were still in shock the next bomb exploded creating wider chaos and fear everywhere. A lot of bodies were left in pieces with boots of police officers scattered all over the scene along with several severed hands. Thereafter ambulances began evacuating casualties of what remains of the dead bodies and injured people. The injured and victims were then taken to hospitals bloodied and bandaged they lay on the floor because of the beds that were already filled with patients. Chaotic scenes unfolded as the doctors and nurses tended to the patients and security officials who were also brought as more victims. Within an hour another bomb exploded taking the list to three bombs all in one day; the last bomb injured almost 8 more security officials. It was evident that this bomb along with other terrorist activities aimed at police officials only; however it was considered the worse since February. Comparison The news are reported by the USA press (Voice of America) and the Foreign Press ( Khaleej times). Good comparisons of both are given below. Commonalities: There are various commonalities in facts and general information where both citations are mostly similar. Both reports clearly mention 27 people killing in northern city of Iraq. The area that was the blasted, that is, Kirkuk was even correctly identified. Other details that included, the bombs rushing the policemen out of their headquarters, three bombs all in one day, the location of bomb i.e. parking area near police station and the third bomb being planted on the road was even clearly pointed out by both press. The number figures mainly eight wounded security officers, second bomb occurring within minutes, the third within an hour were also some of the accurate approximates. Differences: The reports from US press (voice of America) had a very short note due to which places of disparities reduced naturally in the report. Still in some areas the problem was sighted this included mainly in the title. Whereeas th Foreign Press (Khaleej Times) mentioned two bombs killing 27 people the USA Press (Voice of America) mentioned series of bomb killing 27 people. At first side any addressee would comprehend the word “series” as more than two bombs, which could be a wrong view, thus the title could be said as an exaggerated one to draw attention. The second difference sighted were in the distance of Kirkuk from north of Baghdad. Where Foreign Press (Khaleej Times) mentioned 290 kilometers the USA Press (Voice of America) mentioned it as 250 kilometers. This was a factual data and such error must not have occurred. News # 2: At least 18 killed in Baghdad jail fight The article reported the killing in Baghdad prison flight. It all started when one of the Al-Qaeda leaders, Huthaifa al-Battawi, who was reported as the Emir of Baghdad and also the planned attacker at a Catholic Church, wrestled with one of the security guards in an attempt to flee off the prison with other of his inmates. In fighting between the security officers and the prisoners he got killed along with many others from security guards and prisoners either injured or killed. Commonalities: Both the USA Press (Voice of America) and the Foreign Press (Khaleej times) agreed on Huthaifa al-Battawi death, his wrestling for gun from a guard and him being the one who planned attack at Catholic Church back in October . Differences: There are various ...Download file to see next pagesRead More
Share:
Tags
Cite this document
(“Foreign Press vs. U.S. Press Essay Example | Topics and Well Written Essays - 750 words”, n.d.)
Retrieved from https://studentshare.org/environmental-studies/1422546-foreign-press-vs-us-press
(Foreign Press Vs. U.S. Press Essay Example | Topics and Well Written Essays - 750 Words)
https://studentshare.org/environmental-studies/1422546-foreign-press-vs-us-press.
“Foreign Press Vs. U.S. Press Essay Example | Topics and Well Written Essays - 750 Words”, n.d. https://studentshare.org/environmental-studies/1422546-foreign-press-vs-us-press.
Comments (0)
Click to create a comment or rate a document

CHECK THESE SAMPLES OF Foreign Press vs. U.S. Press

However, political instability and turmoil are yet a few of the hindrances which could affect the stock markets and in a worst-case scenario may as well, completely shut down businesses (Root 1982). The new business practices, on the other hand, involve a transparent setup and a free market, free of turmoil to operate and maximize production (Bennett 1998). Also, in such a case, the consumer must also be able to spend on the product, to make it a success. However, Burma currently has strong institutions having a hold on the resources which need to be exploited, i.e. a few of the military generals and autocrats have access to the resources, and thus, dealing with these groups might prove to be a waste of the corporation`s own effor...
6 Pages(1500 words)Assignment
sponsored ads
Save Your Time for More Important Things
Let us write or edit the essay on your topic "Foreign Press vs. U.S. Press" with a personal 20% discount.
GRAB THE BEST PAPER

Let us find you another Essay on topic Foreign Press vs. U.S. Press for FREE!