Comments (0)
Add to wishlistDelete from wishlist
Cite this document
Summary
Strong public opinion and media influence can change the complete political scene of any country. No government can survive without public and media support. There is no doubt that public influence and mass media have a great impact on foreign policy decision making.
…
Download full paperFile format: .doc, available for editing
HIDE THIS PAPERGRAB THE BEST PAPER95.2% of users find it useful 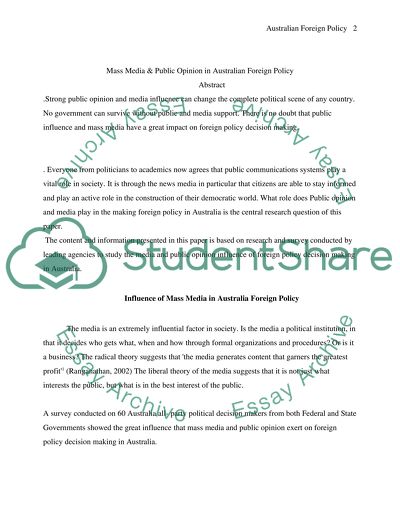 Estimating corruption is always difficult because people never reveal the facts of corruption that they are involved in. Politicizing public service often becomes a major problem and this reprehensible practice was introduced during the regime of the Labour party government and was continued by the Coalition government. Due to this, the public servants have slowly commenced to divest themselves of accountability towards parliament or to the code of conduct (McLennan, 2004).<...

..., a viable market economy and the capacity of the Nation to abide by the policies of the European Union. The Commission screens the suitability of the country in the light of 35”chapters” like food safety, agriculture, energy and transport policies, foreign and security policies etc. Before the negotiations begin, the country may be asked to fulfill certain benchmarks, and the procedure varies depending on the merit of the applying country. The country must indicate a time-line for the implementation of the EU policies and processes. “When all negotiations are complete to the unanimous satisfaction of the member countries, a Draft Accession Treaty is compiled and submitted to the Council, Commission, Parliament and member countries...
9 Pages(2250 words)Case Study

However, political instability and turmoil are yet a few of the hindrances which could affect the stock markets and in a worst-case scenario may as well, completely shut down businesses (Root 1982). The new business practices, on the other hand, involve a transparent setup and a free market, free of turmoil to operate and maximize production (Bennett 1998). Also, in such a case, the consumer must also be able to spend on the product, to make it a success. However, Burma currently has strong institutions having a hold on the resources which need to be exploited, i.e. a few of the military generals and autocrats have access to the resources, and thus, dealing with these groups might prove to be a waste of the corporation`s own effor...
6 Pages(1500 words)Assignment
sponsored ads
Save Your Time for More Important Things
Let us write or edit the essay on your topic "Australian Foreign Policy" with a personal 20% discount.
GRAB THE BEST PAPER

Let us find you another Essay on topic Australian Foreign Policy for FREE!