The food crisis of 2008 had been threatening for a few years, mostly affecting the poor. A variety of causes but mostly mad-made - Essay Example

Comments (0)
Add to wishlist Delete from wishlist
Cite this document
Summary
Running Head: Food Crisis Food Crisis Food Crisis During the last few decades, the world has undergone substantial development and advancement in the domain of science and technology, but this growth have moreover experienced by the populace of developed nations…
Download full paper File format: .doc, available for editing
HIDE THIS PAPERGRAB THE BEST PAPER96% of users find it useful 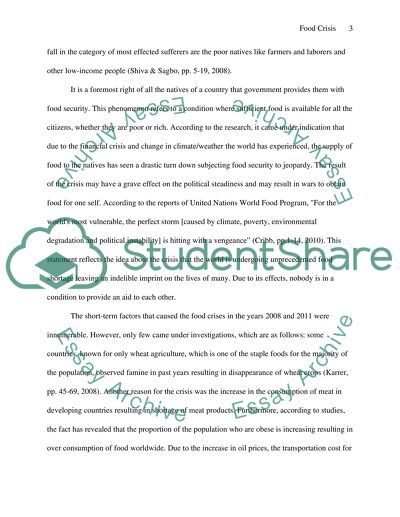 Extract of sample "The food crisis of 2008 had been threatening for a few years, mostly affecting the poor. A variety of causes but mostly mad-made"

Download file to see previous pages 5-19, 2008). This crisis was one of the threatening incidents that not only affected a big faction of the human race who died of hunger and malnourishment but also grabbed the attention of the developed nations to the fact that with their increase in wealth, they are not performing adequately to surmount the world’s dilemmas and concerns. It has been an observation that the prosperous, successful, and developed countries have the least priority to nourish the starving population, though they have sufficient amount of food that they can provide to the entire inhabitants of the globe. One cannot ignore the reality that governments and United Nations need to put a lot of endeavor in such crises to embark on the problem of hunger. As there is a connection between different problems, resolving of one will lead to solve others as well. The food crises resulted in the sky-high prices of food. As an outcome of it, the fuel prices augmented due to the growing demand from the emergent nations. With the increase in cost of commodities like food, fuel etc, and the unchanging income pattern of the individuals, it became difficult for them to pay for the basic and fundamental needs like food. The people that fall in the category of most effected sufferers are the poor natives like farmers and laborers and other low-income people (Shiva & Sagbo, pp. 5-19, 2008). It is a foremost right of all the natives of a country that government provides them with food security. This phenomenon refers to a condition where sufficient food is available for all the citizens, whether they are poor or rich. According to the research, it came under indication that due to the financial crisis and change in climate/weather the world has experienced, the supply of food to the natives has seen a drastic turn down subjecting food security to jeopardy. The result of the crisis may have a grave effect on the political steadiness and may result in wars to obtain food for one self. According to the reports of United Nations World Food Program, "For the world's most vulnerable, the perfect storm [caused by climate, poverty, environmental degradation and political instability] is hitting with a vengeance” (Cribb, pp.1-14, 2010). This statement reflects the idea about the crisis that the world is undergoing unprecedented food shortage leaving an indelible imprint on the lives of many. Due to its effects, nobody is in a condition to provide an aid to each other. The short-term factors that caused the food crises in the years 2008 and 2011 were innumerable. However, only few came under investigations, which are as follows: some countries, known for only wheat agriculture, which is one of the staple foods for the majority of the population, observed famine in past years resulting in disappearance of wheat crops (Karrer, pp. 45-69, 2008). Another reason for the crisis was the increase in the consumption of meat in developing countries resulting in shortage of meat products. Furthermore, according to studies, the fact has revealed that the proportion of the population who are obese is increasing resulting in over consumption of food worldwide. Due to the increase in oil prices, the transportation cost for carrying foods from farm to market has also risen, adding to the food prices (Karrer, pp. 45-69, 2008). Where global recession has terribly crushed the powerful economies, ...Download file to see next pages Read More
Share:
Tags
Cite this document
(“The food crisis of 2008 had been threatening for a few years, mostly Essay”, n.d.)
Retrieved from https://studentshare.org/environmental-studies/1422157-the-food-crisis-of

(The Food Crisis of 2008 Had Been Threatening for a Few Years, Mostly Essay)
https://studentshare.org/environmental-studies/1422157-the-food-crisis-of.

“The Food Crisis of 2008 Had Been Threatening for a Few Years, Mostly Essay”, n.d. https://studentshare.org/environmental-studies/1422157-the-food-crisis-of.
Comments (0)
Click to create a comment or rate a document

CHECK THESE SAMPLES OF The food crisis of 2008 had been threatening for a few years, mostly affecting the poor. A variety of causes but mostly mad-made

However, like many organizations, the World Food Program has its own crises that have apparently affected its programs and projects in all parts of the world. These problems, which will be discussed later, limit WFPs' capacity to distribute its resources and services to distressed countries like Ethiopia. It must be noted that in recent years, food rationing was cut by one third (WFP, 2008). In September 2008, WFP published its Media Backgrounder on Ethiopia which reported that the organization targets to support 9.6 million Ethiopians as well as its funding shortage of US$ 465 million. It also recorder 567,000 metric tons shortage of food which will last until March 2009 (WFP, 2008).
Ethiopia has been among the poorest and l...
9 Pages (2250 words) Assignment

The need for the procedure had been stressed due to the abundance of children who had experienced trauma or even any form of neglect. The study then includes the victims of abuse, domestic violence and even lack of needed attention while the child is growing up. To be able to lessen such effects in the lives of the children, the said types of therapy are continuously developed (Barnes, p. 40).
There are different ways to be able to help a child. These constitute the provision of emotional care which can answer the needs of the child in different aspects most especially the emotional and behavioural facets. For example, the simple act of making sounds and having eye contact with another person during the period of infancy can...
7 Pages (1750 words) Case Study

The study investigates divergent sociological views by making a comparison of these researches and concludes that sensational pleasures, domestic turmoil and biological characteristics play a dominant role in women’s involvement in illegal drug addiction.
Illegal drugs refer to the drugs consumption and trading of which is strictly prohibited according to the prevailing statutes of law. Excessive trade and trafficking of illegal drugs have accelerated their application among adults, minors and women, which have, consequently, brought critical health problems for the consumers in their wake. There was a time when drug addiction was considered to be a masculine activity only, and women had no concern with drug usage. With...
7 Pages (1750 words) Coursework

The number of factors or attributes desired from the vendor is vast, and different organizations and different industries place different importance on the attributes (Sonmat, 2006). Some of the vendor attributes may gain importance owing to the nature of the industry, for example, in the case of consumer perishables suppliers, like fresh vegetables or fruits, the buying firm would...
20 Pages (5000 words) Literature review
sponsored ads
Save Your Time for More Important Things
Let us write or edit the essay on your topic "The food crisis of 2008 had been threatening for a few years, mostly affecting the poor. A variety of causes but mostly mad-made" with a personal 20% discount.
GRAB THE BEST PAPER

Let us find you another Essay on topic The food crisis of 2008 had been threatening for a few years, mostly affecting the poor. A variety of causes but mostly mad-made for FREE!