Comments (0)
Add to wishlist Delete from wishlist
Cite this document
Summary
Singaporean humour: A Cross-Cultural, Cross-Gender Comparison Summary of Reading In their joint venture entitled; Singaporean humour: A Cross-Cultural, Cross-Gender Comparison, Ofra Nevo et al. describe the topic, ‘the universality of humour behavior and cultural, gender variations in the content and use of humour.’ Authors begin their work with a brief introduction about humour…
Download full paper File format: .doc, available for editing
HIDE THIS PAPERGRAB THE BEST PAPER93.5% of users find it useful 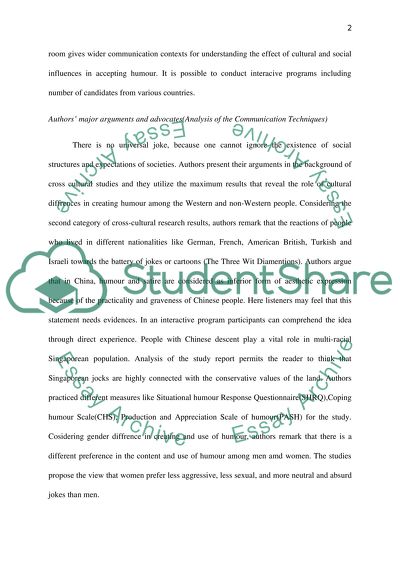 Download file to see previous pages Here the authors analyse the responses of 119 undergraduate students at the National University of Singapore through three self report questionnaires. Authors make comparison between the reactions of Isreali and U.S. students, and the students from Singapore University. The analysis leads the authors to the conclusion that unlike Isreali or U.S students, Singaporeans choose a great amount of humour related with aggressive content, and relatively fewer jokes or humour with sexual content. Communication situation It is possible to relate my own experience with the arguments provided by the authors in the given reading. Instead of giving various research tools, learner can conduct an interact classroom which includes students from Singapore, U.S. and Isreal. The istructor is communicating with the students about the way various people produce and enjoy humour and humour related situations. The outcome of this interactive section is some thing different. Here each candidate gets correct information through real experience. The interactive class room gives wider communication contexts for understanding the effect of cultural and social influences in accepting humour. It is possible to conduct interacive programs including number of candidates from various countries. Authors’ major arguments and advocates(Analysis of the Communication Techniques) There is no universal joke, because one cannot ignore the existence of social structures and expectations of societies. Authors present their arguments in the background of cross cultural studies and they utilize the maximum results that reveal the role of cultural diffrences in creating humour among the Western and non-Western people. Considering the second category of cross-cultural research results, authors remark that the reactions of people who lived in different nationalities like German, French, American British, Turkish and Israeli towards the battery of jokes or cartoons (The Three Wit Diamentions). Authors argue that in China, humour and satire are considered as inferior form of aesthetic expression because of the practicality and graveness of Chinese people. Here listeners may feel that this statement needs evidences. In an interactive program participants can comprehend the idea through direct experience. People with Chinese descent play a vital role in multi-racial Singaporean population. Analysis of the study report permits the reader to think that Singaporean jocks are highly connected with the conservative values of the land. Authors practiced different measures like Situational humour Response Questionnaire(SHRQ),Coping humour Scale(CHS), Production and Appreciation Scale of humour(PASH) for the study. Cosidering gender diffrence in creating and use of humour, authors remark that there is a different preference in the content and use of humour among men amd women. The studies propose the view that women prefer less aggressive, less sexual, and more neutral and absurd jokes than men. Incomparison with interactive learning system, the communication strategy used by the authors is not an easy one. Listeners may feel uncertainity in understanding the real message. It lacks cohesiveness and listeners often fail to reach the conclusion. In an interactive ...Download file to see next pages Read More
Share:
Tags
Cite this document
(“Singaporean Humor: A Cross-Cultural, Cross-Gender Comparison Essay”, n.d.)
Retrieved from https://studentshare.org/environmental-studies/1422112-singaporean-humor-a-cross-cultural-cross-gender

CHECK THESE SAMPLES OF Singaporean Humor: A Cross-Cultural, Cross-Gender Comparison

Humor is one of the methods and strategies used by medical professionals to support a client and create positive feelings and emotions. Responsibility of a nurse is to ensure that a thorough assessment is made of the client's health concerns, that suitable nursing actions are chosen and implemented to help clients, and that an evaluation of the results is carried out. Assuming this leadership does not mean that nurses take over and do for, or to, clients. The quality of nursing care is determined by the completeness of the interchange of knowledge, attitudes, and skills between nurses and their clients. To be most helpful to all clients, nurses should make sure that they solicit their knowledge, become aware of their feelings and...
15 Pages (3750 words) Case Study

It wasn’t until the establishment of The Juvenile Justice Courts were children offici...
6 Pages (1500 words) Research Proposal
sponsored ads
Save Your Time for More Important Things
Let us write or edit the essay on your topic "Singaporean Humor: A Cross-Cultural, Cross-Gender Comparison" with a personal 20% discount.
GRAB THE BEST PAPER

Let us find you another Essay on topic Singaporean Humor: A Cross-Cultural, Cross-Gender Comparison for FREE!