Comments (0)
Add to wishlistDelete from wishlist
Cite this document
Summary
Environmental Audit - Russia Organizations is maximum sectors including in Information Technology sector (IT) will always want to expand their horizons and cross into new territories. After achieving success in their home operations or importantly to tap the good opportunities in the foreign market, the organizations will initiate the entry…
Download full paperFile format: .doc, available for editing
HIDE THIS PAPERGRAB THE BEST PAPER96.6% of users find it useful 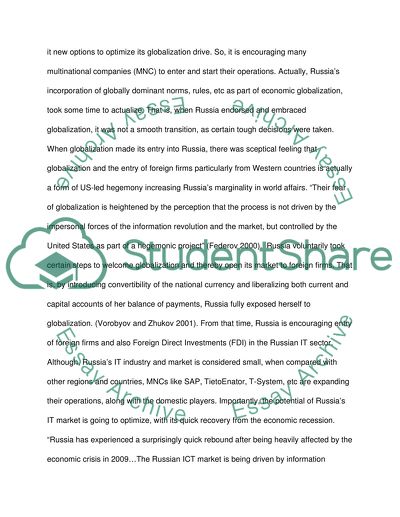 Download file to see previous pages There may many country specific factors, which could impact the functioning of the organization in the Host country, including its Human Resource (HR) functions. When an organization starts off its foreign operations, the role of HR department and optimum HR practices is crucial because it can only facilitate and encourage coordination and cooperation between employees from both the host country as well as home country (company’s home country). In this report, Russia is the host country, and so this report will discuss how a multinational company in IT sector, while entering Russia particularly in the form of Joint Venture (JV) need to analyse its HR functions to optimally manage its operations there. Economic Indicators Russia's geographic position as neighbour and a key influencer of the expanding European Union and the dynamic countries of Asia including China and India has given it new options to optimize its globalization drive. So, it is encouraging many multinational companies (MNC) to enter and start their operations. Actually, Russia’s incorporation of globally dominant norms, rules, etc as part of economic globalization, took some time to actualize. That is, when Russia endorsed and embraced globalization, it was not a smooth transition, as certain tough decisions were taken. When globalization made its entry into Russia, there was sceptical feeling that globalization and the entry of foreign firms particularly from Western countries is actually a form of US-led hegemony increasing Russia’s marginality in world affairs. “Their fear of globalization is heightened by the perception that the process is not driven by the impersonal forces of the information revolution and the market, but controlled by the United States as part of a hegemonic project” (Federov 2000). Russia voluntarily took certain steps to welcome globalization and thereby open its market to foreign firms. That is, by introducing convertibility of the national currency and liberalizing both current and capital accounts of her balance of payments, Russia fully exposed herself to globalization. (Vorobyov and Zhukov 2001). From that time, Russia is encouraging entry of foreign firms and also Foreign Direct Investments (FDI) in the Russian IT sector. Although, Russia’s IT industry and market is considered small, when compared with other regions and countries, MNCs like SAP, TietoEnator, T-System, etc are expanding their operations, along with the domestic players. Importantly, the potential of Russia’s IT market is going to optimize, with its quick recovery from the economic recession. “Russia has experienced a surprisingly quick rebound after being heavily affected by the economic crisis in 2009…The Russian ICT market is being driven by information technology spending, which is expected to increase by 12 percent to 15 billion euros in 2011.” (eito.com 2011) Comparative analysis of HR systems in both Europe and the US Each nation is different from one another based on their culture, people, language, climate, etc, etc…and based on these differences; there will be different styles of HRM. Thus, different management styles and importantly HRM policies seen in the functioning of MNCs are dependent on the culture and other regional factors of a country. That is, when one focuses on the HRM policies in USA, it ...Download file to see next pagesRead More
Share:
Cite this document
(“Environmental Audit (Data Response) Essay Example | Topics and Well Written Essays - 1500 words”, n.d.)
Retrieved from https://studentshare.org/environmental-studies/1421524-environmental-audit-data-response
(Environmental Audit (Data Response) Essay Example | Topics and Well Written Essays - 1500 Words)
https://studentshare.org/environmental-studies/1421524-environmental-audit-data-response.
“Environmental Audit (Data Response) Essay Example | Topics and Well Written Essays - 1500 Words”, n.d. https://studentshare.org/environmental-studies/1421524-environmental-audit-data-response.
Comments (0)
Click to create a comment or rate a document

Audit risk should be estimated to a low level that will provide sufficient evidential material to obtain reasonable assurance in order to issue an opinion on financial statements.
Michelmerish Brick Holding Plc’s (MBHP) business consists of the production of clay products, landfill operations, and development of land. The operational profits in 2007 increased matching with the rise in revenue when compared to the performance with 2006. Under such a scenario of hugely increased operational activities, the acceptable low level of audit risk is a matter that may be determined by evaluating the auditor’s reliance on the extent and efficacy of internal controls in operation with MBHP. Besides the assessment of the acce...
7 Pages(1750 words)Assignment

There are different ways, which have been used to evaluate the performance of the banks. When the performance is analysed through available published...
7 Pages(1750 words)Case Study
sponsored ads
Save Your Time for More Important Things
Let us write or edit the essay on your topic "Environmental Audit (Data Response)" with a personal 20% discount.
GRAB THE BEST PAPER

Let us find you another Essay on topic Environmental Audit (Data Response) for FREE!