Comments (0)
Add to wishlistDelete from wishlist
Cite this document
Summary
Swarna1 Word count : 3003 Order#: 530816 Dated 11th May 2011 Employment Law Part 1: Advise Tom as to whether or not he may be able to claim unfair dismissal from Unfit. Tom has to analyze the conditions of the contract made between him and Unifit Ltd. Before proceeding for further action…
Download full paperFile format: .doc, available for editing
HIDE THIS PAPERGRAB THE BEST PAPER93.7% of users find it useful 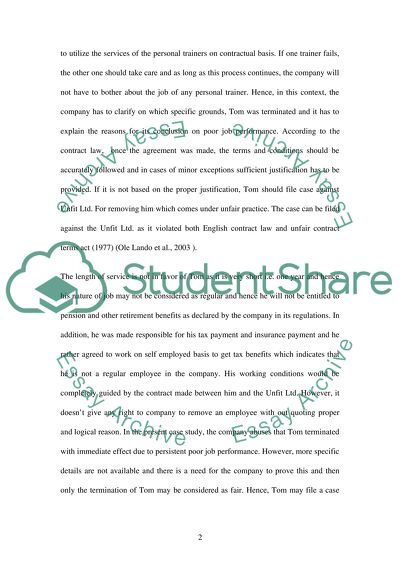 Download file to see previous pages or not? If it is proven that he is a regular or permanent employee, his right for continuing in the job would be very genuine unless he is indulged in illegal activity or unethical practice at work place. Various tests have to be applied for determining the nature of job performed by Tom. In the contract, it was mentioned that he was not able to avail the sick leave and pension benefits which suggests that he is not a regular employee. Moreover, Tom was assured of at least 20 training sessions which also indicates that his job is more of a contractual in nature. In case of his inability to attend the sessions due to his sickness, there is a clause for substituting him with another personal trainer with the permission of the company. This also indicates the intention of the company to utilize the services of the personal trainers on contractual basis. If one trainer fails, the other one should take care and as long as this process continues, the company will not have to bother about the job of any personal trainer. Hence, in this context, the company has to clarify on which specific grounds, Tom was terminated and it has to explain the reasons for its conclusion on poor job performance. According to the contract law, once the agreement was made, the terms and conditions should be accurately followed and in cases of minor exceptions sufficient justification has to be provided. If it is not based on the proper justification, Tom should file case against Unfit Ltd. For removing him which comes under unfair practice. The case can be filed against the Unfit Ltd. as it violated both English contract law and unfair contract terms act (1977) (Ole Lando et al., 2003 ). The length of service is not in favor of Tom as it is very short i.e. one year and hence his nature of job may not be considered as regular and hence he will not be entitled to pension and other retirement benefits as declared by the company in its regulations. In addition, he was made responsible for his tax payment and insurance payment and he rather agreed to work on self employed basis to get tax benefits which indicates that he is not a regular employee in the company. His working conditions would be completely guided by the contract made between him and the Unfit Ltd. However, it doesn’t give any right to company to remove an employee with out quoting proper and logical reason. In the present case study, the company abuses that Tom terminated with immediate effect due to persistent poor job performance. However, more specific details are not available and there is a need for the company to prove this and then only the termination of Tom may be considered as fair. Hence, Tom may file a case against Unfit Ltd. As it violated the principles of European contract law (The commission on European contract law, 1999) In addition, the removal process must be in conformity with the contract clauses made between the Unfit Ltd. and Tom. There are different clauses like requirement of wearing an uniform supplied by the company, requirement of utilizing the company’s equipment and support staff, allocation of atleast 20 sessions for personal training of the company’s employees. In the present case, there is no evidence that Tom violated any one of these clauses and hence his termination is illogical and he can claim in court of law against the Unfit Ltd. for unfair dismissal. The company dismissed Tom with out any notice which is also not fair and violation of the contract made ...Download file to see next pagesRead More
Share:
Tags
Cite this document
(“Employment Law Essay Example | Topics and Well Written Essays - 3000 words - 2”, n.d.)
Retrieved from https://studentshare.org/environmental-studies/1419509-employment-law
(Employment Law Essay Example | Topics and Well Written Essays - 3000 Words - 2)
https://studentshare.org/environmental-studies/1419509-employment-law.
“Employment Law Essay Example | Topics and Well Written Essays - 3000 Words - 2”, n.d. https://studentshare.org/environmental-studies/1419509-employment-law.
Comments (0)
Click to create a comment or rate a document

New and complex issues have arisen which demanded fresh understanding and handling of cases involved them. This has resulted in the enhanced development of specialized laws e.g. cyber laws and interpretation of those laws. The same is true with Media Laws. Media has developed much in the last half-century. As it evolved as a profession and more people started to join it, there arose the levels of money involved in it. With this grew the contractual obligations on the parts of parties and concerned laws e.g. patent laws, privacy laws, and copyrights laws, etc. also started to play their parts. With these issues, the role of law in the media industry also reached a new height.
Mathew Fisher, the appellant, joined a band with Mr...
6 Pages(1500 words)Assignment
sponsored ads
Save Your Time for More Important Things
Let us write or edit the essay on your topic "Employment Law" with a personal 20% discount.
GRAB THE BEST PAPER

Let us find you another Essay on topic Employment Law for FREE!