The Visitation of the Gods - Assignment Example

Comments (0)
Add to wishlistDelete from wishlist
Cite this document
Summary
The plot of the story under consideration is marked by both internal and external conflict. The internal conflict exists in the form of the tussle between the ideals of Miss Noel as a teacher and her low profile, but discernable ambition as a young person…
Download full paperFile format: .doc, available for editing
HIDE THIS PAPERGRAB THE BEST PAPER95.4% of users find it useful 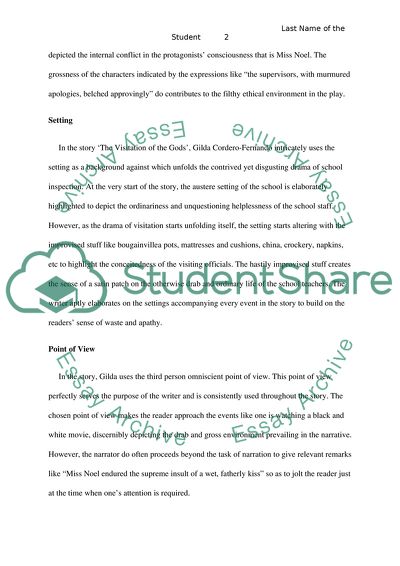 Extract of sample "The Visitation of the Gods"

﻿The Visitation of the Gods
Plot
The plot of the story under consideration is marked by both internal and external conflict. The internal conflict exists in the form of the tussle between the ideals of Miss Noel as a teacher and her low profile, but discernable ambition as a young person. The external conflict exists at various levels as to the conflict between the aspirations of the teachers and the Principal’s shrewdness, the conflict between the teachers enhanced by their desire to seek favors from the officials, the conflict between the perceptions of Mr. Sawit and Miss Noel as to teaching and education. The writer does succeed in creating a sense of apathy by exploiting expected events. The plot is unconventional and the events effortlessly flow into each other to give way to a sense of unity
Characterization
Miss Noel, a young and idealistic teacher is the main protagonist, which acts as a suitable foil to the somewhat less upright and opportunistic Principal and the supervisors. The characters in the story are somewhat flat, especially the visiting officials. The writer on purpose has kept the antagonists flat to enhance the sense of apathy and hopelessness permeating the story. This provides a suitable and grave background against which is depicted the internal conflict in the protagonists’ consciousness that is Miss Noel. The grossness of the characters indicated by the expressions like “the supervisors, with murmured apologies, belched approvingly” do contributes to the filthy ethical environment in the play.
Setting
In the story ‘The Visitation of the Gods’, Gilda Cordero-Fernando intricately uses the setting as a background against which unfolds the contrived yet disgusting drama of school inspection. At the very start of the story, the austere setting of the school is elaborately highlighted to depict the ordinariness and unquestioning helplessness of the school staff. However, as the drama of visitation starts unfolding itself, the setting starts altering with the improvised stuff like bougainvillea pots, mattresses and cushions, china, crockery, napkins, etc to highlight the conceitedness of the visiting officials. The hastily improvised stuff creates the sense of a satin patch on the otherwise drab and ordinary life of the school teachers. The writer aptly elaborates on the settings accompanying every event in the story to build on the readers’ sense of waste and apathy.
Point of View
In the story, Gilda uses the third person omniscient point of view. This point of view perfectly serves the purpose of the writer and is consistently used throughout the story. The chosen point of view makes the reader approach the events like one is watching a black and white movie, discernibly depicting the drab and gross environment prevailing in the narrative. However, the narrator do often proceeds beyond the task of narration to give relevant remarks like “Miss Noel endured the supreme insult of a wet, fatherly kiss” so as to jolt the reader just at the time when one’s attention is required.
Total Words: 500 (2 pages)
References
Cordero-Fernando, Gilda, The Visitation of the Gods. Read More
Share:
Tags
Cite this document
(“The Visitation of the Gods Assignment Example | Topics and Well Written Essays - 500 words”, n.d.)
The Visitation of the Gods Assignment Example | Topics and Well Written Essays - 500 words. Retrieved from https://studentshare.org/english/1732238-reaction-paper-to-short-story-the-visitation-of-the-gods-bygilda-cordero-fernando

“The Visitation of the Gods Assignment Example | Topics and Well Written Essays - 500 Words”, n.d. https://studentshare.org/english/1732238-reaction-paper-to-short-story-the-visitation-of-the-gods-bygilda-cordero-fernando.
Comments (0)
Click to create a comment or rate a document

CHECK THESE SAMPLES OF The Visitation of the Gods

...?Do you agree with Menken that these are now dead gods? Yes, I absolutely agree with Menken that these are now dead gods. I consider these gods as dead because, as Menken pointed out, nobody worship or even remember them (Mencken 1). Just as the memory of a dead man is lost and forgotten except among his lovers, so also the memory of these gods is lost and forgotten. Take for instance, Huitzilopochtli, who was the national god of the Aztec of Tenochtitlan and the most celebrated and feared of all the gods of the ancient Aztec (Andrews 223). The Aztec built a great temple on the Pyramid in Tenochtitlan in his honor. At its completion ceremonies, it is reported that more than 20,000 human sacrifices were offered in a four day celebration...
4 Pages(1000 words)Term Paper

... with the Indian Americans, as they prefer being called (Ryan 125). This paper is a critical evaluation of the way of life of the Native Americans, precisely their mythology. The Native Americans have their religions and traditions, which they never relinquished even after the European Americans tried to assimilate them to no avail. One major component of these religions is the belief in deities or gods, whom they worship whenever they are faced with different challenges (Malone 23). These are for example the Kokopelli, who is regarded as the god of fertility among North American native communities such as the Hopi and the Zunis. He is referred to as the god of fertility and is perceived as the one who blesses women with children...
3 Pages(750 words)Essay

...? Summary: Gods of Management Introduction The book d Gods of Management was ed by Charles Handy and this book concentrates on providing insight regarding different kinds of management styles (Handy, 1995). Through this book, Handy provides its audience with insight regarding four different cultures and how people within these cultures operate. In this book, the author uses four different gods of the Greek era to create a presentation of the four cultures. He recognizes these cultures as club, role, task as well as existential and the Gods associated with these cultures includes Zeus, Apollo, Athena as well as Dionysus. Book Summary The first culture described by Handy is recognized as the club and utilizes the figure of a spider web...
3 Pages(750 words)Book Report/Review

The Visitation of the Gods by Gilda Cordero-Fernando

... in the play. In the story ‘The Visitation of the Gods,’ Gilda Cordero-Fernando intricately uses the setting as a background against which unfolds the contrived yet disgusting drama of school inspection. At the very start of the story, the austere setting of the school is elaborately highlighted to depict the ordinariness and unquestioning helplessness of the school staff. However, as the drama of visitation starts unfolding itself, the setting starts altering with the improvised stuff like bougainvillea pots, mattresses, and cushions, china, crockery, napkins, etc. to highlight the conceitedness of the visiting officials. The hastily improvised stuff creates the sense of a satin patch on the otherwise drab and ordinary life...
1 Pages(250 words)Essay

...GODS AND HUMANS Part of the reason both Oedipus and Antigone are considered to be ic works is that they feature characters who are larger than life and whose deeds are truly remarkable. Even centuries and millennium later the human and divine figures featured in these stories astonish us with their extreme and powerful qualities. We can marvel at these classical figures but we can also examine the different ways they interact with one another and the sorts of relationships they have with one another, plus the different ways Sophocles portrays them. Surely this interplay is one of the reasons these figures continue to resonate in our modern days and continue to excite us so much. The conflict between the world and laws of humans and those...
3 Pages(750 words)Assignment

...﻿God’s command God had asked Moses to collect all the staff members along with your brother and talk to a rock in front of their eyes and water will start flowing out of the rock. In response to God’s command, Mosses collected the Israelites and his brother and went to the rock and instead of talking to the rock, Mosses simply hit the rock two times with a stick and water started flowing out of the rock (Bailey 71). Due to this the God decided to disallow all the Israelites from entering the Promised Land which is believed to be a replication of heaven. God did not allow them to enter the Promised Land as Moses and Aaron had disrespected God and showed God that they do not trust him/her. There are various takeaways from this passage...
2 Pages(500 words)Essay

... Part A. The Most Beautiful Object in the Museum Inverted Theme1 of Work: Inverted Theme USA (A House of a Song Bird) Artist: Simon Starling Artist’s Country: England Year of Work: (2002) Material used: Tree trunks, iron, wood, birds Size/Dimensions: 133 x 122 x140 inches Place: Perez Art Museum Miami Thoughts and questions I am taken by surprise looking at this art piece. In one glance, it looks weak as if it might fall anytime. The big sized bird houses (rectangular cubes) are balanced on thin sticks. The first thought is what could be the purpose of this artwork. Then it unveils the mystery how fragile ‘things’ can lift enormous weights if they can balance them. Feelings and thoughts The thoughts in my mind... Part A. The Most...
3 Pages(750 words)Essay

... Introduction: This paper examines the influence of gods and goddesses in the Rome. The Roman myths emanated from a mixture of the various beliefs of the Greek people. Most gods that the Romans worshipped came from the Greeks1. The Romans believed in many gods and goddesses and all of these gods and goddesses had their specialized role in this society. A god like Mars for example would help in fighting fearsome battles and this meant he had most of the soldiers at heart2. In case of battles soldiers could be found to be praying to this Mars for spiritual and physical strength. The Religious Beliefs of the Romans: The Roman gods had a strange mix of influences. As Rome grew in size, so was their superstitions...
5 Pages(1250 words)Research Paper

... Civic Learning A visit to the drug rehabilitation facility provided the insight necessary to be an effective active citizen. In a drug counselling session, a client is led to discuss personal issues that can trigger a lot of unpleasant feelings. Through the concept of argument, the patient expresses feelings and not just facts while actively engaging in their defense. The patient gets assisted to get in touch with these feelings as the counselor explains how they affect an individual. This approach is necessary because the client needs a personal understanding for recovery to take place. Denial is part of the addiction; justification, blaming, and rationalization are all characteristics of denial. Communication between the counselor...
1 Pages(250 words)Essay
sponsored ads
Save Your Time for More Important Things
Let us write or edit the assignment on your topic "The Visitation of the Gods" with a personal 20% discount.
GRAB THE BEST PAPER

Let us find you another Assignment on topic The Visitation of the Gods for FREE!