Comments (0)
Add to wishlistDelete from wishlist
Cite this document
Summary
La Celestina by Fernando de Rojas is a piece of Golden Age literature from Spain which duly reflects the society of those times. Perhaps most importantly, La Celestina is a window into how the lives of Spanish women were affected by the social restrictions of the times…
Download full paperFile format: .doc, available for editing
HIDE THIS PAPERGRAB THE BEST PAPER97.9% of users find it useful 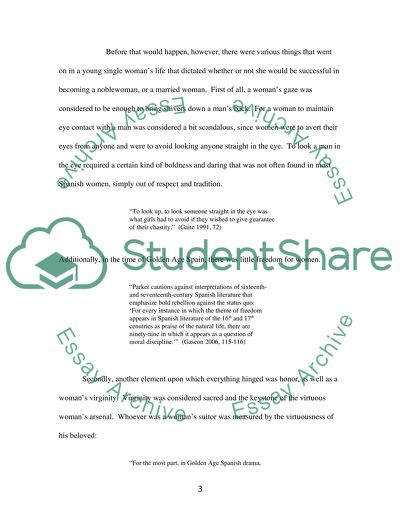 "Parker cautions against interpretations of sixteenth-
and seventeenth-century Spanish literature that
emphasize bold rebellion against the status quo:
'For every instance in which the theme of freedom
appears in Spanish literature of the 16th and 17th
cenutries as praise of the natural life, there are
ninety-nine in which it appears as a question of
moral discipline.'" (Gascon 2006, 115-116)
Secondly, another element upon which everything hinged was honor, as well as a woman's virginity. Virginity was considered sacred and the keystone of the virtuous woman's arsenal. Whoever was a woman's suitor was measured by the virtuousness of his beloved:
"For the most part, in Golden Age Spanish drama,
a woman's virtue or vice either enhances or
diminishes her husband's, father's, or brother's
reputation and is, therefore, not equal to the honor
of her male counterpart. Donald R. Larson states
that the "most unusual feature of the concept of
honor that prevailed in Spain in the seventeenth
century [is] namely, the dependence of the
honor of the male on the chastity of the female."
(DiPuccio 1998, 74)
Thirdly, young women were not allowed to go out of the house, for any reason, ...Download file to see next pagesRead More
Share:
Tags
Cite this document
(“Golden Age of Spain in Fernando de Rojass La Celestina Book Report/Review”, n.d.)
Golden Age of Spain in Fernando de Rojass La Celestina Book Report/Review. Retrieved from https://studentshare.org/miscellaneous/1530112-golden-age-of-spain-in-fernando-de-rojass-la-celestina

Why Do We Age

Senescence also results in increased incidence and severity of a wide variety of age-related diseases and conditions such as cancer, heart disease, stroke, arthritis, and diabetes and can be considered manifestations of ageing (Goldsmith, 2006).

Researchers have come up with many theories over the years to explain the changes that lead to ageing. However, most of these theories have practical difficulties to be tested such as the lack of adequate models make testing these theories a difficult, lengthy, and expensive process. The ageing process may originate from changes occurring simultaneously in different tissues due to intrinsic cellular mechanisms or changes in one tissue. Some authors like Mattson et al (2002) argu...

How the Golden Age of Spain is Reflected in La Celestina

...﻿ How the Golden Age of Spain is Reflected In Fernando de Rojas’s La CelestinaLa Celestina by Fernando de Rojas is a piece of Golden Age literature from Spain which duly reflects the society of those times. Perhaps most importantly, La Celestina is a window into how the lives of Spanish women were affected by the social restrictions of the times. The roles of women were very limited in Spain, and, certain roles—particularly the young unmarried woman, the married woman, and the chaperone or go-between—each had their own place within society back then. The average young woman in Spain was available for marriage at approximately age 14. Right after getting her menses, the young Spanish woman was considered...
12 Pages(3000 words)Book Report/Review

In particular, the impact of the digital revolution and the growth of numerous multimedia streams on cultural norms has challenged classical theory propounding the fu...

...Haro Wine Festival Spain Haro Wine Festival Spain Introduction Haro wine festival is one of the outstanding festivals in Spain and the rest of the world today. It is celebrated in Haro which is a town in the northwestern part of La Rioja province, Spain. The festival is held every year on June 29th. The main activities of this festival include a mass, wine drinking contests and competitions and a ‘Battle of Wine’ (Batalla de Vino), eating and bullfights (Zapaday, 2013) The history of this competition is dated back to the year 1710. It began when worshipers started celebrating after a mass by throwing and pouring wine at each other. Although this is the time when the competition was born, it did not gain much popularity until the 1945...
11 Pages(2750 words)Term Paper

Standardization involves the formulation and implementation of technical standards essential in maximizing and enhancing safety, repeatability, quality, compatibility, and interoperability (Shailaja 319). For decades, the need for a smooth flow of commerce and trade led to the standardization of goods and services.
The process of standardization entails the development, formulation, and relevance of established standards. It involves the incorporation of scientific research and the utilization of experiences to establish the required and precise technical requirements for a particular aspect of innovation and technology. The result of the study and experience is a “standard.” A standard is a document formulated by...
13 Pages(3250 words)Case Study

... s Keeping new-age ferrets as pets Introduction The domestication of the ferret can be traced back to ancient times of approximately 400BC. In the recent years, the idea of safety in keeping unconventional ferrets has emerged has attracted much public attention. Ferrets are small predators belonging to Carnivora order and Mustelid family with the likes of minks, otters, badgers, skunks as well as weasels. Their charming looks have made them a favourable option amongst those wanting to keep exotic animals at home. Moreover, the ferret has been useful tool for controlling pests, fur production and hunting rodents and rabbits. Some ferrets like the black footed ferret have been designated as being endangered by the IUCN. A study...
8 Pages(2000 words)Coursework

Legal Drinking Age in the U.S

...Legal Drinking Age in the U.S of the Affiliate Introduction The uncertainty of when underage people will drink again makes them drink more than those within the legal drinking age limit. Making 21 the legal drinking age does not in any way solve alcohol-related problems. In fact, it is one of the reasons as to why many alcohols related deaths are witnessed among the youth (Carpenter & Carlos, 2011). In 1984, President Ronald Reagan signed Federal Uniform Drinking Age Act of 1984 into law. It required all states to implement 21 as the legal drinking age for a period of not more than five years. States that were not willing to implement this legislation encountered a reduction in their federal highway funds. 50 states had adopted the 21...
6 Pages(1500 words)Case Study
sponsored ads
Save Your Time for More Important Things
Let us write or edit the book report/review on your topic "Golden Age of Spain in Fernando de Rojass La Celestina" with a personal 20% discount.
GRAB THE BEST PAPER

Let us find you another Book Report/Review on topic Golden Age of Spain in Fernando de Rojass La Celestina for FREE!