Comments (0)
Add to wishlistDelete from wishlist
Cite this document
Summary
It was during the Chinese invasion and domination. Philosophical beliefs of Chinese permeated Vietnamese culture. For humans to achieve perfection they ought to follow specific codes of behavior. Foremost Viet Nam…
Download full paperFile format: .doc, available for editing
HIDE THIS PAPERGRAB THE BEST PAPER92.3% of users find it useful 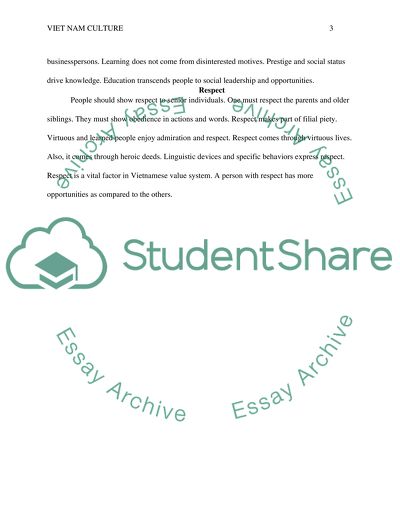 Viet Nam Culture Viet Nam Culture The Viet Nam culture had interruptions from Confucian values. It was during the Chinese invasion and domination. Philosophical beliefs of Chinese permeated Vietnamese culture. For humans to achieve perfection they ought to follow specific codes of behavior. Foremost Viet Nam cultures include family values, a good name, love to learn, and respect.
Family values
A family is a center of Vietnamese society. Each person strives to be the best. Misconduct brings blame to the family. Success brings fame. Fame is for the individual and the family. Children receive teachings for the welfare of their families and the society (Lücking, 2013).They need to appreciate the aspect of birth, education and rearing. Family love extends to the society. They desire to live and die in their societies. The people have an obligation of filial piety.
A good name
They desire to have a good name. A fragrant name is better than material possessions. The name comes with respect and admiration. People with riches but bad names are not respected. Bad names bring disgrace. Acquiring real names can be through heroic deeds and intellectual achievements. There are limited chances for heroic deeds. Thus, utilize the one at hand. Few people have exceptional qualities. The virtues triumphed include honesty, honor, modesty among others.
The love to learn
They uphold the love of learning and knowledge. Having this quality commands respect and admiration. Learned people enjoy prestige. Virtues and knowledge are complementary aspects of ideal men. Learning is valuable than materials and wealth. Uneducated but wealthy people do not hold a place in the society. Scholars rank the first then the farmers and the businesspersons. Learning does not come from disinterested motives. Prestige and social status drive knowledge. Education transcends people to social leadership and opportunities.
Respect
People should show respect to senior individuals. One must respect the parents and older siblings. They must show obedience in actions and words. Respect makes part of filial piety. Virtuous and learned people enjoy admiration and respect. Respect comes through virtuous lives. Also, it comes through heroic deeds. Linguistic devices and specific behaviors express respect. Respect is a vital factor in Vietnamese value system. A person with respect has more opportunities as compared to the others.
Reference
Lücking, M. (2013). “Between Individual Spirituality and Responsibility for Society.” European Judaism, 46(1), 103-114. doi:10.3167/ej.2013.46.01.14 Read More
Share:
Tags
Cite this document
(“What are the most important values in Viet Nam culture Essay”, n.d.)
What are the most important values in Viet Nam culture Essay. Retrieved from https://studentshare.org/english/1698097-what-are-the-most-important-values-in-viet-nam-culture

“What Are the Most Important Values in Viet Nam Culture Essay”, n.d. https://studentshare.org/english/1698097-what-are-the-most-important-values-in-viet-nam-culture.
Comments (0)
Click to create a comment or rate a document

... & Bowman, 2003). The American diplomats were so convinced of their supremacy of war power that they completely failed to look at the other side of the coin. As a result of poor planning and failed execution of the projected estimates, the American Culture received shocks and trauma that still haunt them even after so many years. Post the wars, thousands of families were affected, having lost husbands, sons, and daughters. People were left homeless and struggled to meets ends; the scars left on the society were so deep that not only the physical trauma was evident but the emotional stress was high enough for them to start doubting the bureaucrats’ intentions and integrity. The United States had a firm belief that communism anywhere would...
8 Pages(2000 words)Research Paper

...?Russia's Most Important Economic Sectors Introduction: Russia is the ninth biggest economy in the globe according to the nominal value. It is blessed with natural resources like coal, gas, oil, timber, and some precious metals. The well organized utilization of these resources had been a challenge for them after the collapse of Soviet Union. Russia has undergone many significant changes after collapse. In 2009, Russia was the leading exporter of natural gas, the second largest exporter of oil and the third leading country in exporting of steel and primary aluminum. The global commodity prices showed a high volatility on that time and that made the government think about the development other sectors; mainly they focused on the technology...
5 Pages(1250 words)Essay

...Hobbes and Political Revolution Thomas Hobbes remains one of the most important figures in the history of modern philosophy, and is best remembered for the employment of the theory of the social contract to explain the nature and origin of government as emanating from a ‘state of nature’. In his famous treatise, Leviathan, Hobbes claims that men are naturally selfish and suspicious of the actions of others; this leads them to commit aggressive preventive acts to secure their lives (1651/2005). Thus, men come together in the state of nature to form a social contract in order to escape a life that is “solitary, poor, nasty, brutish, and short” (Hobbes, 2005, p. 78). Each individual gives up his own power to the supreme sovereign...
4 Pages(1000 words)Essay

... (USA International Business Publications 121). Moreover, Vietnam consents to all efforts in support of its economic development and foreign investment (122). I. Entry to Globalization Despite moderation of trade barriers and enhanced diplomatic relations with more than a hundred territories worldwide, Vietnam remains true to the communist ideals. The Vietnamese Communist Party (VCP) still has control of election of government officials, from the highest to the most minor positions; and prohibits establishment of independent political, religious and labor organizations (USA International Business Publications 122). This is one practice that does not correspond with the concepts of globalization; yet seems to have worked well in Vietnam...
5 Pages(1250 words)Essay

...Research Paper Insert A Time to Break Silence This is a research paper about the Reliability of the of Martin Luther King Jr.’s Speech on the subject “A Time to Break Silence”, during the clergy meeting in Riverside Church in New York on April 4th, 1967. The paper is aimed at critically analyzing the speech and the corresponding issues to explicitly deduce the consequences of the involvement of the USA ijn Vietnam War. Martin Luther King Jr. who was a vicious orator with inspirational words that left most people pondering afterwards. The reliability of the speech could be vividly illustrates following the situations that were experienced in the Vietnam by then. Through inspiration he could not hold any longer the perception the war...
9 Pages(2250 words)Research Paper

... The Media’s Role in Vietnam America’s military involvement in Vietnam ended nearly 40 years ago but this dark period in history remains a benchmark by which we measure other conflicts, most recently Iraq and Afghanistan. The general consensus it that Vietnam was a debacle, an unnecessary war that cost more than 56,000 young people their lives and left many more injured both physically and mentally. Where did the consensus come from? Most people with this viewpoint weren’t there. The Pentagon seldom put a negative spin on the conflict and the protesters were in college, not fighting in the jungles of Southeast Asia. The media was allowed more unfiltered access to this war than any previous and was extremely instrumental in shaping opinion...
8 Pages(2000 words)Research Paper

This paper looks at how I manage my leadership practice as the chairman of the class discussion group as well as in singing group in the church, the barriers and strategies I use to overcome such barriers.
Last week when we came together as group members, fifteen of us, to discuss class assignments and other contentious class lessons, I found myself spearheading the discussion as I usually do, the act that saw me chosen as the group leader unanimously by all the other fourteen members. I helped in interpreting the meaning of the assignments thus making the topic understandable to everybody. I went ahead to create alignment in the objectives and strategies that we would use as we handle the discussion. As my usual practice, I...
2 Pages(500 words)Assignment

The American War in Viet Nam

Despite their active involvement, people from Australia were anxious about the country’s involvement in the war. It is noteworthy that various novels and other cultural texts focus on Australia’s involvement in the war and its consequences.
An example of a book that talks about Australia’s participation in the war is “The Things They Carried” by Tim O’Bien. This book contains short stories that talks about the country’s involvement while criticizing the complex political web that led to both America’s and Australia’s participation while featuring O’Brien and his fellow soldiers (O’Brien 18). The author has explained the roles of politics in the war while focusing on the soldiers who participated in the war. The initial chapter...
7 Pages(1750 words)Term Paper

The Most Important Thing

...﻿They say that friends are the family that we choose by ourselves and I totally agree with the statement. My friends are the most important for me because no matter what they are always there for me, so we share our ups and downs together and spend so much time with each other. When I was in an elementary school I didn’t have many friends, so I hadn’t realized what friendship was for me until I got to middle school. Even though I have just a few friends, they are the most important for me. My friends are a large part of my life because we spend both our school and free time together doing different things like sports and even playing in orchestra string ensemble. The most important thing for me in friendship is that we all share our...
1 Pages(250 words)Essay

...ORGANIZATIONAL CULTURE AND VALUES Many organizations are looking for people who have employees who have very strong personal affiliations and networking. Personal affiliations show that we are up-to-date and bring out the passion that we have towards our career. When we develop strong professional network, we get to expand our knowledge not only for our benefit but for the benefit of others (Kelly, 2010). As a nursing students, having strong personal affiliations will not only make us the best professionals but will also benefit the patients that we deal with. Nursing career requires individuals with wider knowledge and skills to help solve people’s medical problems. This therefore requires expanded knowledge base which we cannot get...
1 Pages(250 words)Essay
sponsored ads
Save Your Time for More Important Things
Let us write or edit the essay on your topic "What are the most important values in Viet Nam culture" with a personal 20% discount.
GRAB THE BEST PAPER

Let us find you another Essay on topic What are the most important values in Viet Nam culture for FREE!