On Eating Roadkill, the Most Ethical Meat - Essay Example

Comments (0)
Add to wishlistDelete from wishlist
Cite this document
Summary
An author of this essay intends to describe the concept discuss the idea animal meat-eating in the regard of human nature and ethics with a reference to the research entitled "On Eating Roadkill, the Most Ethical Meat" conducted by  Brendan Buhler…
Download full paperFile format: .doc, available for editing
HIDE THIS PAPERGRAB THE BEST PAPER93.1% of users find it useful 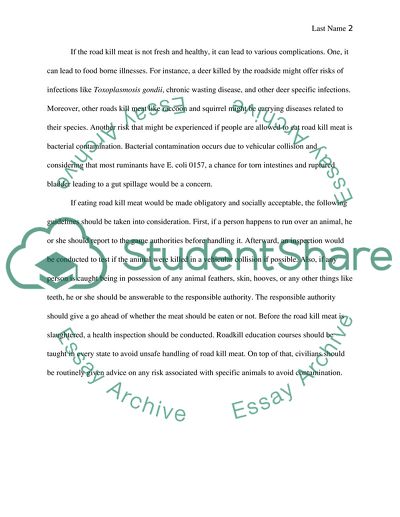 Extract of sample "On Eating Roadkill, the Most Ethical Meat"

﻿
An Analysis of “On Eating Roadkill, the most Ethical meat” by Brendan Buhler
Many people do not like eating road kill meat. This is because they think the meat is somehow contaminated, unethical, the animal that was killed was not meant for meat, has environmental implications, and also it is nasty and distasteful. Moreover, legal, practical, and culinary considerations from different states discourage people from cooking road kill (Buhler 1) However, eating road kill is as safe as eating any other meat from the game.
If the road kill meat was to be made more socially acceptable, many people would engage themselves in illegal activities of killing game animals and fake it as a road kill. Such activities would endanger the lives of game. Not all people would do this, but, unfortunately, some can kill game animals and sell the meat to various plants or butcheries. Such a situation can happen since it is hard to test whether an animal was hit by a car or met its death through any other way. Thus, making road kill meat more socially acceptable would not only cause unnecessary harm to animals, but also it might cause some people to drive in a more careless manner than before. Some might argue that people would not risk their lives by hitting an elk, deer or moose, but, unfortunately, not all people are good.
On the other hand, some researchers argue that factory-farmed meat has various effects on the environment. Therefore, road kill meat should be made permissible for as much as it is less harmful to the environment. Also, according to (Buhler 1) most road kill meat goes to waste since people do not consume it. By making it acceptable to eat road kill meat, the waste would be reduced, and less harm would be done to other animals. Game meat is also the healthiest among other meat and eating it would save lots of cash in many families.
If the road kill meat is not fresh and healthy, it can lead to various complications. One, it can lead to food borne illnesses. For instance, a deer killed by the roadside might offer risks of infections like Toxoplasmosis gondii, chronic wasting disease, and other deer specific infections. Moreover, other roads kill meat like raccoon and squirrel might be carrying diseases related to their species. Another risk that might be experienced if people are allowed to eat road kill meat is bacterial contamination. Bacterial contamination occurs due to vehicular collision and considering that most ruminants have E. coli 0157, a chance for torn intestines and ruptured bladder leading to a gut spillage would be a concern.
If eating road kill meat would be made obligatory and socially acceptable, the following guidelines should be taken into consideration. First, if a person happens to run over an animal, he or she should report to the game authorities before handling it. Afterward, an inspection would be conducted to test if the animal were killed in a vehicular collision if possible. Also, if any person is caught being in possession of any animal feathers, skin, hooves, or any other things like teeth, he or she should be answerable to the responsible authority. The responsible authority should give a go ahead of whether the meat should be eaten or not. Before the road kill meat is slaughtered, a health inspection should be conducted. Roadkill education courses should be taught in every state to avoid unsafe handling of road kill meat. On top of that, civilians should be routinely given advice on any risk associated with specific animals to avoid contamination.
Works Cited
Buhler, Brendan. “On Eating Roadkill, the Most Ethical Meat.” Modernfarmer.com, September 12, 2013. Web. 17 March 2015. < http://modernfarmer.com/2013/09/eating-roadkill/>. Read More
Share:
Tags
Cite this document
(“On Eating Roadkill, the Most Ethical Meat Essay Example | Topics and Well Written Essays - 500 words”, n.d.)
On Eating Roadkill, the Most Ethical Meat Essay Example | Topics and Well Written Essays - 500 words. Retrieved from https://studentshare.org/english/1683725-wr-121-final

CHECK THESE SAMPLES OF On Eating Roadkill, the Most Ethical Meat

... Puppies, Pigs and People: Eating Meat and Marginal Cases If one needed to torture puppies to enjoy a chocolate taste, would this be wrong? Obviously, the answer is yes, this is very wrong. However, most of those who would answer yes purchase factory farmed meat and consume it regularly, seeing no problem in this. The two scenarios may not be distinguishable morally, according to Alastair Norcross in his creative and provocative paper Puppies, Pigs and People: Eating Meat and Marginal Cases. He makes a case contending that the purchase and consumption of factory-farmed meat is comparable to the torturing of puppies in order to get gustatory pleasure, adding that meat-eaters who come to this realization may as well turn to vegetarians...
5 Pages(1250 words)Essay

The World's Most Ethical Companies

...? L’Oreal: One of the World’s Most Ethical Companies First M. al Affiliation Introduction L’Oreal is one company that is recognized as one of the 2013 World’s Most Ethical Companies. This list includes all companies that displayed exemplary efforts in demonstrating ethical business practices in their own respective industries (“World’s Most Ethical Companies,” 2013). L’Oreal is the biggest cosmetic and beauty enterprise in the world. It is known to provide high quality beauty products to various global consumers (L’Oreal, 2013a). The aim of this paper is to examine the ethical practices of L’Oreal towards its responsibility to consumers, the environment, and employees. It will predict the possible effects of these ethical practices...
5 Pages(1250 words)Essay

...Is Vegetarianism a Healthier and More Ethical Option to a Diet Containing Meat? Humans are omnivores and can consume both meat and plant foods. However, over time, humans have developed eating habits that have been influenced by many different factors (Palaniswamy, 2003) two of which are health and ethics. Vegetarianism can be defined as consuming a diet that is free of meat. Up to 2.5% of adults in the United States and 4% of adults in Canada consume vegetarian diets (Anonymous, 2003). While there are several degrees of variability within the term ‘vegetarian’, such as some people choosing to consume fish and other not consuming dairy products, it is the term that is normally used to include all non-meat eating people in the literature...
2 Pages(500 words)Essay

... of due: Meat eating, a necessary evil. To consume meat or not to consume meat; this statement has been a debatable topic for as long as I can remember. Vegetarians have for a long time claimed that meat eating is “murder” since animals are slaughtered in a huge number to feed the world population with meat. Animal rights activists are not necessarily against meat eating but cruelty towards animals. According to (Sims, 5), ethics can simply be defined as the systemic reflection on the moral aspect of life and it’s conflicts. The question if it is ethical or unethical to eat meat has become a personal matter. The most fundamental issue on dietary ethics is that, for most people residing in the developed world, meat eating...
5 Pages(1250 words)Essay

The Worlds Most Ethical Companies

...PepsiCo Ethical Review PepsiCo Ethical Review PepsiCo is one the major successful companies currently operating globally. In fact, PepsiCo is the second largest food and beverage producing and distributing company in the world after Coca Cola Company. It is the leading food and beverage producing company in North America (Pepsi, Inc., 2013). PepsiCo Company has a long history of the foundation. The company began in 1898 as Pepsi-Cola Company. Later in 1965, Pepsi-Cola Company merged with Frito-Lay and formed a new company known as PepsiCo Company. In 1998, the company acquired Tropicana to increase its production. It also merged with the Quaker Oats Company in 2001. Currently, the company is distributing and providing food and beverages...
5 Pages(1250 words)Essay

...Your full April 20, Consequences and Prevention of Road kill Fauna mortality is one of the main consequences of road kill. There are many species of animals which are smaller in size. Killing of animals of such small sized species will result in their extinction from the face of the earth. Road kill also results in loss of valuable animals, like pets or imported animals. Not only animals get injured and die, but also the vehicle owners face the risk of injury or death. Vehicle gets damaged if the driver takes such a turn to spare the animal that it may get struck with another vehicle. This results in economic losses of repair and cleanup of vehicles. Also, those places which are set reserved for tourism get bad scenic impact when...
1 Pages(250 words)Essay

Should We Stop Eating Meat

...Should We Stop Eating Meat? According to the World Health Organization, 30 percent of all cancers in the Western World and 20 percent of them indeveloping countries are due to dietary factors (Cancer Project, 2005). When researchers of cancer started to search for causes of cancer in the diet, the most significant finding that was observed was that those who did not consume meat were less likely to develop cancer. Infant, many studies in the Europe have proved that vegetarians are 40 percent less likely to suffer from cancer when compared to those who consumed non-vegetarian food. Studies conducted on Adventist population in which there were no confounding factors like life style habits and smoking and alcohol intake, have clearly shown...
7 Pages(1750 words)Term Paper

Why We Should Avoid Eating Meat From Factory Farms

... to the cheapening of corn, which is fed to the animals. This has driven down the price of meat, so that we are now eating much more meat the average American east 190 lbs a year, which works out to a half pound every day. This over-consumption of meat that is made possible to factory farming practices is harmful to the environment because, according to Pollan, the animal waste is no longer a source of fertilizer, but, rather, simply a source of pollution. The reason why this is is because removing animals from the land, and putting them into a feedlot means that the animal manure is no longer being used to fertilize soil, but is being wasted. This, in turn, means that land is being fertilized with fossil fuels instead of manure (Pollan...
7 Pages(1750 words)Term Paper

... meat is a disgusting act that is worthy of all condemnation. Dogs are man’s best friend and so they are good by themselves and should not be butchered and consumed as food regardless of the numerous benefits that can be obtained from their meat. Moreover, the idea of eating dog meat has political, social and psychological sides to the issue that all point out one thing: it is bad. Whatever happens, the most important thing that one should take into consideration is that this society should stop doing whatever it does not want its children to follow someday. Top of Form Bottom of Form Works Cited Ann, Yong-Geun. “No. It is a part of Korea’s culture." Korea Herald, 8 Aug. 2011. Web. 5 May 2014.
sponsored ads
Save Your Time for More Important Things
Let us write or edit the essay on your topic "On Eating Roadkill, the Most Ethical Meat" with a personal 20% discount.
GRAB THE BEST PAPER

Let us find you another Essay on topic On Eating Roadkill, the Most Ethical Meat for FREE!