Comments (0)
Add to wishlist Delete from wishlist
Cite this document
Summary
Boss (2012) defines critical thinking as a person’s ability to engage in clear and rational thoughts characterized by the ability to engage in reflective and independent arrangement of ideas…
Download full paper File format: .doc, available for editing
HIDE THIS PAPERGRAB THE BEST PAPER92.3% of users find it useful 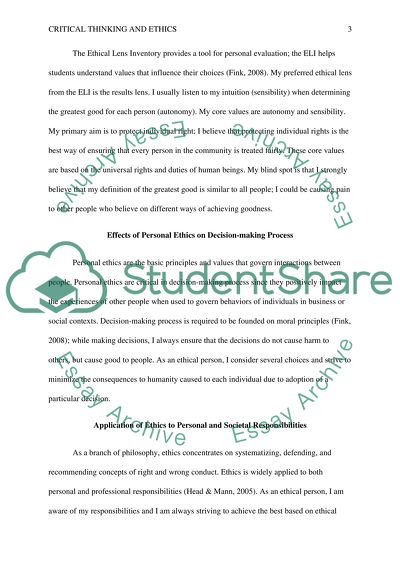 Critical Thinking and Ethics Critical Thinking and Ethics Definition of Critical Thinking Critical thinking and ethics are inseparable concepts in the contemporary world. Boss (2012) defines critical thinking as a person’s ability to engage in clear and rational thoughts characterized by the ability to engage in reflective and independent arrangement of ideas. Clarity and rationality of ideas based on reason constitute the primary characterizations of critical thinkers. Critical thinkers have several skills that enable them to comprehend the logical connections between ideas, reflect on the justification of own beliefs and values, detect inconsistencies and common mistakes in reasoning, and engage in systematic solving of problems.
Steps in Critical Thinking Process
According to Head and Mann (2005), critical thinking process involves:
1. Recognizing the existence of problems
2. Understanding the necessity of prioritizing and order of precedence in solving problems
3. Gathering and marshalling relevant information
4. Recognizing unstated assumptions
5. Interpreting data to appraise evidence and evaluate arguments
6. Drawing warranted conclusions and generalizations based on logic
The Ethical Lens Inventory
The Ethical Lens Inventory provides a tool for personal evaluation; the ELI helps students understand values that influence their choices (Fink, 2008). My preferred ethical lens from the ELI is the results lens. I usually listen to my intuition (sensibility) when determining the greatest good for each person (autonomy). My core values are autonomy and sensibility. My primary aim is to protect individual right; I believe that protecting individual rights is the best way of ensuring that every person in the community is treated fairly. These core values are based on the universal rights and duties of human beings. My blind spot is that I strongly believe that my definition of the greatest good is similar to all people; I could be causing pain to other people who believe on different ways of achieving goodness.
Effects of Personal Ethics on Decision-making Process
Personal ethics are the basic principles and values that govern interactions between people. Personal ethics are critical in decision-making process since they positively impact the experiences of other people when used to govern behaviors of individuals in business or social contexts. Decision-making process is required to be founded on moral principles (Fink, 2008); while making decisions, I always ensure that the decisions do not cause harm to others, but cause good to people. As an ethical person, I consider several choices and strive to minimize the consequences to humanity caused to each individual due to adoption of a particular decision.
Application of Ethics to Personal and Societal Responsibilities
As a branch of philosophy, ethics concentrates on systematizing, defending, and recommending concepts of right and wrong conduct. Ethics is widely applied to both personal and professional responsibilities (Head & Mann, 2005). As an ethical person, I am aware of my responsibilities and I am always striving to achieve the best based on ethical guidelines. Responsibility is one of the values of morality that every ethical human being need to institute into his or her daily practices. Personal responsibilities are those obligations that I am required to perform at will without further command. Professional responsibilities, on the other hand, involve providing goods and services to people; hence, there are several strict guidelines instituted by all professionals to minimize harm to service users. Ethical people are aware of the right and wrong, and the associated consequences. Therefore, these people are always striving to avoid these consequences by ensuring effective performance of both personal and professional responsibilities.
References
Boss, J. A. (2012). Think: Critical thinking and logic skills for everyday life. New York: McGraw-Hill.
Fink, C. K. (2008). Moral reasons: An introduction to ethics and critical thinking. Lanham, Md: University Press of America.
Head, M., & Mann, S. (2005). Law in perspective: Ethics, society and critical thinking. Sydney, NSW: UNSW Press. Read More
Share:
Tags
Cite this document
(“Critical thinking and ethics Essay Example | Topics and Well Written Essays - 500 words”, n.d.)
Retrieved from https://studentshare.org/english/1678637-critical-thinking-and-ethics

CHECK THESE SAMPLES OF Critical thinking and ethics

...? Critical Thinking: Ethics and Ethical Behavior Police is a term used to describe a body of persons who are empowered by the law of the land they are operating in to enforce the law, maintain law and order and protect property. People who are recognized as police officers are required to be citizens of the particular country they are serving. Police forces are supposed to enforce the law of the land as the primary role of the police. Police forces serve various other purposes other than maintaining law and order in society, and they are referred by various terms like police service and/or sheriffs. The nature of police puts the police in conflict with the citizenry they are policing which puts a lot of pressure on the police officers...
7 Pages (1750 words) Essay

...﻿Critical Thinking Introduction Nursing care in cases of Multiple Sclerosis, Guillain-Barré Syndrome, Spinal Cord Trauma, Stroke, or Alzheimer’s has one thing in common – palliative care. Medicines are necessary but it is difficult to pinpoint the medical regimen given the complexity of the above diseases and the doses needed to be administered. Thus, palliative and psychological care assumes gigantic proportions in the healing process. The will of the patient also plays an important role in living with the disease and its healing (Deverell, Lil; 2002). Cognitive We live in an information age when the line of treatment and medical information is available online. Patients have access to medical advice and similar cases online and can...
5 Pages (1250 words) Essay

.... (The manager and the negotiator) Conclusion The writings of "Critical Thinking and Ethics; From Theory to Application" give an insight on the ethical aspects of psychology. These writings highlight the importance of self evaluation and analysis of personal behavior with respect to the social circumstances making the behavior socially responsible. Not only that, they teach the practicality and application of the ethic theories too by quoting live examples from real life situations. This demonstrates effective ways of understanding the societal impact of our own actions and the morality linked with those actions. By presentations of striking...
3 Pages (750 words) Essay

... prefers to keep his life simple and mind his own business. He just wrestles with his conscience every night for keeping quiet about negative things. He drinks beer to assuage his conscience. d.) The fourth action is that Danny resigns from the company since he cannot do anything about the problem. He then looks for another job. He tries to choose another company that is well-known for its high ethical standards in the workplace. 2.) Eliminate any of the options that clearly violate anyone's negative rights. An example of a negative right is the right to be left alone. Using this principle, one can then eliminate Action b. 3 Determine whether any remaining options represent positive rights that might imply obligations to others...
11 Pages (2750 words) Case Study

Research and Critical Thinking Study Questions: (The Ethics of Emergencies)

...Critical Thinking Study Question Rand in her essay argues that human being has values which are hierarchical and must act on the top most value, which affects an individual personally. However, those that act in disregard to their values do so for lack of self esteem (Rosenstand, 2013). The value of sacrifice is as a result of non recognition of one’s self esteem and for those that he loves. Moreover, Rand says that all people should practice objectivism and thus helping other amount to disrespecting them. According to Rand, altruism makes people give up their values while helping other people. Objectivism requires people to be self-centered so as to maximize their benefit to people whom they are attached to such as the family members...
2 Pages (500 words) Assignment

...Critical thinking and ethics Ethical reasoning is a branch of ethics, which entails systematizing, protecting,and recommending concepts of right and wrong demeanor mostly relating to disputes of moral diversity. In the other hand, critical thinking is the academically disciplined process of vigorously and competently conceptualizing, applying, analyzing, synthesizing, and evaluating information gathered from surveillance, understanding, reflection, way of thinking, and a statement as a guide to principle and action. Hence, critical thinking and ethical reasoning directly correlate to each other. This is because the outlook is essential to critical reasoning does not occur or may be poor quality. On the other hand, ethical reasoning equips...
1 Pages (250 words) Essay

...Connection between Critical Thinking and Ethics Critical thinking illustrates cognition application towards separation of highly likely, when set of possibilities are presented. Ethics, on the other hand, illustrates perception of right and wrong in relevant situations. Ethical considerations experience several areas of global overlap; but ethical solutions or practices to all problems are rarely universal (Solomon, 2004). This explains considerations link of critical thinking with ethics. The major relationship between ethics and critical thinking illustrates no strict rules concerning ethics applications during various situations. This is because what can be seen as ethical in a particular situation may be viewed as unethical...
1 Pages (250 words) Essay

...Relationships Between Critical Thinking & Ethics Relationships between Critical Thinking & Ethics Ruggiero defines critical thinking as the cognitive process of making rational judgment regarding beliefs and actions in response to particular circumstances or observations. Ethics is concerned with the set of rules, which determine and guide the conduct of a specific group or general human population. Critical thinking rules and principals are applicable to ethical reasoning. They are applicable because critical thinking enables individuals to determine whether a persons deeds are right or wrong concerning whether the activity is within certain values in the society. These values are such as justice, wisdom, care, and compassion...
1 Pages (250 words) Essay

The negative publicity can affect the firms' performance in the market and Gabe’s tenure might also cause dissension within the organization itself, especially among the shareholders who are intent on making a profit. To decide on this matter, Badaracco impresses on the decision maker to judge responsibly. Ultimately, he proposes the evaluation of the interests of all the stakeholders involved. The idea is to determine the benefit so that the decision will achieve "the most good and the least harm" (p.5).
The entire list that should be evaluated to determine the net benefit can be constituted by the entire organization. This variable is representative of the shareholders, the employees and Garry, himself, as the owner. Su...
13 Pages (3250 words) Assignment

...Critical Thinking and Ethics Number) November 19, (Faculty) Critical Thinking and Ethics Critical thinking can be perceived as being able to clearly think about what to do or believe in based on your own objective analysis and evaluation of matters at hand. It therefore involves self-monitoring, self-discipline, self-direction and creativeness (Elder 2007). Ethics on the other hand can be termed as set standards restricting members of any given profession. It is therefore arguable that critical thinking lies within an individual while ethics or ethical reasoning is bound to external factors. This study purposes to relate the two elements. The principles and rules of critical thinking are not applicable to ethical reasoning. Besides...
1 Pages (250 words) Essay
sponsored ads
Save Your Time for More Important Things
Let us write or edit the essay on your topic "Critical thinking and ethics" with a personal 20% discount.
GRAB THE BEST PAPER

Let us find you another Essay on topic Critical thinking and ethics for FREE!