Comments (0)
Add to wishlistDelete from wishlist
Cite this document
Summary
The consumption of social media is rampant in the youth. In an argument by Sonia (2008) the increased use of social media has equal measures of cons and pros on the…
Download full paperFile format: .doc, available for editing
HIDE THIS PAPERGRAB THE BEST PAPER97.4% of users find it useful 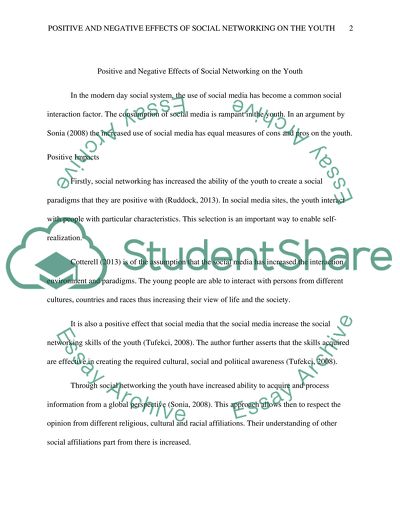 Positive and Negative Effects of Social Networking on the Youth Affiliation Positive and Negative Effects of Social Networking on the Youth
In the modern day social system, the use of social media has become a common social interaction factor. The consumption of social media is rampant in the youth. In an argument by Sonia (2008) the increased use of social media has equal measures of cons and pros on the youth.
Positive Impacts
Firstly, social networking has increased the ability of the youth to create a social paradigms that they are positive with (Ruddock, 2013). In social media sites, the youth interact with people with particular characteristics. This selection is an important way to enable self-realization.
Cotterell (2013) is of the assumption that the social media has increased the interaction environment and paradigms. The young people are able to interact with persons from different cultures, countries and races thus increasing their view of life and the society.
It is also a positive effect that social media that the social media increase the social networking skills of the youth (Tufekci, 2008). The author further asserts that the skills acquired are effective in creating the required cultural, social and political awareness (Tufekci, 2008).
Through social networking the youth have increased ability to acquire and process information from a global perspective (Sonia, 2008). This approach allows then to respect the opinion from different religious, cultural and racial affiliations. Their understanding of other social affiliations part from there is increased.
In regards to educational purposes, social networking create learning platforms. Specifically, social educational platforms are adversely provided by social networks. The results can be reflected in the educational experiences of the youth (Ruddock, 2013).
Negative Impacts
The greatest negative impact of social networking is the significant strength of peer pressure created (Larson, Eccles & Mahoney, 2006). The young people are recipients and creators of massive unsupervised and uncontrolled information. The information provided is significant in creating perception that may be negative in the young minds (Sonia, 2008).
Wang, Tchernev & Solloway (2012) point out that social media has minimized the effectiveness of physical social interaction. The modern day youth rarely take part in the creation of relationships in the offline world. This creates a social gap in the age group.
Youths in social networks often provide personal information in online sites. The information may be used for negative purposes. In an argument by Ruddock (2013) the access private information is an extreme negative aspect of social networks.
With the increased use of social networks, the youths are exposed to personal or group abuse. Numerous cases of cyber bullying have been reported in common social interaction cites such as Facebook and Twitter.
The unethical creation and access to graphic media has been influenced by increased social networking by the youth. It has become easy and direct to access graphic information and media on social networks (Cotterell, 2013). In addition, the youth are creators and distributors of this form of information.
Conclusion
From the argument presented, it is an accurate assertion that the modern day youth has an increased preference to social networking. Regardless of the assumption that the trend has increased the learning ability of the youth, numerous negative effects of the trend can be cited and proved. Conclusively, social networking among the youth has negative and positive effects in equal measure.
References
Cotterell, J. 2013. Social Networks in Youth and Adolescents. London: Routledge.
Jan, K. & Kristopher H. 2011. "Social media? Get serious! Understanding the functional building blocks of social media". Business Horizons, 54: 241–251.
Larson, R., Eccles, S. and Mahoney, L. 2006 Organized Activities as Contexts of Development: Extracurricular Activities. London: Routledge.
Ruddock, A. 2013. Youth and Media. London: SAGE.
Sonia, L. 2008. Taking risky opportunities in youthful content creation: teenagers use of social networking sites for intimacy, privacy and self-expression. London: SAGE .
Tufekci, Z. 2008. "Grooming, Gossip, Facebook and Myspace." Information, Communication & Society, 11.4 (2008): 544- 64.
Wang, Z., Tchernev, M., & Solloway, T. 2012. A dynamic longitudinal examination of social media use, needs, and gratifications among college students. Computers in Human Behaviour, 28(5): 1829-1839. Read More
Share:
Tags
Cite this document
(“A discussion of the positve and negative impacts of social networking Essay”, n.d.)
Retrieved from https://studentshare.org/english/1674547-a-discussion-of-the-positve-and-negative-impacts-of-social-networking-on-todays-youth

(A Discussion of the Positve and Negative Impacts of Social Networking Essay)
https://studentshare.org/english/1674547-a-discussion-of-the-positve-and-negative-impacts-of-social-networking-on-todays-youth.

“A Discussion of the Positve and Negative Impacts of Social Networking Essay”, n.d. https://studentshare.org/english/1674547-a-discussion-of-the-positve-and-negative-impacts-of-social-networking-on-todays-youth.
Comments (0)
Click to create a comment or rate a document

...Negative Impacts of Technology Technology has made human life easy, fast and worth living. This is because of its integration in numerous parts of human daily lives. People today have, therefore, become more dependent on technology compared to centuries ago. For some, it is not possible to imagine how life would be without technology as part of it. For most complex things that were traditionally perceived as impossible, technology has provided safe, secure and fast solutions that contribute to higher performance. However, the negative elements of technology have long being ignored yet they are associated with remarkably immense negative outcomes. Three...
24 Pages(6000 words)Research Paper

...orientation about them. Friend-based websites can be viewed as virtual meeting that allows individuals to chill out and meet friends. Discussions can be held on topics of common interest, information on various topics can be exchanged and files or pictures exchanged between the groups of friends connected through the social networking website. The social networking websites act as platforms to meet and remain in contact with long lost friends or schoolmates irrespective of the distance between them. For some others it acts as a bridge for meeting family members of finding a suitable partner for life. Among students it acts as a platform for exchange of...
2 Pages(500 words)Essay

...to a whole range of challenges cannot be denied. This paper discusses the potential negative effects of globalization. The negative impacts of globalization Increase in unemployment One of the most frequently debated consequences of globalization is outsourcing. As more and more people from the developing countries migrated to the advanced economies, employers in the host countries started to take benefit of it by offering jobs to migrants instead of the local citizens. This saved them the cost of business as the migrants agreed to work upon salaries significantly lower than what a local candidate with the same level of competencies and abilities would ask for. Migrants...
8 Pages(2000 words)Assignment

...and cheaper, it has led to increased social disorders, impacted personal privacy, work productivity and led to increased cybercrimes as well as destroyed relationships. Social networking sites have led to social disorders and other related diseases such as depression, obesity and many others. It has also destroyed relationships and made life miserable to users. However, despites the negative impacts of social networking sites, it has advanced communication and made it easier and cheaper. References Biswajit D. & Jyoti S. S. (July, 2011)....
3 Pages(750 words)Essay

...The study aims at critically examines the role of social networking and challenges to societal members, particularly the youth, and the negative impacts that they pose to the people today. The study will critically review the correlation between social networking youth challenges such as crime, drug abuse and dismal performance among schools (Fuchs, 2012). Following the objectives of the study, it will tend to be more qualitative than quantitative. The study will also look into the implemented measures to alleviate such challenges and their suitability. Research Questions The study will...
2 Pages(500 words)Research Proposal

...﻿The Negative Effect of Social Media on YouthToday I shall talk about the negative effects of social media on youth. Ever since its evolution over the last two decades, social media has taken the world by storm. Every few weeks, a new form of platform or gadget is introduced to us where apart from the main features of the gadget, one of the key roles played by them is thriving social media. Be it a laptop, SMART TV, or SMART phone, gadgets are valued for the extent to which they can provide the users with access to social media. While we all have, in one way or another,...
2 Pages(500 words)PowerPoint Presentation

... Negative Impact Of Tourism On Language Religion And Customs And Tradition Introduction Tourism is unarguably one of the most dynamic and developing sectors earning a myriad of countries across the globe millions of dollars in different forms. A number of countries have benefited from infrastructural development, currency inflows, educational and management skills associated with tourism. Citizens from these countries have as well gained from various employment opportunities resulting from economic development of the regions visited by tourists. Some of the highly developed Western nations such as Switzerland, Italy, and Austria have attributed most of its economic and social welfare development to tourism. (Smith, 2006) Currently... , it is...
7 Pages(1750 words)Essay

...like approval on the collection of primary data from architects and critics on their opinion relation to the issues of ethics and social responsibility in architecture and the strategies that can be implemented in architecture schools to augment adherence to ethics and social responsibility by graduate architects. References Chan, J. K. H. (2013). Teaching ethics in architecture: contexts, issues and strategies. Journal of the NUS Teaching Academy, 3(3), 85-99. Gray, M. (March 4, 2014). The Problem With Architecture Today (and the Solution). The Huffington Post. Retrieved from...
2 Pages(500 words)Essay
sponsored ads
Save Your Time for More Important Things
Let us write or edit the essay on your topic "A discussion of the positve and negative impacts of social networking on today's youth" with a personal 20% discount.
GRAB THE BEST PAPER

Let us find you another Essay on topic A discussion of the positve and negative impacts of social networking on today's youth for FREE!