Comments (0)
Add to wishlist Delete from wishlist
Cite this document
Summary
They do not use non-food animal products like wool and leather. These people have constantly put meat eaters in fear withtheir threats and attention seeking cries of…
Download full paper File format: .doc, available for editing
HIDE THIS PAPERGRAB THE BEST PAPER96.8% of users find it useful 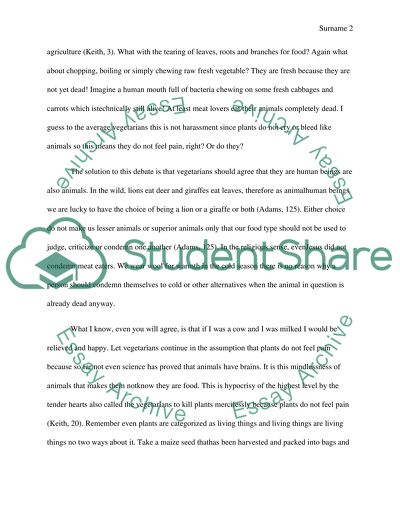 Modest Proposal: Vegetarian People People who do not eat meat and animal byproducts like eggs, milk or any dairy products like ghee and cheese. They do not use non-food animal products like wool and leather. These people have constantly put meat eaters in fear withtheir threats and attention seeking cries of animal cruelty, heartlessness and animal harassment (Adams, 123). Is it true that what an individual eat defines their personality? Ever wondered why some people try being vegetarians for a while, then cross over and never return to being vegetarians: because it is hard (Keith, 1).
Vegetarians should stop being troubled by animals, people eat since even in the wild, they would not survive as long. As a matter of fact, humans keep these animals safe, provide shelter, food and even treat them. Just think of which heartless person would care for your every need and just receive a little bit of something as a thank you and only consume you after your life span is over.
During harvest time farmers cut down maize stalks, pluck beans and prune wheat, dig and yank cassava, potatoes and carrots. They are processed and put in bags and sold to vegetarians who they are not merciless and are not harassing the plants not to mention destruction to earth by agriculture (Keith, 3). What with the tearing of leaves, roots and branches for food? Again what about chopping, boiling or simply chewing raw fresh vegetable? They are fresh because they are not yet dead! Imagine a human mouth full of bacteria chewing on some fresh cabbages and carrots which istechnically still alive! At least meat lovers eat their animals completely dead. I guess to the average vegetarians this is not harassment since plants do not cry or bleed like animals so this means they do not feel pain, right? Or do they?
The solution to this debate is that vegetarians should agree that they are human beings are also animals. In the wild, lions eat deer and giraffes eat leaves, therefore as animalhuman beings we are lucky to have the choice of being a lion or a giraffe or both (Adams, 125). Either choice do not make us lesser animals or superior animals only that our food type should not be used to judge, criticize or condemn one another (Adams, 125). In the religious sense, evenJesus did not condemn meat eaters. We wear wool for warmth in the cold season there is no reason why a person should condemn themselves to cold or other alternatives when the animal in question is already dead anyway.
What I know, even you will agree, is that if I was a cow and I was milked I would be relieved and happy. Let vegetarians continue in the assumption that plants do not feel pain because so far not even science has proved that animals have brains. It is this mindlessness of animals that makes them notknow they are food. This is hypocrisy of the highest level by the tender hearts also called the vegetarians to kill plants mercilessly because plants do not feel pain (Keith, 20). Remember even plants are categorized as living things and living things are living things no two ways about it. Take a maize seed thathas been harvested and packed into bags and drop it into soil after two weeks it will grow meaning plants are never dead when vegetarians forcefully kill them with the bacteria and teeth in their mouths.
A movement should be established by meat eaters. It will hard to achieve the goals but just as the martyrs preserved and faced persecution to make Christianity alive so shall the meat eater’s campaign succeed finally. I know I will be on the fore front and so shall many. Even some previous vegetarians who crossed over to the ‘bad’ side could join.
Works Cited
Adams, Carol J. Living Among Meat Eaters: The Vegetarians Survival Handbook. Brooklyn,
NY: Lantern Books, 2009. Print.
Keith, Lierre. The Vegetarian Myth: Food, Justice, and Sustainability. , 2009. Internet resource. Read More
Share:
Tags
Cite this document
(“Modest Proposal: vegetarian people Essay Example | Topics and Well Written Essays - 500 words”, n.d.)
Retrieved from https://studentshare.org/english/1666758-modest-proposal-vegetarian-people

... A Modest Proposal Conditions in Ireland are poor and need urgent addressing. The number of beggars on the streets increases with each year making the town filled with people in dire need of assistance. However, this situation is not being made easier by the fact that, people are still giving birth to an equally large amount of children. The children grow up and end up being thieves, soldiers, or sometimes, sell themselves to other regions to do odd jobs. The children in this region are a burden to their parents, and their country as the deplorable condition in the region continues to tear away at the people (Swift 45). There needs to be an intervention that raises awareness on the current situation the region is facing. This might assist...
3 Pages (750 words) Essay

... A Modest Proposal Jonathan Swift's well-known satirical writing, A Modest Proposal, has long been acknowledged as the inauguration of a long practice of writing for the intention of mocking an establishment (Smith 135). Jonathan treats the overwhelming state of affairs in his motherland, Ireland, with sarcasm and condescension, expressing the harsh political and economic conditions of the Emerald Isle in the 18th century-problems which was caused by the British Empire’s mercantilist domineering. Jonathan does well to condemn the ruling class of his motherland by suggesting an even more unethical and shocking means of dealing with the country's affairs. Through his word handling and fine use of sarcasm, Jonathan’s tactful writing is a well...
3 Pages (750 words) Essay

...﻿Should People become Vegetarian? Introduction Vegetarianism is one of the controversial issues that have sparked public interest. Proponents argue that vegetarianism is imperative to human beings because it helps in protecting the environment and reducing ailments such as obesity and heart attacks. Other proponents allege that consuming meat causes deforestation and leads to pollution, claiming that killing of animals is unethical and cruel. On the other hand, critics contend that consumption of meat is humane and healthy and the production of vegetables could equally cause similar environmental problems caused by the production of meat. They also argue that non-vegetarianism is a step backward and human beings have eaten and enjoyed meat...
6 Pages (1500 words) Assignment

...A Modest Proposal Introduction Jonathan Swift (1667-1745) lived in an era when the Enlightenment (1600-1750) was in its full swing. It was a time when the value of religion had decreased and people had attached more value to the truth unveiled through scientific exploration and human reasoning. When Jonathan Swift started writing, the revolutionary theories of Nicolas Copernicus, Galileo Galilei had already paved way for the later scientific inquiry carried out by theorists like Francis Bacon, Rene Descartes and Isaac Newton. It was a time when under the influence of deductive reasoning Descartes had proclaimed that God was the “mathematical order of nature” (Fiero, 2006, p.304). The Enlightenment and its theorists, however, could...
3 Pages (750 words) Essay

...MODEST War is a problem that has plagued society for years, and as war has become more and more technologically advanced, more and more young men and women are being asked to give up their lives for their country. In the US, recently, the last few wars have been particularly unpopular. In Vietnam, many young men and women were sent by presidents Kennedy, Johnson, and Nixon, to lose their lives, in the name of stopping a political ideology. In the Iraq War, even though Obama has recently deescalated this unpopular venture, under Bush, thousands of young men and women lost their lives not for political ideology, but for no clear reason at all. And even under Obama, the US is still involved in a deadly conflict in Afghanistan...
2 Pages (500 words) Essay

...﻿ Swift’s “A Modest Proposal” “A Modest Proposal” opens with what appears to be compassion and concern over the situation of those in society who are in poverty and struggling to keep their families fed. Swift describes how these individuals have become a burden to society and also the financial difficulties that it can impose on members of society. The tone of the essay is that of sympathy, kindness and mercy. In some ways, it seems as though the author is attempting to persuade others to help the poor or provide them with financial assistance. The point where it became very apparent that the author was going to change is tone was when Swift began describing the fatness of children after being fed by their mothers. The author...
1 Pages (250 words) Essay

The Modest Proposal Swift has managed to describe the suffering and challenges that the mothers are facing in a very simpleway that is understandable to anyone. It is important to notice that children and women always suffer the most and this is what Swift has targeted to bring out the theme of hunger and suffering.
2. Swift did not just present a good case but also justified why his case is valid. He insists that mothers are begging for a living for their children in order to avoid the high cases of abortions. Moreover, he calculates the number of poor children raised in Ireland and he suggests that the 170,000 children born of poor children end up picking theft as their way of survival.
3. The tone is satirical. Swift us...
1 Pages (250 words) Assignment

Pretty much the same number of keep on calling themselves, say, Catholics, regardless of an admitted wariness toward its practices, so Smokers remain Smokers in light of the fact that theyve been Smokers for quite a long time, and they know no other way. On the other hand, the fundamental of this paper is to create how smoking is cool in an ironical viewpoint.
Smoking is about the figment of flexibility. It is enjoyable to smoke decisively on the grounds that should not smoke, and in the event that you had any sense at all you wouldnt smoke. Much the same as different religions, confidence in the emancipator forces of Smoking must occur among the youthful; past the age of 21, a great many people are not looking for another rel...
4 Pages (1000 words) Essay
sponsored ads
Save Your Time for More Important Things
Let us write or edit the essay on your topic "Modest Proposal: vegetarian people" with a personal 20% discount.
GRAB THE BEST PAPER

Let us find you another Essay on topic Modest Proposal: vegetarian people for FREE!