Comments (0)
Add to wishlist Delete from wishlist
Cite this document
Summary
He is an evangelical missionary operating in the Congo over a long span of time. He is depicted as being coldhearted. He is unmoved by the escalating violence, and ends up losing one daughter for his unrelenting, unrealistic approach to…
Download full paper File format: .doc, available for editing
HIDE THIS PAPERGRAB THE BEST PAPER97.4% of users find it useful 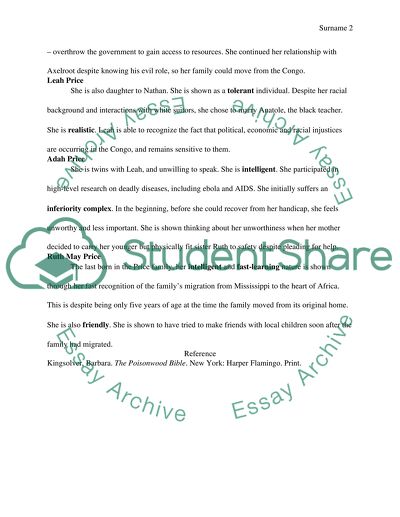 A Summary of Six Main Characters in the Poisonwood Bible Nathan Price He is the central character in the novel. He is an evangelical missionary operating in the Congo over a long span of time. He is depicted as being coldhearted. He is unmoved by the escalating violence, and ends up losing one daughter for his unrelenting, unrealistic approach to his mission in a manner that shows the least regard for the family’s plight. Further, he appears to be judgmental. He is quick to judge others, and often declares their opinions inferior. He thinks the natives in his new land are crude in their ways of living. He is a selfish character oblivious of the needs and plights of other people, but just determined to pursue his personal course. He refused to let his family migrate from Kilanga at a time when whites were facing persecutions, putting the family through fear of persecution and psychological torture.
Orleanna Price
She is wife to Nathan. She is protective. Her detailed actions include ensuring that the family is safe from harm, both from illnesses or hostilities. By being protective, she appears to put the interests of her family before her own. She is also realistic. Despite not having accomplished their mission in the Congo, she assessed the situation rightly and recognized the danger that their being there posed. She responded by requesting her husband to return with the family to Mississippi, a request that he severally denied. She is also cognizant of the misgivings of her husband’s mission and the missions of other whites in the Congo.
Rachael Price
She is the eldest daughter of Nathan and Orleanna. She is truculent by character. She confronted the request to marry Tata Ndu the chief by throwing a fit. She is also depicted as being selfish. She is involved in a relationship with a mercenary whose intentions are clear to her – overthrow the government to gain access to resources. She continued her relationship with Axelroot despite knowing his evil role, so her family could move from the Congo.
Leah Price
She is also daughter to Nathan. She is shown as a tolerant individual. Despite her racial background and interactions with white suitors, she chose to marry Anatole, the black teacher. She is realistic. Leah is able to recognize the fact that political, economic and racial injustices are occurring in the Congo, and remains sensitive to them.
Adah Price
She is twins with Leah, and unwilling to speak. She is intelligent. She participated in high-level research on deadly diseases, including ebola and AIDS. She initially suffers an inferiority complex. In the beginning, before she could recover from her handicap, she feels unworthy and less important. She is shown thinking about her unworthiness when her mother decided to carry her younger but physically fit sister Ruth to safety despite pleading for help.
Ruth May Price
The last born in the Price family, her intelligent and fast-learning nature is shown through her fast recognition of the family’s migration from Mississippi to the heart of Africa. This is despite being only five years of age at the time the family moved from its original home. She is also friendly. She is shown to have tried to make friends with local children soon after the family had migrated.
Reference
Kingsolver, Barbara. The Poisonwood Bible. New York: Harper Flamingo. Print. Read More
Share:
Tags
Cite this document
(“Summary of the six main charcters in the poisonwood bible Essay”, n.d.)
Summary of the six main charcters in the poisonwood bible Essay. Retrieved from https://studentshare.org/english/1663508-summary-of-the-six-main-charcters-in-the-poisonwood-bible

“Summary of the Six Main Charcters in the Poisonwood Bible Essay”, n.d. https://studentshare.org/english/1663508-summary-of-the-six-main-charcters-in-the-poisonwood-bible.
Comments (0)
Click to create a comment or rate a document

The Poisonwood Bible and The Heart of Darkness

...﻿A Comparison of The Poisonwood Bible and The Heart of Darkness The similarity between Barbara Kingslover’s book, ‘Poisonwood Bible’ and Conrad’s book, ‘The Heart of Darkness’, is that both these novels, “denounce the vices of Western imperialism through the adventures of White people in the Congo” (Leder, 72). Leder has also noted, “both novels presaged public protests against abuses in the Congo, specifically the excesses of the Leopoldian regime in the Congo and the involvement of Western powers in the murder of Patrice Lumumba” (72). ‘Poisonwood Bible’ can be considered as a “re-writing of ‘Heart of Darkness’ from a woman’s point of view” (Leder, 72). Conrad’s novel, published in 1899, was later criticized for having a racist...
1 Pages (250 words) Literature review

... ID Summary of the books of the Old Testament Books) Matthew The book of Matthew is one of the four books in the gospel genre, The word gospel means the “good news” of the coming of Christ, and this gospel starts with the genealogy of the family into which Jesus was born. The main theme of book is the teaching and miracles of Jesus from the time when he was a child listening to the scribes and Pharisees in the temple, to the time when he was crucified and rose again on the third day. A very famous section contains the sayings of Jesus called the Beatitudes, which describe different people who are blessed by God. Jesus is the main personality in the book, and the twelve disciples play also an important role. Some of the teaching...
3 Pages (750 words) Essay

The Poisonwood Bible By Kingsolver

... marries Anatole whom she settles with in Angola whereas Ruth marries Axelroot but leaves him for a French ambassador for his infidelity and abuse (Kingsolver 143). Her second marriage fails is also unsuccessful and she then marries Remy Fairly and older man who latter dies leaving her with a hotel. Finally book six gives a summary of the sisters’ opinions about their memories while book seven is about Ruth’s experiences on her death bed and forgives her mother. Reference: Kingsolver, Barbara. The Poisonwood Bible. NY: HarperCollins, 1998...
3 Pages (750 words) Book Report/Review

...Comparative essay: comparing two main characters from the Poisonwood Bible by Barbara Kingsolver Chinua Achebe, a Nigerian opines, "People go to Africa and confirm what they already have in their heads and so they fail to see what is there in front of them." The main characters of the novel The Poisonwood Bible, would be absolutely one of those people visiting Africa. However, Chinua Achebe will be surprised to see characters like Leah, for she differs from his above stated concept. Rachel and Leah, the protagonists of The Poisonwood Bible, end up living in the Africa, because of their father's one-year mission in Congo. Rachel was an eldest daughter of the Price family, and the most unlikely person in the world who can bear with Africa...
5 Pages (1250 words) Essay

Evolution of the characters portrayed in the Poisonwood Bible

...EVOLUTION OF THE CHARACRERS, LEAH AND ADAH AS PORTRAYED IN THE NOVEL THE POISONWOOD BIBLE Kingsolver’snovel, The Poisonwood Bible, pictures two main characters Leah Price and Adah Price, who are very similar in many ways. They both are different from each other, and an extent an exaggeration of the real people. There is always a mixture of good and bad traits in a human being. Therefore, we cannot condemn a person as totally as vicious or virtuous. The book beautifully explains the ideology, that contrasting personalities can co-exist within a family and adjust their lives in an unknown country. "We Barbara came from Bethlehem, Georgia, bearing Betty Crocker cake mixes into the jungle," (12) says Leah, one of Nathans daughters. Life...
8 Pages (2000 words) Essay

...Week Six Summary There are pros and cons by having the employees being backed up by a union. One of the advantages is to back up the employees as a group. This will have a stronger impact. The unions play a crucial role in negotiating productivity deals for the employees, thereby providing them good salaries and financial benefits. It is therefore that, employees who see management as unwilling to share power vote for a union (Casico, 2005). Unions also safeguard employees from exploitation and other industry related health implications by upholding health, safety rules, and legislation. The disadvantage of having a union is that it can lead to job losses. If the unions indulge in strikes and protests with the employees for unfeasible...
2 Pages (500 words) Essay

Though both Old and New Testaments reveal the qualities of God describing the creation of the heavens, earth, hell, Adam, Eve and their offspring, yet both these Scriptures differ to one another in tone and interpretation. It is therefore the image of God described in the Old Testament is considered to be the authoritative and commanding one in comparison with the God portrayed in the New Testament, where He appears to be far more benevolent, kind and merciful while making comparison with the Old Testament. The articles under study also reveal the same, according to which God appears to be stringent towards the disobedient, announcing punishments to the wrong-doers time and again, while New Testament draws out the blessings sent b...
5 Pages (1250 words) Research Paper

... Summary and Insights on Selected Bible Passages (2 Sam 7, 11 & 12; Psalms 3, 32, 51,103 & 139) The Bible is said to be one of the greatest manuscripts ever written. It connects man with accurate history, reveals the nature of mankind and most importantly, it uncovers the pure truth about God. In fact, many have sacrificed their lives for it. In fact, many have sacrificed their lives for it. To give further enlightenment on this issue, this paper is expected to impart briefly to the readers simple guided explanations as to what these passages from the second book of Samuel (7, 11 &12) as well as Psalms Nos. 3, 32, 51, 103 and 139 mean at the same time relate their relevance to the development of the Christian faith. Supplementary...
7 Pages (1750 words) Essay

...Six main theoretical perspectives in Psychology The behavioral perspective in psychology attempts to use science to help in understanding of human behavior. It was developed from the observable human behavior. The perspective focuses more on the on the observable, controllable behavior. Many people have criticized it saying that it is dehumanizing given that it does not consider the unconscious part of humans. It is a good theory because it brings scientific evidence to help explain why humans behave in a certain manner. It can be used in industry, education and training. For example, Pavlov used dogs and ringing of the bell to proof that behavior can be conditioned (Myers, 2004). The biological perspective is broader and it assumes...
2 Pages (500 words) Coursework

Summary of the Books of the Bible

The head of Biblical studies, the department of philosophy and Christian education at Taylor University, Michael Harbin (ThD and ThM, Dallas Theological Seminary) enlightens us on his seminal work that covers both the Testaments of the Bible in a colorful and historical survey. Harbin’s account is most intriguing in the explanation he renders of the accounts in the Bible. Chronologically arranged from the inception of God’s creation, the fall of man, the solution to the different problems and finally how the gospel is spread throughout the world. Harbin’s book titled “The Promise and the Blessing” (Harbin Michael, 2005) is easy to follow because of the rich narrative style used by the author.

sponsored ads
Save Your Time for More Important Things
Let us write or edit the essay on your topic "Summary of the six main charcters in the poisonwood bible" with a personal 20% discount.
GRAB THE BEST PAPER

Let us find you another Essay on topic Summary of the six main charcters in the poisonwood bible for FREE!