Comments (0)
Add to wishlistDelete from wishlist
Cite this document
Summary
When in social places that have a combination of these cultures, it is always a perfect opportunity to understand and work with people. Across these cultures, preferences…
Download full paperFile format: .doc, available for editing
HIDE THIS PAPERGRAB THE BEST PAPER96.2% of users find it useful 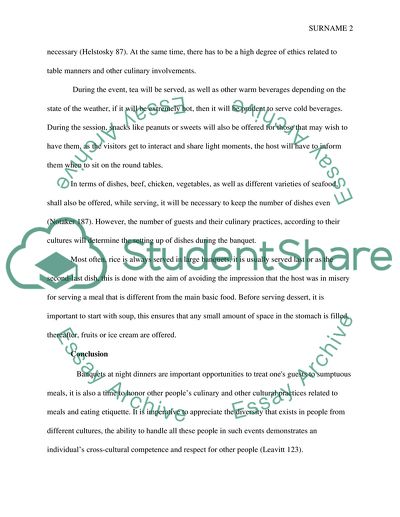 Banquet for a delegation Introduction Across the world, there are millions of people that are characterized by unlimited cultures and traditions. When in social places that have a combination of these cultures, it is always a perfect opportunity to understand and work with people. Across these cultures, preferences for meals, entertainment as well as codes of ethics varies considerably (Ang 24).
Setting up the environment
The number of visitors that will be attending the banquet will determine the kind of table arrangement and set up that will be required. In general, there are various kinds of arrangements that can be used in setting up the environment for the visitors, for instance, in order to maximize the number of banquet tables in the room, they can be set in a corner or fit in the center of the room. In most cases, diagonal placement and arrangement of banquet tables is deemed to be spacious and efficient as opposed to lateral rows.
Setting up a banquet
In making a six-course banquet for visitors from the East, Israel and turkey can require proper planning of the events so that the culinary cultures of the visitors are not violated or offended. However, the banquet being offered may not necessarily incorporate all the cultural values of the visitors, a great degree of comfort and confidence in setting up the banquet is necessary (Helstosky 87). At the same time, there has to be a high degree of ethics related to table manners and other culinary involvements.
During the event, tea will be served, as well as other warm beverages depending on the state of the weather, if it will be extremely hot, then it will be prudent to serve cold beverages. During the session, snacks like peanuts or sweets will also be offered for those that may wish to have them, as the visitors get to interact and share light moments, the host will have to inform them when to sit on the round tables.
In terms of dishes, beef, chicken, vegetables, as well as different varieties of seafood, shall also be offered, while serving, it will be necessary to keep the number of dishes even (Notaker 187). However, the number of guests and their culinary practices, according to their cultures will determine the setting up of dishes during the banquet.
Most often, rice is always served in large banquets, it is usually served last or as the second-last dish, this is done with the aim of avoiding the impression that the host was in misery for serving a meal that is different from the main basic food. Before serving dessert, it is important to start with soup, this ensures that any small amount of space in the stomach is filled, thereafter, fruits or ice cream are offered.
Conclusion
Banquets at night dinners are important opportunities to treat ones guests to sumptuous meals, it is also a time to honor other people’s culinary and other cultural practices related to meals and eating etiquette. It is imperative to appreciate the diversity that exists in people from different cultures, the ability to handle all these people in such events demonstrates an individual’s cross-cultural competence and respect for other people (Leavitt 123).

...? MIDDLE EAST The Middle East is a very important region of the world. In recent years, it has become a kind of fulcrum of world politics. So much happens there that has an impact elsewhere in the world. We need to understand the region’s politics, history, and economics to understand the way that the world is going and how our future will be shaped. With the recent Arab Spring this has become more important than ever. The old order is fading away and being replaced by a new one. Only time will tell what this means for our own lives, but we need to begin studying the situation in an urgent manner. Gelvin’s excerpt is useful in providing the background to the Modern Middle East. It is important to understand how the countries came...
3 Pages(750 words)Essay

... Middle Eastern Studies The last century, particularly after World War 2, has witnessed high levels of conflict and warfare within the Middle East (Richards and Waterbury 345). The most predominant and extended conflict is that of the Arab-Israeli conflict which has born five major wars and is still at play even unto now. Others include the bloody civil wars of Lebanon of 1976-1989; Sudan’s civil war 1959-1971 and 1983-2010 of which the drums of war are once again being sounded between Sudan and the newly independent Southern Sudan over the vast oil of the south. Common characteristics of these conflicts were the conventional use of large armies and the high levels of firepower and destruction. This basic enumeration of the conflicts...
3 Pages(750 words)Essay

... Middle Eastern Studies Oil has only surfaced as an important commodity for the Middle East during the ebbing decadesof the 19th Century and well into the 20th Century (Gelvin 248). This period is what economic historians refer to as the “second industrial revolution.” The second revolution is particularly significant as it marked the foundations for what are now (essentially) petroleum-based economies of the Middle East. Most of the Middle Eastern government policies inclined towards realization of economic and social development has been fuelled by revenues generated various natural resources within the region. The major source of these revenues is derived from the oil resources. Others include the nationalization of assets previously...
6 Pages(1500 words)Term Paper

... Assessor Unit: Place: Middle Eastern Politics Book Review Jimmy Carter, Palestine: Peace not Apartheid, Simon & Schuster, New York, 2006, pp. 288, Price: $ 14.85. This is a momentous book. It has created a furor and a digression at a time when Republican President George Bush Jr. is being grilled from all sides anent his military rendezvous in Iraq in the aftermath of terrorists' attack on the New York Trade Center and Pentagon. Former President Jimmy Carter and a Democrats' leader is a mature political person. He could not have come out with this book at this crucial time without any calculate reason. Carter has invited plethora of criticism not only against him but also his Democratic party. This is a time for Presidential election...
9 Pages(2250 words)Essay

... reflection of the underlying reality and can offer some insight into present religious/cultural relations. That is, there is actually a tension of sorts between identifiable groups of humanity in the present day. However, Samuel Huntington makes a gross oversimplification of things without an in-depth understanding of the nature of present-day conflicts and the complex characteristics of cultures. So, there is no ‘clash of civilizations’ as such. Significantly, his theory fails to satisfactorily explain the post September 11th world. Samuel Huntington outlines a future where the “great divisions among humankind and the dominating source of conflict will be cultural” (Huntington 1993:22) and on this basis divides the world into seven...
6 Pages(1500 words)Essay

Ethos is another type of appeal that presents the good character of the speaker as proof of the point being made. “My faith in the Constitution is whole…and I am not going to sit here and be an idle spectator to the diminution, subversion, destruction of the Constitution…” Jordan puts herself forth as an example of a good American citizen.
Mythos is an appeal founded on cultural values. She stresses the contrast between “a president grown tyrannical” versus the “preservation of the independence of the executive” as one of the time-honored distinctions made by the democratic American.
The first is the proposition of fact, which deals with alleged facts which are debatable or inconclusive. An example of this is the alleg...
5 Pages(1250 words)Essay

... Middle Eastern Cuisines Cooking in Middle East has a high cultural attachment because of the strong family ties in these countries. Middle East countries culture entail large clans that are friendly and hospitable. Offering food is, therefore, an important cultural aspect in Arab countries (Heine, 10). Middle East countries enjoy a variety of food types as well as cooking styles. In these countries, there are both urban and rural foods. In addition, foods differ with the regions such as plains, mountain, sea, streets and nomadic foods. Heine (8) states that although there are numerous variations in Middle Eastern foods, there are various similarities of food from these countries. It is, therefore, paramount to consider the similarities...
2 Pages(500 words)Essay

... Middle Eastern Humanities The Quran is not easy to read and understand as may be thought by some individuals. This is because it is written in classic Arabic, which might easily be misinterpreted in the event of translating the Quran to other languages. For example, the Quran (54:40) uses the verb yassara to mean ease. This same verb, yassara,’ is often misunderstood to mean available. Clearly, one needs to be cautious not to impose his or her own meaning when reading the Quran. 2. Hadith can be referred to as “a short narrative which describes a statement or an action or a tacit approval of the Prophet (sws)” (Iftikhar Para 4). There are various types of hadiths, which tell various stories. For example, Marfu, a tale from the Prophet...
2 Pages(500 words)Assignment

... Teacher If I were an advisor to the Secretary of John Kerry, I would give the following recommendations that would shape and improve the future of US policies in the Middle East. Increase economic aid to refugees which has been affected by war. This includes the civilians from Syria and Iraq who are now refugees in its neighboring countries such as Turkey and Lebanon. Make a clear position that the US is against the Assad regime. That it condemns its horrible barrel bombs. This decision to go against Assad and end his cruel regime will help Turkey send boots on the ground that could help the air strikes and end ISIS. To help remove the distrust against US-Middle East relationship, US should not tolerate Israel in its heavy handed...
1 Pages(250 words)Assignment

Let us find you another Essay on topic Middle Eastern Humanities CH. 5 for FREE!