Comments (0)
Add to wishlistDelete from wishlist
Cite this document
Summary
The Quran is not easy to read and understand as may be thought by some individuals. This is because it is written in classic Arabic, which might easily be misinterpreted in the event of translating the Quran to other languages. For example, the Quran (54:40) uses the verb 'yassara' to mean ease…
Download full paperFile format: .doc, available for editing
HIDE THIS PAPERGRAB THE BEST PAPER91.6% of users find it useful 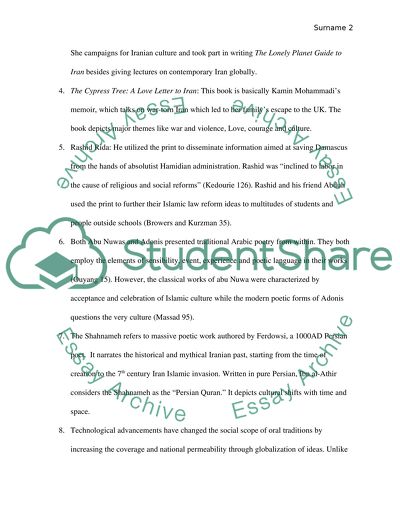 Middle Eastern Humanities The Quran is not easy to read and understand as may be thought by some individuals. This is because it is written in classic Arabic, which might easily be misinterpreted in the event of translating the Quran to other languages. For example, the Quran (54:40) uses the verb yassara to mean ease. This same verb, yassara,’ is often misunderstood to mean available. Clearly, one needs to be cautious not to impose his or her own meaning when reading the Quran.
2. Hadith can be referred to as “a short narrative which describes a statement or an action or a tacit approval of the Prophet (sws)” (Iftikhar Para 4). There are various types of hadiths, which tell various stories. For example, Marfu, a tale from the Prophet, holds that a person is rewarded depending on his or her deeds (Islamic Awareness Para 1). Mauquf is a tale from companion while Maqtu, a tale from a successor, preaches about allegiance to Islamic religion.
3. Kamin Mohammadi: The novelist, journalist and news anchor was born in 1970 in Iran but moved to the UK at a tender age and specializes in the culture of Iran in her works. Mohammadi’s debut piece, The Cypress Tree: A Love Letter to Iran, depicts the author’s physical as well as emotional trip back to her motherland when she turned 27 years old. She campaigns for Iranian culture and took part in writing The Lonely Planet Guide to Iran besides giving lectures on contemporary Iran globally.
4. The Cypress Tree: A Love Letter to Iran: This book is basically Kamin Mohammadi’s memoir, which talks on war-torn Iran which led to her family’s escape to the UK. The book depicts major themes like war and violence, Love, courage and culture.
5. Rashid Rida: He utilized the print to disseminate information aimed at saving Damascus from the hands of absolutist Hamidian administration. Rashid was “inclined to labor in the cause of religious and social reforms” (Kedourie 126). Rashid and his friend Abduh used the print to further their Islamic law reform ideas to multitudes of students and people outside schools (Browers and Kurzman 35).
6. Both Abu Nuwas and Adonis presented traditional Arabic poetry from within. They both employ the elements of sensibility, event, experience and poetic language in their works (Ouyang 15). However, the classical works of abu Nuwa were characterized by acceptance and celebration of Islamic culture while the modern poetic forms of Adonis questions the very culture (Massad 95).
7. The Shahnameh refers to massive poetic work authored by Ferdowsi, a 1000AD Persian poet. It narrates the historical and mythical Iranian past, starting from the time of creation to the 7th century Iran Islamic invasion. Written in pure Persian, Ibn al-Athir considers the Shahnameh as the “Persian Quran.” It depicts cultural shifts with time and space.
8. Technological advancements have changed the social scope of oral traditions by increasing the coverage and national permeability through globalization of ideas. Unlike oral experiences with limited scope, technology has ensured that the Quran and poetic as well as music of the Middle East can now be heard all over the world.
9. Traditional literature is culturally embedded and celebrate while modernist literature tend to question and expose the flows in the very culture that traditional poetry upholds. As such, traditional literature is celebratory while modernist literature tends to be critical, faulting traditional literature.
Works Cited
Browers, Michaelle, and Charles Kurzman. An Islamic Reformation? Lanham, MD: Lexington Books, 2003. Print.
Iftikhar, Asif. The Authenticity of Hadith. Accessed October 30, 2014 Islamic Awareness. The Classification Of Hadith: According To The Reference To A Particular Authority. Accessed October 30, 2014 Kedourie, Elie. Arabic Political Memoirs and Other Studies. New York, NY: Routledge, 2012. Print.
Massad, Joseph A. Desiring Arabs. Chicago: University of Chicago Press, 2007. Internet resource.
Ouyang, Wen-chin. Politics of Nostalgia in the Arabic Novel: Nation-state, Modernity and Tradition. Edinburgh: Edinburgh University Press, 2013. Print. Read More
Share:
Tags
Cite this document
(“Middle Eastern Humanities Assignment Example | Topics and Well Written Essays - 500 words”, n.d.)
Middle Eastern Humanities Assignment Example | Topics and Well Written Essays - 500 words. Retrieved from https://studentshare.org/history/1663228-middle-eastern-humanities

...? DISCRIMINATION: INTERRACIAL MARRIAGES WITHIN THE ARAB CULTURE DISCRIMINATION: INTERRACIAL MARRIAGES WITHIN THE ARAB CULTURE Introduction In almost any type of relationship between at least two individuals, obstacles will be present. This is precisely because each individual has a different set of characteristics.1 Even the best of friends who have been together for several years may encounter occasional clashes due to individual differences. The more time these individuals spend with each other, the more opportunities there are for clashes.2 This speaks a lot when talking about marriage. Marriage entails two individuals to be together, living under the same roof, hopefully for the rest of their lives. Now what can one expect... DISCRIMINATIO...
2 Pages(500 words)Essay

...? MIDDLE EAST The Middle East is a very important region of the world. In recent years, it has become a kind of fulcrum of world politics. So much happens there that has an impact elsewhere in the world. We need to understand the region’s politics, history, and economics to understand the way that the world is going and how our future will be shaped. With the recent Arab Spring this has become more important than ever. The old order is fading away and being replaced by a new one. Only time will tell what this means for our own lives, but we need to begin studying the situation in an urgent manner. Gelvin’s excerpt is useful in providing the background to the Modern Middle East. It is important to understand how the countries came... to be...
3 Pages(750 words)Essay

...Middle Eastern Studies The formation of s in the Middle East was primarily by partitioning of the former Levante and Mesopotamia and through anti-imperialistic struggle characterized by revolutions and conquests. Subsequent activities of the League of Nations within this region aided the process of nation-building through the introduction of mandated systems (Gelvin). The recent civilian revolts within the Arab states seem to be a trip back into history. The ‘Arab Spring’ of 2010-2012 has seen the emergence of resistance against ruling governments (particularly those that are military-led) including Egypt, Libya, Tunisia, Bahrain, Morocco, Syria, Greece and Algeria. The Arab Spring of...
3 Pages(750 words)Essay

...Middle Eastern Cuisines Cooking in Middle East has a high cultural attachment because of the strong family ties in these countries. Middle East countries culture entail large clans that are friendly and hospitable. Offering food is, therefore, an important cultural aspect in Arab countries (Heine, 10). Middle East countries enjoy a variety of food types as well as cooking styles. In these countries, there are both urban and rural foods. In addition, foods differ with the regions such as plains, mountain, sea, streets and nomadic foods. Heine (8) states that although there are numerous variations in Middle Eastern foods,...
2 Pages(500 words)Essay

... Banquet for a delegation Introduction Across the world, there are millions of people that are characterized by unlimited cultures and traditions. When in social places that have a combination of these cultures, it is always a perfect opportunity to understand and work with people. Across these cultures, preferences for meals, entertainment as well as codes of ethics varies considerably (Ang 24). Setting up the environment The number of visitors that will be attending the banquet will determine the kind of table arrangement and set up that will be required. In general, there are various kinds of arrangements that can be used in setting up the environment for the visitors, for instance, in order to maximize the number of banquet... Banquet for ...
2 Pages(500 words)Essay

...Teacher If I were an advisor to the Secretary of John Kerry, I would give the following recommendations that would shape and improve the future of US policies in the Middle East. Increase economic aid to refugees which has been affected by war. This includes the civilians from Syria and Iraq who are now refugees in its neighboring countries such as Turkey and Lebanon. Make a clear position that the US is against the Assad regime. That it condemns its horrible barrel bombs. This decision to go against Assad and end his cruel regime will help Turkey send boots on the ground that could help the air strikes and end ISIS. To help remove the distrust against US-Middle East relationship, US should not...
1 Pages(250 words)Assignment

Let us find you another Assignment on topic Middle Eastern Humanities for FREE!