Comments (0)
Add to wishlistDelete from wishlist
Cite this document
Summary
After his election as the president of Southern Christian Leadership Conference, Martin Luther King, at 28 years, asserted the mission to save the soul of America. Luther believed that the treatment needed for America was analogous to the healing provided by Karen Horney’s…
Download full paperFile format: .doc, available for editing
HIDE THIS PAPERGRAB THE BEST PAPER99% of users find it useful 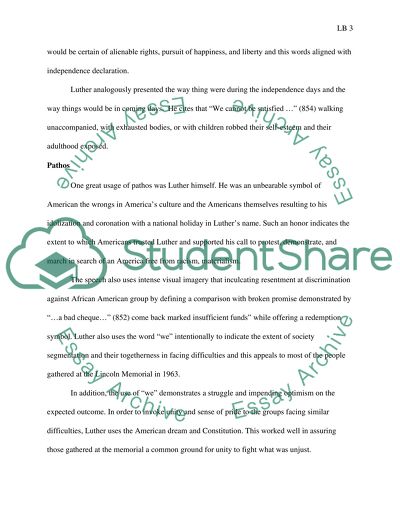 LB 715 Martin Luther King Paper Introduction After his election as the president of Southern Christian Leadership Conference, Martin Luther King, at 28 years, asserted the mission to save the soul of America. Luther believed that the treatment needed for America was analogous to the healing provided by Karen Horney’s cure of the neurotic (Horney 1-4). However, Martin Luther used demonstrations, protests, and marches as a way of exposing America’s ills instead of letting shame and guilt consume her. Luther specifically offered individuated culture as the course towards healing and wholesomeness. Two highly regarded achievements by Luther still remain and are Civil Rights Act of 1964 and the Voting Rights Act of 1965. These victories were achieved a year and two years after Luther’s electrifying speech of 1963 delivered from Lincoln Memorial. Advancement towards racial equity was also evident for Africa Americans by 1968. With such historical changes within America’s after Luther’s great speech, this paper explores ethos and logos as use in his speech moving people to embrace change.
Logos
Logos rhetoric is used in the speech excellently and is demonstrated through high-level reasoning and logical plea. Everything that Luther says is justified like the generalization concerning segregation and discrimination. For instance, the speech begins by stating America’s history followed by an explanation of the reasons why there was a meeting.
According to Luther, a time had come when God’s children would enjoy opened “...doors of opportunity…” Luther also explained clearly the reason for holding the meeting at Washington as intended at “…cash a check…”(852) This meant that all men, black and white, would be certain of alienable rights, pursuit of happiness, and liberty and this words aligned with independence declaration.
Luther analogously presented the way thing were during the independence days and the way things would be in coming days. He cites that “We cannot be satisfied …” (854) walking unaccompanied, with exhausted bodies, or with children robbed their self-esteem and their adulthood exposed.
Pathos
One great usage of pathos was Luther himself. He was an unbearable symbol of American the wrongs in America’s culture and the Americans themselves resulting to his idolization and coronation with a national holiday in Luther’s name. Such an honor indicates the extent to which Americans trusted Luther and supported his call to protest, demonstrate, and march in search of an America free from racism, materialism.
The speech also uses intense visual imagery that inculcating resentment at discrimination against African American group by defining a comparison with broken promise demonstrated by “…a bad cheque…” (852) come back marked insufficient funds” while offering a redemption symbol. Luther also uses the word “we” intentionally to indicate the extent of society segmentation and their togetherness in facing difficulties and this appeals to most of the people gathered at the Lincoln Memorial in 1963.
In addition, the use of “we” demonstrates a struggle and impending optimism on the expected outcome. In order to invoke unity and sense of pride to the groups facing similar difficulties, Luther uses the American dream and Constitution. This worked well in assuring those gathered at the memorial a common ground for unity to fight what was unjust.
Conclusion
I believe that Luther successfully used rhetoric devices of pathos and logos in electrifying the people to have the government grant them the rights to vote and civil rights like any white American. He uses specific examples to ground his argument and metaphors to demonstrate contrasting concepts. In the end, he wins the trust of the people who even after his death carryon with his work against racism and discrimination.
Works Cited
Horney, K. The Neurotic Personality of Our Time. New York: W. W. Norton & Company, 1937.
Little Brown
Norton Reader Read More
Share:
Tags
Cite this document
(“Martin luther king paper Essay Example | Topics and Well Written Essays - 500 words”, n.d.)
Retrieved de https://studentshare.org/english/1655377-martin-luther-king-paper

...? Martin Luther king Jr. The purpose of this paper is to provide a critical discussion on Martin Luther King Jr. The format that this paper will utilize is to first discuss two kinds of laws-those that are normally right and those that are morally wrong and then postulate how Martin Luther King Jr viewed these laws. After this point a few examples of laws that I personally believe are morally wrong. As a final point I will discuss how justified I would be on breaking these laws and if I would be prepared (As King was) to pay the penalties demanded of one who breaks the law? According to the prescribed reading it was postulated by King that there are two types of laws which are the 'Just' and the 'Unjust'. King stated that he was in fact...
2 Pages(500 words)Essay

...? Martin Luther was an amazingly forward thinking person who was brave enough to challenge some of the fundamental precepts of the Catholic Church. His 95 Theses were a document he nailed to his church’s door in order to spark public debate, mostly surrounding the sale of indulgences and the Church’s ability to free people from purgatory. Martin Luther’s 95 Theses were an attempt to clearly define a direct connection between God and worshipers without the intermediary necessity of the church, to make it clear to Christians that a life of mercy is better than the purchasing of indulgences, and to illuminate corrupt practices from religious leaders of the time. The fundamental thing Luther addressed in his Theses was the sale of indulgences...
4 Pages(1000 words)Essay

... that we are merely one or the other. We are an amalgam of Africa and America. James Baldwin once said ... "This country is going to be transformed. It will not be transformed by an act of God, but by all of us, by you and me. I don't believe any longer that we can afford to say that it is entirely out of our hands. We made the world we're living in" (9Baldwin, 1961) End Notes Claybome Carson, Ed. The Papers of Martin Luther King, Jr. Vol. III: Birth of a New Age. Berkeley: U of California P, 1997 Nobelprize.org, http://nobelprize.org/peace/laureates/1964/king-bio.html Martin Luther King, Jr.'s Doctrine of Human Dignity, Jr. Rufus Burro,: The Western Journal of Black Studies. Volume: 26. Issue: 4. Publication Year: 2002...
7 Pages(1750 words)Essay

...Martin Luther King in his autobiography is completely concerned about the issue of racial discrimination and injustice in the of race and colour. He takes up the issue of liberty, equality and justice, three truths that have the utmost currency even in the present times. The blacks in America were promised their rights in the name of “Emancipation Proclamation”, but according to Martin Luther King, they were not given any thing that they were promised. They still wallowed in ugly slums demean life and cruelty and discrimination. So Luther King Jr. Organised a non-violent protest march which served to dramatise these ugly realities of America and emphasise the nature of true democracy. He delivers the historically famous speech: “I have...
2 Pages(500 words)Essay

... Martin Luther King Jr Clergyman To A Charismatic Civil Rights Movement Leader Every man comes into this world, plays his role either in a positive or negative way and then leaves footprints after making his contribution but there are some who are remembered for centuries for the efforts they put in. Martin Luther King Jr. was one such man who spent all of his life struggling for the rights of African Americans. The best thing about him was that he led non-violent protests for the members of his race. Martin Luther King Jr. was a clergyman who introduced social change in a peaceful way. Later, with the passage of time, he became a prominent and a famous leader who was conducting a civil rights movement to fight for the equality of African...
2 Pages(500 words)Research Paper

Douglass establishes authority by showing brutality of masters like the instance where he recalls Captain Antony whipping Aunt Hester, a violent episode after the captain noticed that Hester had gone with a slave without the captain’s orders. Though Douglass implies the captain had sexual interest in Hester, who was beautiful, the captain strips her to waist, ties her and then whips her to appoint where blood drips to the floor. In this instance, the young Douglass became terrified and hides in a closed fearing he would be the next to be whipped; moreover, Douglas shows that the captain had two sons who had control over slaves, which cement’s his authority. The first paragraph in his narrative, Douglass demonstrates double rationa...
4 Pages(1000 words)Essay

... Inspiration of Martin Luther King Jr. In different parts of the world, social democracy has been associated to efforts of iconic individuals, who used relentless efforts to liberate citizens. Such influential people receive significant national and international recognition because of the value attached to social justice issues. Of more significance, key advocators of social justice not only receive recognition but also leave behind legacies cherished for long time. In this regard, Martin Luther King Jr. is one of the most memorable social justice propagators in the U.S. Martin Luther King Jr. grew up in a society where there was a lot of segregation but he rose up against the social injustices in various ways that even saw him...
8 Pages(2000 words)Essay

... The of humanity of being just and fair has changed since the days of the late Dr. Martin Luther King Jr. In hisspeech, he stated that no matter how long it takes, justice and fairness continues to improve amongst people in society. This paper builds and proves that the same principle applies to the history of the US from 1877 up to the present. The civil rights movements in the 1960s fought hard for economic equality of all people despite the color of their skins (Brands et., p765). In the later years, the movement faced many frustrations from the government. Many union leaders were arrested while others died during protests (Brands et., p766). Despite, the hardship, their spirits never died. No matter how long it took, US now enjoys...
1 Pages(250 words)Essay

Let us find you another Essay on topic Martin luther king paper for FREE!