Comments (0)
Add to wishlistDelete from wishlist
Cite this document
Summary
In Brian’s case, it’s a bit absurd because Gretchen’s personality and her musical tastes are not really compatible with saying “I love you/ I really like you a lot” using a…
Download full paperFile format: .doc, available for editing
HIDE THIS PAPERGRAB THE BEST PAPER99% of users find it useful 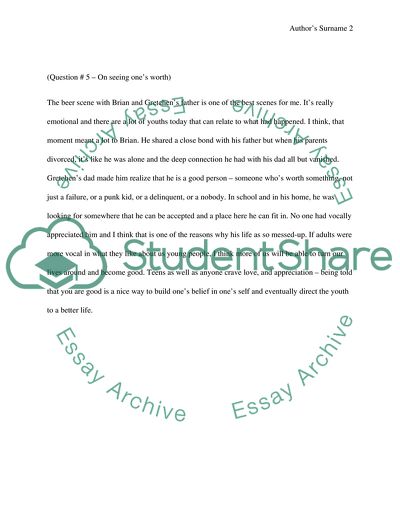 Extract of sample "Hairstyles of the Damned Discussion 2"

Hairstyles of the Damned: On Falling In-Love and Seeing One’s Worth (Question # 3 – On falling in-love)
Making a mixed tape for someone you love is so 90’s, yet for me, I think it’s quite sweet. In Brian’s case, it’s a bit absurd because Gretchen’s personality and her musical tastes are not really compatible with saying “I love you/ I really like you a lot” using a collection of punk, rock, and metal songs. Also, their set-up as “friends” complicates how Gretchen will react to the mixed tape because they listen to their type of music together always – a mixed tape is something ordinary not something special that could stand as a symbol for love. But for what it’s worth, it is noble because Brian really put effort in choosing songs that he thinks Gretchen would like. It speaks about how he really wants to impress her and make her feel that his feelings are true. If Brian was able to make the perfect mixed tape, I think that Gretchen will still not fall for him because Gretchen just does not see Brian as a lover. Gretchen’s type in the book is Tony Degan, and though he’s a jerk and it was not fair of her to put Brian in the “friendzone”, sometimes, even in life, that’s just how it is. Brian just needs to be content in being her friend because that’s all that she can be for him.
(Question # 5 – On seeing one’s worth)
The beer scene with Brian and Gretchen’s father is one of the best scenes for me. It’s really emotional and there are a lot of youths today that can relate to what had happened. I think, that moment meant a lot to Brian. He shared a close bond with his father but when his parents divorced, it’s like he was alone and the deep connection he had with his dad all but vanished. Gretchen’s dad made him realize that he is a good person – someone who’s worth something, not just a failure, or a punk kid, or a delinquent, or a nobody. In school and in his home, he was looking for somewhere that he can be accepted and a place here he can fit in. No one had vocally appreciated him and I think that is one of the reasons why his life as so messed-up. If adults were more vocal in what they like about us young people, I think more of us will be able to turn our lives around and become good. Teens as well as anyone crave love, and appreciation – being told that you are good is a nice way to build one’s belief in one’s self and eventually direct the youth to a better life.
Reference
Meno, Joe. Hairstyles of the Damned. Punk Planet Books. 2004. Print. Read More
Share:
Tags
Cite this document
(“Hairstyles of the Damned Discussion 2 Assignment”, n.d.)
Hairstyles of the Damned Discussion 2 Assignment. Retrieved from https://studentshare.org/english/1650884-hairstyles-of-the-damned-discussion-2

“Hairstyles of the Damned Discussion 2 Assignment”, n.d. https://studentshare.org/english/1650884-hairstyles-of-the-damned-discussion-2.
Comments (0)
Click to create a comment or rate a document

CHECK THESE SAMPLES OF Hairstyles of the Damned Discussion 2

Marxist Interpretation of Hairstyles of the Damned

Influence of IT on our lives

Nothing But The Truth by avi book talk

Hairstyles of the Damned Discussion

...Full Hairstyles of the Damned (An essay discussion) 26 June Question No one problem that Brian has with Gretchen is he is in love with her but does not know how to profess his love. Additionally, his complex emotional responses to Gretchen are colored by his perception that Gretchen is acting like a tomboy most of the time. She does not act feminine like most of the other girls but instead can be rough and masculine such as when twisting the arm of Amy Schaffer, give a big black eye to Lisa Hensel, or be in a hair-pulling incident with Polly Winchensky (Meno 4). Gretchen is not like other girls. Brian loved his father because he is quiet unlike his mother who is unpredictable at times...
1 Pages(250 words)Assignment

...Mark Twain’s “The Damned Human Race” as a Great American Essay Creative legacy of Mark Twain appears to be a contrastive material with the transition from enthusiastic approach at the opening phase of his oeuvre to the decadent mood in the end of his writer’s career. It is not surprising that such a character of Twain’s works is nothing less than a reflection of his views and opinions on one or another stage of the life. Just so in his essays written in late years of the 19th century, the writer occupies a critical position on all key issues of the peculiarities of his country, criticizing dominating policy, religion, and morality. It is a kind of printed appearances on topical contemporary questions. In fact, it is the...
5 Pages(1250 words)Book Report/Review
sponsored ads
Save Your Time for More Important Things
Let us write or edit the assignment on your topic "Hairstyles of the Damned Discussion 2" with a personal 20% discount.
GRAB THE BEST PAPER

Let us find you another Assignment on topic Hairstyles of the Damned Discussion 2 for FREE!