Comments (0)
Add to wishlistDelete from wishlist
Cite this document
Summary
She is one and a half years old and with my five minutes, three-day observation of Mercy, I saw that she was simply a normal infant who behaved similar to how other people would behave during her stage of life. She had…
Download full paperFile format: .doc, available for editing
HIDE THIS PAPERGRAB THE BEST PAPER94.8% of users find it useful 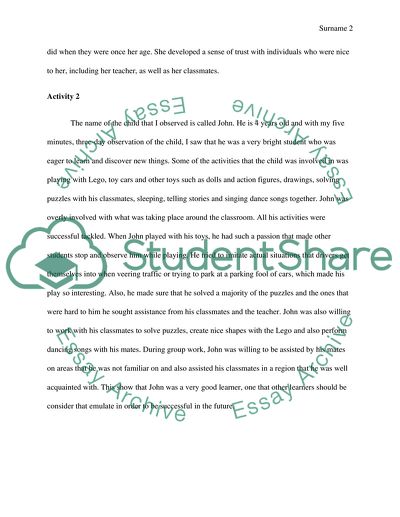 CCEI1220P1 Activity The of the infant that I was observed is called Mercy. She is one and a half years old andwith my five minutes, three-day observation of Mercy, I saw that she was simply a normal infant who behaved similar to how other people would behave during her stage of life. She had a wide supply of toys, drawing books, sticky word papers, objects for piling games, match puzzles, plastic guitars and talking toys, which educate vocabulary. Just like other students, Mercy made use of her toys by playing with them, and when she got bored, she inserted them on her mouth. Also, it seemed that Mercy was not aware of what a majority of the gadgets were for as she, at times, innocently threw her toys against the wall, which is simply a way of seeing what would happen to them. She used to trace objects on the drawing paper and the teacher also encouraged her to come up with complete words using the sticky word papers. She also used to produce rhythms with her plastic guns just by shaking it. It was as if the guitar had some ball bearings in it, which produced the rhythm. She opted to play by herself a majority of times, but this was because the school environment was not similar to the home environment where she feels much safer. What Mercy did could be equated to what many other individuals did when they were once her age. She developed a sense of trust with individuals who were nice to her, including her teacher, as well as her classmates.
Activity 2
The name of the child that I observed is called John. He is 4 years old and with my five minutes, three-day observation of the child, I saw that he was a very bright student who was eager to learn and discover new things. Some of the activities that the child was involved in was playing with Lego, toy cars and other toys such as dolls and action figures, drawings, solving puzzles with his classmates, sleeping, telling stories and singing dance songs together. John was overly involved with what was taking place around the classroom. All his activities were successful tackled. When John played with his toys, he had such a passion that made other students stop and observe him while playing. He tried to imitate actual situations that drivers get themselves into when veering traffic or trying to park at a parking fool of cars, which made his play so interesting. Also, he made sure that he solved a majority of the puzzles and the ones that were hard to him he sought assistance from his classmates and the teacher. John was also willing to work with his classmates to solve puzzles, create nice shapes with the Lego and also perform dancing songs with his mates. During group work, John was willing to be assisted by his mates on areas that he was not familiar on and also assisted his classmates in a region that he was well acquainted with. This show that John was a very good learner, one that other learners should be consider that emulate in order to be successful in the future. Read More
Share:
Tags
Cite this document
(“CCEI1220P1 Essay Example | Topics and Well Written Essays - 500 words”, n.d.)
CCEI1220P1 Essay Example | Topics and Well Written Essays - 500 words. Retrieved from https://studentshare.org/education/1624045-ccei1220p1

CHECK THESE SAMPLES OF CCEI1220P1

What part does ethics play in food marketing

The Franklin Fund and Tiffany & Co

The Social causes of Poverty in California

Changes that Women Have Undergone through the Years

Leda and the Swan

Translation of the New Testament of the Bible

... CCEI1220P4 Activity According to my observations, Jacob needs to be assisted to improve his cognitive, emotional and communication skills. He made five movements to push himself up to reach Mary’s extended arms. He also made five movements while sitting on Mary’s supported arms. The child made six movements to reach dangling objects that were in front of him, but did not make any effect to look for a toy beyond his tracking range. Jacob did not also make an effort to find partially hidden objects, for instance, when Mary placed the rattle under a pillow, Jacob looked around and then he began to cry. This was a cognitive test, which Jacob failed. He never made any effort to think and search where the rattle was hidden, but instead...
2 Pages(500 words)Essay

The Concept and Benefits of the Database System

Global Strategy of Business Education in the UK

10 Pages(2500 words)Essay
sponsored ads
Save Your Time for More Important Things
Let us write or edit the essay on your topic "CCEI1220P1" with a personal 20% discount.
GRAB THE BEST PAPER

Let us find you another Essay on topic CCEI1220P1 for FREE!