Comments (0)
Add to wishlistDelete from wishlist
Cite this document
Summary
The researchers chose a specific play period for the students who were suffering from autism as normally they are not able to exhibit their social interaction skills. In order to make them more confident the researchers decided to involve these students in a play period as it…
Download full paperFile format: .doc, available for editing
HIDE THIS PAPERGRAB THE BEST PAPER99% of users find it useful 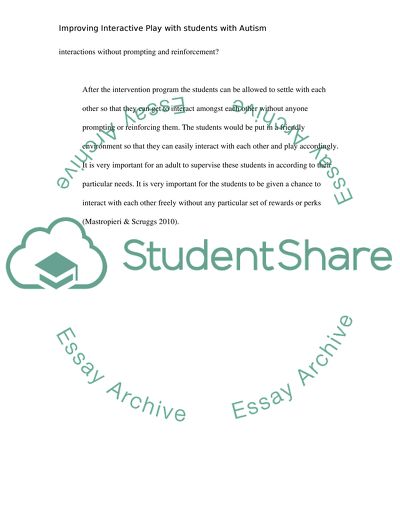 Extract of sample "Improving Interactive Play for students with Autism"

Improving Interactive Play for with Autism Why did the researchers choose a play period to implement the social interaction intervention?
The researchers chose a specific play period for the students who were suffering from autism as normally they are not able to exhibit their social interaction skills. In order to make them more confident the researchers decided to involve these students in a play period as it might interest them and then intervened accordingly to help improve their initiation techniques (Mastropieri & Scruggs 2010).
2. How could you implement this intervention in a situation other than play period?
The similar intervention could have been implemented in another scenario where the students were simply informed that they would receive a particular reward for initiating a conversation with their peers. The conversation could have been a casual one as the only thing important in these students would have been relating to their initiating powers. This would help to increase the overall initiating power of these students and thus help them to interact with each other easily without any conflict. Lastly the students could have been rewarded in accordance to their particular needs with the things that they desire the most (Mastropieri & Scruggs 2010)
3. After training, what could you do to help students with autism improve their social interactions without prompting and reinforcement?
After the intervention program the students can be allowed to settle with each other so that they can get to interact amongst each other without anyone prompting or reinforcing them. The students would be put in a friendly environment so that they can easily interact with each other and play accordingly. It is very important for an adult to supervise these students in according to their particular needs. It is very important for the students to be given a chance to interact with each other freely without any particular set of rewards or perks (Mastropieri & Scruggs 2010).
References
Mastropieri, M. A. & Scruggs, T. E.  (2010). The inclusive classroom: Strategies for effective differentiated instruction (4th ed). Upper Saddle River, NJ: Pearson. Read More
Share:
Tags
Cite this document
(“Improving Interactive Play for students with Autism Essay”, n.d.)
Improving Interactive Play for students with Autism Essay. Retrieved from https://studentshare.org/education/1620448-improving-interactive-play-for-students-with-autism

“Improving Interactive Play for Students With Autism Essay”, n.d. https://studentshare.org/education/1620448-improving-interactive-play-for-students-with-autism.
Comments (0)
Click to create a comment or rate a document

CHECK THESE SAMPLES OF Improving Interactive Play for students with Autism

The processional staging was considered an extremely taxing task as compared with other theatrical forms but was a distinctive physical feature of “Noah’s Ark,” which is a medieval play. The play involved planning a clearly defined circuit, which can be pushed through a synchronized schedule and traversed in a reasonable amount of time. The actors and actresses were also faced with several difficulties, such as the rigors of continuously staging a single episode repeatedly throughout the day.

Revivifying “Noah’s Ark” entailed experiments different from the traditional mobile pageantry stations or theatre-in-the-round which used to characterize past presentations. A mobile is an import...

“Autistic spectrum disorders share a triad of impaired social interaction, communication, and imagination, associated with a rigid, repetitive pattern of behavior” (Wing, 1996). I strongly believe that social interaction skills also get affected due to autism, which creates many problems for children. In my op...
6 Pages(1500 words)Coursework

The Relationship between Playing Video Games and Students Academic Achievement

Games played with any electronic devices other than personal computers having video facilities are taken as the operational definition of video games in this study. This may include gaming systems such as Nintendo, Nintendo DS and DSi, X-Box, Playstation, Game Cube, and Wii. According to Gouzouasis et al (n.d), “the type of extra-curricular activities like playing an instrument versus playing video games has differential effects on the person’s skill acquisition and personality development” (Gouzouasis et al, n. d, p.12). Nobody has any doubt about the ability of video games in improving skills like numerical ability, quick decision making, synthesis, analysis, etc. However, excessive playing of video games has u...
7 Pages(1750 words)Literature review

The Bangkok High school district’s goals are increased graduation rates for senior high school students. The areas of concern include improving passing the end of year exam percentage from 68.8% to 75% (Bangkok School, 2009).

The mission of Bangkok High School is to prepare students for a posi...
9 Pages(2250 words)Research Proposal

Emily's immediate supervisor deems her ‘over-enthusiasm’ as an impediment to her efficiency at work. Thus, she is recommended to lessen the time she spends for every patient.
Although she understands her supervisor’s recommendation from a business operation’s point-of-view, she is still adamant in her belief that gaining customer insights is crucial in aiding the pharmacy in better developing its line-up of medicinal offers. Carrying this burden, Emily consults her mentor in The Medical Nation, Dr Hussa Al Husine.
The mentoring session with Dr Husine happens twice a week for three weeks after Emily’s daily working period. Even without having a firm background in professional coaching, Emily thin...
10 Pages(2500 words)Coursework
sponsored ads
Save Your Time for More Important Things
Let us write or edit the essay on your topic "Improving Interactive Play for students with Autism" with a personal 20% discount.
GRAB THE BEST PAPER

Let us find you another Essay on topic Improving Interactive Play for students with Autism for FREE!