Comments (0)
Add to wishlist Delete from wishlist
Cite this document
Summary
The author of the paper "Understanding Intertextuality and How It Can Be Used in Story Sack" states that intertextuality means employing the concept/research of any existing textual compilation, poetic excellence or cinematic ploy into a brand new thought process…
Download full paper File format: .doc, available for editing
HIDE THIS PAPERGRAB THE BEST PAPER96.8% of users find it useful 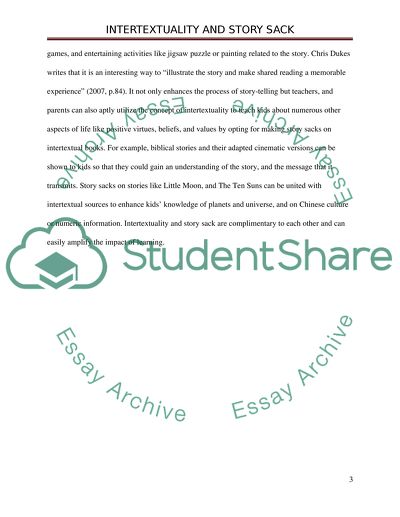 Understanding Intertextuality and how it can be used in Story Sack By: Presented Date
In almost every genre of contemporary literature or art, intertextuality occupies a central and pivotal position (Allen, 2013, p.14). The norm that originated in the early 20th century by the mastermind of Swiss linguist Ferdinand de Saussure and was devised later by Julia Kristeva of Bulgarian-French origin can be defined as the interdependency of a previous text on the other within one particular piece of art/literature/media. (Juvan, 2008, p.12) Intertextuality means employing the concept/research of any existing textual compilation, poetic excellence or cinematic ploy into a brand new thought process. The methodology includes quotations, plagiarism, citation, parody, textual, imagery, and metaphor. The drive behind adopting intertextuality can be varying and diverse. It can be used to propagate an acclaimed theory, quote someone’s exclusive thoughts to make a point, or to promote and popularise cultural orientation and fashion/ lifestyles of different regions. Intertextuality is also applied to explain certain ambiguous concepts of any literary or artistic work. Furthermore, it can be adopted to present a brand-new perspective on an existing work. Sudha Shastri provided a perfect example of intertextuality by pointing out the fact that Jean Rhys wrote “Wide Sargasso Sea” (1966) to present a neutral and modernized take on Charlotte Bronte’s classic novel “Jane Eyre” (1847). (2001, p.3) Steven Pressfields The Legend of Bagger Vance (1995) borrowed its plot from the epic Hindu verse Bhagvad Gita. (Byrd, 2007, p.3) Similarly Jane Austen’s masterpiece literature Emma was the influencing factor behind Amy Heckerling’s year 1995 movie Clueless. (Baker, 2008, p.534)
Story sack is an innovative concept to make kids learning process at school fun-filled and effective (Browne, 2007, p.76). It is an over-sized cloth bag that contains additional props related to a story such as audio-visual sources like CDs or DVDs, toys and models of the characters, games, and entertaining activities like jigsaw puzzle or painting related to the story. Chris Dukes writes that it is an interesting way to “illustrate the story and make shared reading a memorable experience” (2007, p.84). It not only enhances the process of story-telling but teachers, and parents can also aptly utilize the concept of intertextuality to teach kids about numerous other aspects of life like positive virtues, beliefs, and values by opting for making story sacks on intertextual books. For example, biblical stories and their adapted cinematic versions can be shown to kids so that they could gain an understanding of the story, and the message that it transmits. Story sacks on stories like Little Moon, and The Ten Suns can be united with intertextual sources to enhance kids’ knowledge of planets and universe, and on Chinese culture or numeric information. Intertextuality and story sack are complimentary to each other and can easily amplify the impact of learning.

...Understanding Facial Expressions Introduction Facial expressions are distinct human features which set us apart from the other creatures in the animal kingdom. For every emotion we feel – from the happy to the sad to the pained and to the ecstatic, there are various facial expressions that we can manifest. This paper shall discuss facial expressions and how we can understand and interpret them from a psychological point of view. Various psychology journals shall be used in order to explain and evaluate these facial expressions. Discussion In a study by Calder and Young (2005), they sought to understand the recognition of facial identity and facial expressions. They first pointed out that our face can portray different emotions...
6 Pages (1500 words) Case Study

With the increased globalization and competition, it has become very difficult to maintain customer loyalty. The same has been experienced by UK mobile service providers. Customer retention is an acute problem for companies. It has been found that the lack of proper customer relationship management is mainly responsible for this global issue. Vodafone Group Plc, UK’s largest telecommunication company has been selected for undertaking the research to determine the root cause of this problem and to investigate other relevant reasons. A report of 2009 published by the company reveals that there are severe problems related to customer retention. It is well known that the mobile phone industry has boomed over the last eight years...
19 Pages (4750 words) Research Proposal

The Story of General Electric

Securities and Exchange Commission with the products that include: electric and electronic equipment, financial services, aircraft engines, engineered materials, and medical imaging equipment.3 The company believed that to become successful, it should at the same time be responsible for its actions, to understand the company’s impact on the society, and have a balance relating to all of its stakeholders.4 The company’s goal is “to grow responsibly while engaging stakeholders.”5 In order to respond to the rising environmental and social problems, GE is one of the companies that implemented aggressive corporate responsibility strategies.6 Yet GE is one of those companies that are “facing increasing pres...
6 Pages (1500 words) Case Study

One of the major policies undertaken by the British Government in the last two years was fiscal decentralization. The government has taken steps to ensure that improvement is made in the country’s...

Organic Chemistry: How Vitamin B Works on the Body

The results confirmed that B12 is essential for the production of the RBC and the increase in the RBC level in the infants undergoing Vitamin B12 and erythropoietin therapy concludes the importance.

Vitamin B is water-soluble molecules. They easily get dispersed throughout the body. They are not stored in any part of the body and are excreted through urine. Hence these vitamins must be replenished regularly. (Elliot 2007). There are eight water-soluble B vitamins which play an important role in cell metabolism. Initially, Vitamin B was considered as a single vitamin but later it was found to be a group of eight water-soluble components. This is generally referred to as vitamin B complex. Vitamin B provides a lot of heal...

Human development is the science of studying how a human develops physically, psychologically as well as socially with the passage of time. It is a branch of psychology that studies the behavioral changes that come within people as they grow older (Meggitt, 2006). The subject that I...

The historical context or background of Shakespeare's age and Montaignes is important. Shakespeare and Montaigne both lived in an age when exploration and colonial expansion was in its early phase. At the forefront of the European expansion into the new world, was the early sixteenth-century exploration and colonization of the West Indies, South, and Central America1. What is important to note, is that colonization or colonialism brought with it an imperial set of attitudes and beliefs. The people of the new world were largely viewed as uncivilized, and the state of nature that they were living in was viewed as inferior to the European invaders. It is these attitudes, for example, that facilitated the enslavement of people. Likewi...
7 Pages (1750 words) Essay
sponsored ads
Save Your Time for More Important Things
Let us write or edit the essay on your topic "Understanding Intertextuality and How It Can Be Used in Story Sack" with a personal 20% discount.
GRAB THE BEST PAPER

Let us find you another Essay on topic Understanding Intertextuality and How It Can Be Used in Story Sack for FREE!