A theroretical written paper ( discuss Howard Gardner's intelligence theory. How could the teacher implement the theory to ensure that all pupils needs are addressed - Essay Example

Comments (0)
Add to wishlistDelete from wishlist
Cite this document
Summary
Through the assistance of Gardner’s theory of multiple intelligences, educators recognize and appreciate the learners’ diversity in the styles they use for learning and their learning potentials among other issues. This helps them to appreciate how these learners employ…
Download full paperFile format: .doc, available for editing
HIDE THIS PAPERGRAB THE BEST PAPER95.2% of users find it useful 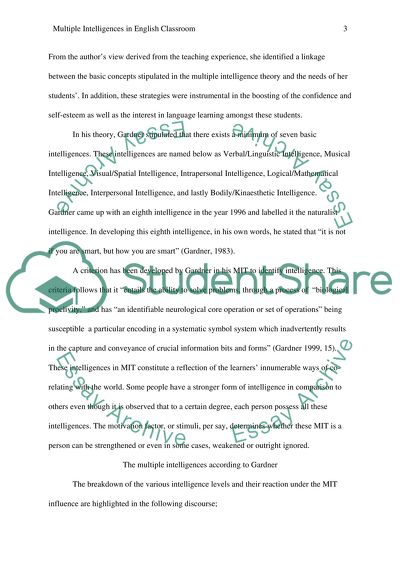 Extract of sample "A theroretical written paper ( discuss Howard Gardner's intelligence theory. How could the teacher implement the theory to ensure that all pupils needs are addressed"

Download file to see previous pages The hands-on experience is gained as a teacher heightened my interest in the acquisition of language, the development of learning modes and revolution of teaching methodology. Thus stated, this paper purposes to discuss the Gardner’s multiple intelligent theory and explore its applications in the classroom environment as well as out of class in a general bid to assist students acquire effective learning strategies and implement them effectively for the achievement of lifelong learning. Vocational students have been observed to have a lower motivation for learning the language.
This has resulted into them being less prepared and competent in learning the English language. Even though the author observed that some of her students had inherent and different talents in other various fields for example story- telling, singing or painting, these students were considered to be dumb because of their failure in academics.
From the author’s view derived from the teaching experience, she identified a linkage between the basic concepts stipulated in the multiple intelligence theory and the needs of her students’. In addition, these strategies were instrumental in the boosting of the confidence and self-esteem as well as the interest in language learning amongst these students.
In his theory, Gardner stipulated that there exists a minimum of seven basic intelligences. These intelligences are named below as Verbal/Linguistic Intelligence, Musical Intelligence, Visual/Spatial Intelligence, Intrapersonal Intelligence, Logical/Mathematical Intelligence, Interpersonal Intelligence, and lastly Bodily/Kinaesthetic Intelligence.
Gardner came up with an eighth intelligence in the year 1996 and labelled it the naturalist intelligence. In developing this eighth intelligence, in his own words, he stated that “it is not if you are smart, but how you are smart” (Gardner, 1983).
A criterion has been developed by Gardner in ...Download file to see next pagesRead More
Share:
Tags
Cite this document
(“A theroretical written paper ( discuss Howard Gardner's intelligence Essay”, n.d.)
Retrieved from https://studentshare.org/education/1605563-a-theroretical-written-paper-discuss-howard-gardners-intelligence-theory-how-could-the-teacher-implement-the-theory-to-ensure-that-all-pupils-needs-are-addressed

CHECK THESE SAMPLES OF A theroretical written paper ( discuss Howard Gardner's intelligence theory. How could the teacher implement the theory to ensure that all pupils needs are addressed

As a result of further research Gardener and his colleagues have stated that there could be an addition of another 3 possible intelligences to the initial list of seven (Smith, 2002, 2008). The presence of one kind of intelligence is determined from several perspectives or criteria which were drawn from several fields such as biology, logical reasoning and various psychological factors. With this he concluded that every child whether normal, mentally or physically challenged will have their unique set of intelligences in which they will shine and both teachers and parents will have to employ a broad range of learning methods in order to identify the strengths and weaknesses of a child. Thus with his research on multiple intellige...
3 Pages(750 words)Research Paper

Culture has lots to do with politics. Politicians may loathe culture, but they will never dare rebel against cultural behavior in a region. When Karl Marx observed that “religion is the opium of the masses’” he was only carr...
6 Pages(1500 words)Case Study

Despite the necessity of a highly integrated and converged international reporting system, it s...
15 Pages(3750 words)Research Proposal

A theroretical written paper ( discuss Howard Gardner's intelligence theory. How could the teacher implement the theory to ensure that all pupils needs are addressed

Mostly, this diversity occurs in the area of mathematics. You find that some students comprehend mathematics faster and effortlessly as compared to other students. But does this slow understanding make them failures? Gardner (1991) does not believe so. The approach that the teachers use in teaching these different students is the one that determines what and how they shall comprehend the materials taught.
To this regard, it becomes the prerogative of the teachers to ensure that they employ teaching methods and strategies that are bound to bring positive results. Through the application of some of the concept of multiple intelligence stipulated by Gardner (1991), the teachers could foster an amicable and indulging learning envi...
8 Pages(2000 words)Essay
sponsored ads
Save Your Time for More Important Things
Let us write or edit the essay on your topic "A theroretical written paper ( discuss Howard Gardner's intelligence theory. How could the teacher implement the theory to ensure that all pupils needs are addressed" with a personal 20% discount.
GRAB THE BEST PAPER

Let us find you another Essay on topic A theroretical written paper ( discuss Howard Gardner's intelligence theory. How could the teacher implement the theory to ensure that all pupils needs are addressed for FREE!