Comments (0)
Add to wishlistDelete from wishlist
Cite this document
Summary
This lesson is about teaching sixth grade students how to observe, paint, read and express water paintings. They will be given various pieces of neon color spreading and water color illusions and they will need to study and reflect what they see in them. They will be taught to hone their psychophysical observations on the art pieces…
Download full paperFile format: .doc, available for editing
HIDE THIS PAPERGRAB THE BEST PAPER94.8% of users find it useful 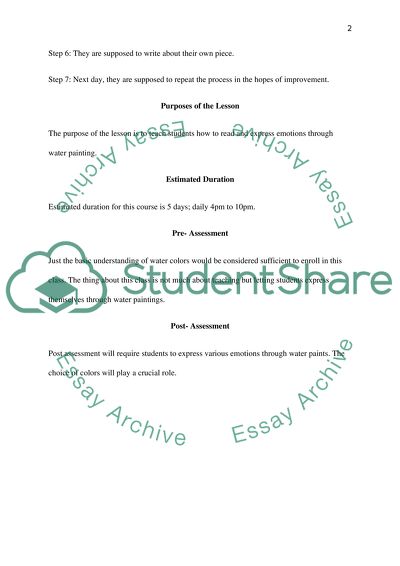 Water Color Painting Lesson Summary This lesson is about teaching sixth grade how to observe, paint, read and express water paintings. They will be given various pieces of neon color spreading and water color illusions and they will need to study and reflect what they see in them. They will be taught to hone their psychophysical observations on the art pieces. Teaching them the two-dot limiting case on how to get into the art projections will the essence of this class. Façade neural model will be explained to them in lecture mode. The basics of print like, symmetry, the abstractness of asymmetry, lower contrast edges, higher contrast edges and finally the perceptual boundaries of vision and reality of water color prints are the fundamentals of this class.
Procedures
The procedures for this class are;
Step 1: Children will sit down on the floor (white coloring sheets on the floor) instead of having a canvas in front of them. (Children will not get tired holding their hands in the air).
Step 2: Asked to brush colors on canvas without any restrictions
Step 3: teacher will go up to each student and tell them specific points about their painting so they could make it better.
Step 4: Let them be. Let them use their imaginations and create whatever pleases them.
Step 5: they will be briefed about specifics of painting later so they would take short notes.
Step 6: They are supposed to write about their own piece.
Step 7: Next day, they are supposed to repeat the process in the hopes of improvement.
Purposes of the Lesson
The purpose of the lesson is to teach students how to read and express emotions through water painting.
Estimated Duration
Estimated duration for this course is 5 days; daily 4pm to 10pm.
Pre- Assessment
Just the basic understanding of water colors would be considered sufficient to enroll in this class. The thing about this class is not much about teaching but letting students express themselves through water paintings.
Post- Assessment
Post assessment will require students to express various emotions through water paints. The choice of colors will play a crucial role.
Reference
Watercolor painting and projects. (2012). Retrieved from http://www.watercolorpaintingandprojects.com/ Read More
Share:
Tags
Cite this document
(“Watercolor Prints Essay Example | Topics and Well Written Essays - 250 words”, n.d.)
Watercolor Prints Essay Example | Topics and Well Written Essays - 250 words. Retrieved from https://studentshare.org/education/1600280-watercolor-prints

CHECK THESE SAMPLES OF Watercolor Prints

... REX BRANDT: CALIFORNIA WATERCOLOR PAINTER Introduction Rex Brandt (1914-2000) was one of the most influential California watercolour artists, whose works are well-known for their unique processes and his distinctive style that combined Cubist abstraction, Abstract Expressionism and Realism (Goss, 2008). Brandt grew up in San Diego and in Riverside. Interested in art from an early age, he adopted a cubist, broad, and splashy style of watercolour painting, and focused mostly on painting San Diego and the beaches of Southern California. As a member of the California Watercolor Society and an eminent leader of California artists in the 1930s and 1940s, his contribution to art and to focusing national attention on California artists...
8 Pages(2000 words)Essay

...?Special Qualities of Japanese Woodblock Prints: Woodblock prints are an integral part of Japanese art and culture in the centuries gone past. In many ways, the techniques of craft and reproduction that were pioneered and mastered by the Japanese were more advanced than what their European contemporaries were able to achieve. Although woodblock prints were in circulation as early as the eighth century A.D., it was only since the 17th century that they reached their peak creative expression. Woodblock prints spanning the entire millennia have served a crucial cultural purpose in Japan, as they were second only to the oral tradition in propagating folklore, history and customs of the people. Not only were the woodblock prints a source...
3 Pages(750 words)Essay

...of the theater. Conclusion The Dock Street Theater still serves as part of Charleston's cultural life because it is part early Georgian playhouse and part preservation of the old Planters Hotel. This therefore means a blend of two historic routes that could stand among one of America's pride. It is in this light that the theater has often featured in watercolor prints of Charleston as the performing arts have been a large part of Charleston Southern Society since the founding of the city. Given that plays are performed here regularly, there is always a flow of both local and international visitors who come here as tourists or to attend events. Such potential for tourist attraction can be seen from the...
4 Pages(1000 words)Essay

...﻿Dox Thrash - Making Prints of His Real Life Abstract In the 1930 and 1940’s newspapers allowed artists to express their feelings to a larger audience, but the United States government used this art as propaganda for entering into World War II. Social realism became a major factor in artists’ work. This movement was a group of individuals that were unhappy with the turn capitalism took after World War I. These artists produced real art illustrating the Depression Era. For the African America community the events portrayed in their art could be anything from poverty to lynching. Soon the government began using the social realism inspired art for their own reasons. Since the art was funded by the government, the art could be used...
8 Pages(2000 words)Research Paper

... Fashion Trend: Prints Guess what’s hot in the fashion world today? PRINTS! MIND-BOGGLING MISMATCHING PRINTS! The fashion gurus have gone wilder with this new trend --- “Head-To-Toe Prints” (Hutchings , par 1). Whether it be floral, stripes, animal, paisley or retro, you name it, it’s definitely IN! It’s not your eyes that’s deceiving you. Yes, ladies are going gaga over the mix-matching of different types of prints. Now, you don’t have to ask your fashion stylist if your floral blouse matches with your animal printed pants because the fashion world has gone crazy with PRINTS. Who would imagine that matching a stripe shirt with a floral skirt means chic? And wearing a polka dot pants with a leopard print blouse is vogue...
1 Pages(250 words)Article

...Fashion Trend: Prints for Aged Women Fashion trends imply the facets of the manifestation and structure of fashion manufactured goods that relate to a meticulous season. These inclinations manifest in the look of fashion products, devised, and produced earlier before delivery to the season. A fashion trend gives perceptions into the technique and color course that prospect fashion items will acquire in their last appearance. Prints fashion trend is more concerned with the trend color than the garment silhouette, because it is at its early phases of the supply sequence. For this reason, as a buyer, one requires to be conscious of the entire range of trend information pertinent to Prints fashion products. Women’s contemporary...
2 Pages(500 words)Article

...and in 1930, his painting, House by the Railroad, was placed among the permanent collections at the Museum of Modern Art. In his lifetime, he created more than 800 paintings, watercolor prints as well as many drawings and illustrations. Most of his works presented New York City architecture, with stark interpretations of American life. “Hopper sought and explored his chosen themes: the tensions between individuals (particularly men and women), the conflict between tradition and progress in both rural and urban settings, and the moods evoked by various times of day.” (Murphy, 2007). Even though most of Hopper’s works were done with oil painting, he also mastered the technique of etching, which brought...
7 Pages(1750 words)Essay

... Etching Artworks This portrait is a perfect example of an imaging that resulted from the process of etching. This can be seen in the nature images that are seen in the portrait. One thing that can be seen in the portrait is the fact that lines that are evident are not precise. This is a common characteristic of portraits that are made through etching. The lack of precise nature is caused by the irregularity of acid biting action. This implies that there is no particular way through which the artists involved in etching can control the regularity of the lines that result from etching. The lines of the frames of the structure in the portraits can be used to illustrate just how irregular lines on artworks resulting from etching can...
1 Pages(250 words)Essay

... Pla One of History’s Greatest Contributors The dictionary typically defines philosophy as “the love of or search for wisdom or knowledge” or “as the theory or logical analysis of the principles underlying conduct, thought, knowledge and the nature of the universe” (Neufeldt, Goralnik, 1994, p. 1015). With such a general definition, one might begin to understand the complexities involved in studying philosophy as it seems to encompass just about all knowledge pursuits. Perhaps part of the confusion in trying to define the term can be found in the early days of the science when it applied almost universally to all avenues of knowledge in ancient Greece. The term itself derives from an ancient Greek word that translates to “love... Pla One...
12 Pages(3000 words)Case Study

The battle has received much criticism because of two important issues—the genocidal nature of the attack and the major lapse of judgment by their commander: the abandonment of Major Elliott. It is, however, the death of Major Elliott and his troops at the Battle of Washita which became the most controversial, at least within the regiment itself. It caused deep...

The following fact; high taxing raises revenue and strengthens the economy, demonstrates that a country’s budget will balance when tax is imposed on ‘soft drinks and junk foods’. Smith states that taxes imposed to raise revenue that the government can use for beneficial governmental projects such as the providence of health insurance (Smith, 648). The low-income populace in society will benefit in a number of ways such as reducing the consumption rate of junk foods and drinks (Mechanic, 110). Thus, saving substantial capital, that can be spent in other significant fields. Smith further argues that revenue can be used to prevent diseases such as obesity, and receive infinite services, teachings, and services from...
6 Pages(1500 words)Coursework
sponsored ads
Save Your Time for More Important Things
Let us write or edit the essay on your topic "Watercolor Prints" with a personal 20% discount.
GRAB THE BEST PAPER

Let us find you another Essay on topic Watercolor Prints for FREE!