Comments (0)
Add to wishlistDelete from wishlist
Cite this document
Summary
It is the struggle by the aborigines in colonial nations like Canada, Australia, New Zealand, and the U.S for the right to self-determination. Admittedly, many Canadians have the…
Download full paperFile format: .doc, available for editing
HIDE THIS PAPERGRAB THE BEST PAPER91.1% of users find it useful 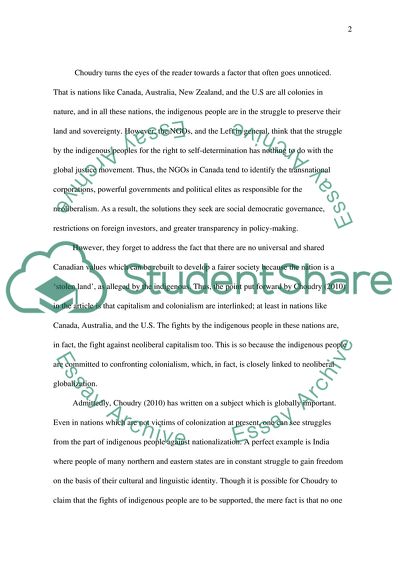 Extract of sample "Debunking the myth of NGOs (non-government organizations)"

Article Review "Whats Left? Canadas global justice movement and the colonial amnesia" Aziz Choudry has introduceda matter that has global repercussions and is widely discussed. It is the struggle by the aborigines in colonial nations like Canada, Australia, New Zealand, and the U.S for the right to self-determination. Admittedly, many Canadians have the latent sense that all is not well with relations between Canadian government and its indigenous peoples, especially when it comes to the latter’s claim for self-determination. Now, in support of these sensibilities, Choudry (2010) reveals in his article “What’s Left? Canada’s global justice movement and colonial amnesia” the role of NGOs in Canada, even the Left-leaning ones, is in acknowledging and supporting the indigenous struggles.
The NGOs have failed to acknowledge the link between colonialism and neoliberalism though they have acknowledged the latter as their enemy. According to Choudry, the Left-leaning NGOs in Canada do not acknowledge or support the struggles by indigenous people against neoliberalism. In order to substantiate this claim, Choudry points out that the issues of Indigenous people in Canada gained international attention as is evident from the fact that the 2008 UN Committee on the Elimination of Discrimination against Women urged Canada to conduct special inquiry into the atrocities against the indigenous women in Canada. Still, it is surprising to note that none of the so-called Left-leaning NGOs showed any interest or supported the struggles of the indigenous people.
The reason for this is found by Choudry in the fact that even the Left NGOs are unable to acknowledge the existing element of colonialism in Canada, and hence, they adopt a ‘White progressive economic nationalist’ position. Thus, the NGOs fail to acknowledge the negative consequences of neoliberalism which surrounds them in various forms. While promoting baseless claims of nation-building, they fail to look into, or understand, the importance of the indigenous struggles.
Choudry turns the eyes of the reader towards a factor that often goes unnoticed. That is nations like Canada, Australia, New Zealand, and the U.S are all colonies in nature, and in all these nations, the indigenous people are in the struggle to preserve their land and sovereignty. However, the NGOs, and the Left in general, think that the struggle by the indigenous peoples for the right to self-determination has nothing to do with the global justice movement. Thus, the NGOs in Canada tend to identify the transnational corporations, powerful governments and political elites as responsible for the neoliberalism. As a result, the solutions they seek are social democratic governance, restrictions on foreign investors, and greater transparency in policy-making.
However, they forget to address the fact that there are no universal and shared Canadian values which can be rebuilt to develop a fairer society because the nation is a ‘stolen land’, as alleged by the indigenous. Thus, the point put forward by Choudry (2010) in the article is that capitalism and colonialism are interlinked; at least in nations like Canada, Australia, and the U.S. The fights by the indigenous people in these nations are, in fact, the fight against neoliberal capitalism too. This is so because the indigenous people are committed to confronting colonialism, which, in fact, is closely linked to neoliberal globalization.
Admittedly, Choudry (2010) has written on a subject which is globally important. Even in nations which are not victims of colonization at present, one can see struggles from the part of indigenous people against nationalization. A perfect example is India where people of many northern and eastern states are in constant struggle to gain freedom on the basis of their cultural and linguistic identity. Though it is possible for Choudry to claim that the fights of indigenous people are to be supported, the mere fact is that no one likes to surrender his or her freedom. People in the civilized world have compromised their personal freedom to make a nation or a society. So, the indigenous people do not deserve any special consideration regarding self-determination.
In total, Choudry (2010) points out the fact that the modern neoliberal globalization is just another form of colonization. Though the indigenous people recognize the same and fight against it, the Left-leaning NGOs have miserably failed to identify the relation and to react in time. As a result, even these NGOs hold the false belief that nation-building is the way to stop neo-liberalism. However, the scope of this claim is limited to such nations which are still colonized, though the indigenous in other nations too are in constant conflict with the national governments.
References
Choudry, A. (2010). "Whats Left? Canadas global justice movement and the colonial amnesia" . Sage Journals: Race and Class, 52 (1): 97-102. Read More
Share:
Tags
Cite this document
(“Debunking the myth of NGOs (non-government organizations) Essay”, n.d.)
Debunking the myth of NGOs (non-government organizations) Essay. Retrieved from https://studentshare.org/education/1598497-debunking-the-myth-of-ngos-non-government-organizations

“Debunking the Myth of NGOs (non-Government Organizations) Essay”, n.d. https://studentshare.org/education/1598497-debunking-the-myth-of-ngos-non-government-organizations.
Comments (0)
Click to create a comment or rate a document

The Organizations Requirement for Employees

The Employment Rights Act also provides for redundancy as one of the fair reasons for dismissal. Therefore Border Builders has the right to legally dismiss its employees on grounds of redundancy and it is possible that Margaret’s dismissal may qualify as a legal dismissal under the Employment Rights Act.
The test for redundancy was first set out by the Courts in the case of Safeway v Burrell3, wherein a three-stage procedure was set out as follows: (a) was the employee dismissed? (b) whether the organization’s requirement for employees to carry out such work has diminished? and (c) whether such diminution of work is the reason for dismissal? Therefore, this case laid out a simple factual analysis as the correct ap...
11 Pages(2750 words)Case Study

Even so, we particularly think of scientists as the ones responsible for the destruction caused during World War II. In spite of the uses of atomic physics in improving our daily life most usually associate it with Hiroshima and Nagasaki and the atomic bombings that changed the way, people think about science.
Rhodes describes that the development of atomic physics began with Rutherford’s experiment on gold sheets which lead to the idea of what an atom is like. This model of the atom was not perfect but even so, it did provide a basic idea about the arrangement of sub-atomic particles within an atom. Rutherford’s model was supported by the discovery of the neutron by Chadwick. This model was further improved later...
7 Pages(1750 words)Essay

The work of John Rawls mainly concentrates on the social institutions and virtues of the society namely, social justice, political liberty, and equality. In his work, Rawls’ has called justice as the “basic structure of the society” (Rawls, 1999, p. 7). Each individual enjoys a basic level of...
7 Pages(1750 words)Essay

One of the major policies undertaken by the British Government in the last two years was fiscal decentralization. The government has taken steps to ensure that improvement is made in the country’s...
7 Pages(1750 words)Coursework
sponsored ads
Save Your Time for More Important Things
Let us write or edit the essay on your topic "Debunking the myth of NGOs (non-government organizations)" with a personal 20% discount.
GRAB THE BEST PAPER

Let us find you another Essay on topic Debunking the myth of NGOs (non-government organizations) for FREE!