Comments (0)
Add to wishlistDelete from wishlist
Cite this document
Summary
It is relating speech through sequences of letters to capture language sounds. Visual spelling relates speech and writing to provide speech, rules of spelling start in writing to letter sequences of…
Download full paperFile format: .doc, available for editing
HIDE THIS PAPERGRAB THE BEST PAPER91.7% of users find it useful 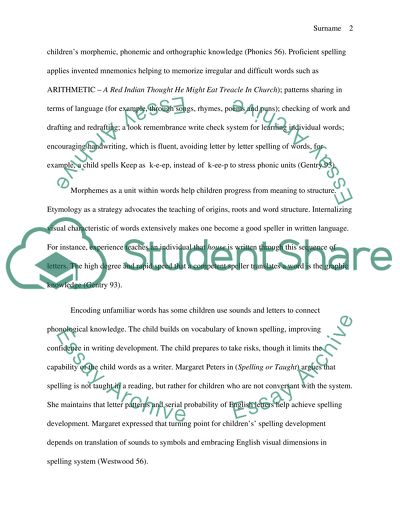 Key Issues of Primary education spelling Spelling is a reproduction of word shapes stored in the mind into letterforms. It is relating speech through sequences of letters to capture language sounds. Visual spelling relates speech and writing to provide speech, rules of spelling start in writing to letter sequences of pronunciation. It is recording remembered letter sequences, word shapes or heard sounds in graphic form. Spelling is relating medium of sound into graphic substance. This paper discusses the learning, teaching, understanding and spelling development in primary education.
Complex changes continue to abolish existing economic framings, social, cultural; and arrival of new local, intermediary and global levels. The inevitable global finance, culture, shifts of new information in industry and extreme transport speed has transformed many things. For a century, education has stayed put and met the needs of its society as part of the change. Spelling is a linguistic bit of practice issuing control, authority and conformity with sharp focus. It represents resources used to make meaning. System in spelling seems to be a subject of constraints convention, and yet one creating creativity in children (Torbe 34).
Natural learning method is an instructional approach to spelling that arrests spelling development contrary to ineffective methods. Constrains of literacy usually result when there is spelling development is compromised. Acquiring spelling knowledge, for instance reinforces children’s morphemic, phonemic and orthographic knowledge (Phonics 56). Proficient spelling applies invented mnemonics helping to memorize irregular and difficult words such as ARITHMETIC – A Red Indian Thought He Might Eat Treacle In Church); patterns sharing in terms of language (for example, through songs, rhymes, poems and puns); checking of work and drafting and redrafting; a look remembrance write check system for learning individual words; encouraging handwriting, which is fluent, avoiding letter by letter spelling of words, for example, a child spells Keep as k-e-ep, instead of k-ee-p to stress phonic units (Gentry 93).
Morphemes as a unit within words help children progress from meaning to structure. Etymology as a strategy advocates the teaching of origins, roots and word structure. Internalizing visual characteristic of words extensively makes one become a good speller in written language. For instance, experience teaches an individual that house is written through this sequence of letters. The high degree and rapid speed that a competent speller translates a word is the graphic knowledge (Gentry 93).
Encoding unfamiliar words has some children use sounds and letters to connect phonological knowledge. The child builds on vocabulary of known spelling, improving confidence in writing development. The child prepares to take risks, though it limits the capability of the child words as a writer. Margaret Peters in (Spelling or Taught) argues that spelling is not taught in a reading, but rather for children who are not conversant with the system. She maintains that letter patterns and serial probability of English letters help achieve spelling development. Margaret expressed that turning point for children’s’ spelling development depends on translation of sounds to symbols and embracing English visual dimensions in spelling system (Westwood 56).
According to Gentry, children’s development involve five stages; phonetic where words a spelled the sounds e.g. ATE = eighty, EGL=eagle, Precommunicative. Letters of the alphabet are without letter-sound correspondence. Example: RTAT=eighty; OPSPO=eagle. Transitional has apparent visual memory of spelling patterns. The spellings have conventions of English orthography of vowel digraph patterns, vowels in syllables and well spelled inflectional endings. Semiphonetic has some sounds represented in letters. Example; A =eighty; E=eagle (Sterlin & Cliff 15).
Works Cited
Gentry R. (1987) Spel… is a four letter word, Leamington Spa: Scholastic. London: Routledge (first published 2001) Ch. 13. Print
Phonics: Practice, Research and Policy. London: UKLA / PCP. Print
Sterling C. M, Cliff R. Psychology, Spelling and Education. Clevedon: Philadelphia, 2007. Print.
Torbe M. Teaching and Learning Spelling. New York: Cassell P L C, 1996. Print
Westwood P. S. Spelling: Approaches to Teaching and Assessment. Camberwell, Victoria: ACER Press, 2005. Print. Read More
Share:
Tags
Cite this document
(“Key issues involved in the primary school teaching and learning of Essay”, n.d.)
Key issues involved in the primary school teaching and learning of Essay. Retrieved from https://studentshare.org/education/1593058-key-issues-involved-in-the-primary-school-teaching-and-learning-of-spelling

“Key Issues Involved in the Primary School Teaching and Learning of Essay”, n.d. https://studentshare.org/education/1593058-key-issues-involved-in-the-primary-school-teaching-and-learning-of-spelling.
Comments (0)
Click to create a comment or rate a document

The Key to Motivating Centers' Employees

The reasons for working are as individual as the person. But, we all work because we obtain something that we need from work. That something obtained from work impacts morale, employee motivation, and the quality of life. To create positive employee motivation, treat employees as if they matter because of employees' matter. Whatever the employee’s personal reason is for working, the bottom line, however, is that almost everyone works for money? Whatever you call it: compensation, salary, bonuses, benefits or remuneration, money pays the bills. Money provides housing, gives children clothing and food, sends teens to college, and allows leisure activities, and eventually, retirement. To underplay the importance of money and be...
7 Pages(1750 words)Case Study

Fundamental rights had been traced to several ancient documents which date signify that even in those ancient eras fundamental rights had already been practiced and recognized and that the concept was alive and respect for such rights existed thousands of years ago. The Cyrus Cylinder which can be found in the British Museum in London shows that during 539 BC, Cyrus the Great of Persia believed in the fundamental human rights of his own citizens as well as captive citizens of Babylonia which he conquered in 539 BC. The Cyrus Cylinder was actually Cyrus’ declaration of reforms and described how Cyrus repatriated displaced peoples such as the Jews who were deported and exiled by the Babylonian king Nebuchadnezzar in 6th centur...
66 Pages(16500 words)Dissertation

The new techniques to manage the operations and the use of new machinery which reduces the labor cost are difficult to be adopted due to the existing managed workforce and working environment. The hotel industry has now reached a highly competitive stage and all restaurants are adopting the branded restaurant concept in order to meet the requirements of continuous innovations and creative approach (Casper, 1995). It has also been observed during the research that restaurants and famous hotels are working in collaboration to maximize their returns, for example, the partnership of Marriott and Pizza Hut, Holiday Inn and TGI Friday’s etc (Boone, 1997). This paper would further discuss the aspects which play a vital role in the...
6 Pages(1500 words)Coursework

The very first problem with the Incentive System was the dismissal of 10% of employees from all the departments at Rainbarrel. As a result, Rainbarrel also lost some of its best employees that were employed and servicing in top-performing departments. Most of the workers that were laid off were of low managem...

Mostly, their foot temperature is taken, because heating (high foot temperature) may result in diabetic foot ulcer. The urine test is of two different types: (i) Microalbuminuria Test and (ii) Hyperglycemia Test. The purpose of the Microalbuminuria Test is to determine if the blood vessels to the patients’ kidneys have been damaged. If damaged, the test would be positive. Similarly, the hyperglycemia test is meant to detect the blood sugar level: if the level is high, this signifies that much Ketone, a by-product of the fat burning in the human body with little or absence of insulin. The hyperglycemia test is encouraging if its result is low. The diagnostic tests highlighted above constitute vital parts of the daily medical...
6 Pages(1500 words)Assignment
sponsored ads
Save Your Time for More Important Things
Let us write or edit the essay on your topic "Key issues involved in the primary school teaching and learning of spelling" with a personal 20% discount.
GRAB THE BEST PAPER

Let us find you another Essay on topic Key issues involved in the primary school teaching and learning of spelling for FREE!