Comments (0)
Add to wishlistDelete from wishlist
Cite this document
Summary
An author of the essay "Molding a Career in International Law" would reflectively analyze the high education opportunity in accordance with personal skills and interests. The writer emphasizes the importance of former achievements and solid academic base in personal development…
Download full paperFile format: .doc, available for editing
HIDE THIS PAPERGRAB THE BEST PAPER96.7% of users find it useful 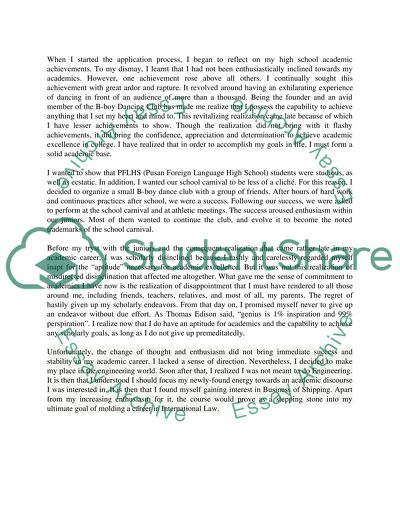 Extract of sample "Molding a Career in International Law"

When I started the application process, I began to reflect on my high school academic achievements. To my dismay, I learnt that I had not been enthusiastically inclined towards my academics. However, one achievement rose above all others. I continually sought this achievement with great ardor and rapture. It revolved around having an exhilarating experience of dancing in front of an audience of more than a thousand. Being the founder and an avid member of the B-boy Dancing Club has made me realize that I possess the capability to achieve anything that I set my heart and mind to. This revitalizing realization came late because of which I have lesser achievements to show. Though the realization did not bring with it flashy achievements, it did bring the confidence, appreciation and determination to achieve academic excellence in college. I have realized that in order to accomplish my goals in life, I must form a solid academic base.
I wanted to show that PFLHS (Pusan Foreign Language High School) students were studious, as well as ecstatic. In addition, I wanted our school carnival to be less of a cliché. For this reason, I decided to organize a small B-boy dance club with a group of friends. After hours of hard work and continuous practices after school, we were a success. Following our success, we were asked to perform at the school carnival and at athletic meetings. The success aroused enthusiasm within our juniors. Most of them wanted to continue the club, and evolve it to become the noted trademarks of the school carnival.
Before my tryst with the juniors and the consequent realization that came rather late in my academic career, I was scholarly disinclined because I rashly and carelessly regarded myself inapt for the “aptitude” necessary for academic excellence. But it was not this realization of misdirected disinclination that affected me altogether. What gave me the sense of commitment to academics I have now is the realization of disappointment that I must have rendered to all those around me, including friends, teachers, relatives, and most of all, my parents. The regret of hastily given up my scholarly endeavors. From that day on, I promised myself never to give up an endeavor without due effort. As Thomas Edison said, “genius is 1% inspiration and 99% perspiration”. I realize now that I do have an aptitude for academics and the capability to achieve any scholarly goals, as long as I do not give up premeditatedly.
Unfortunately, the change of thought and enthusiasm did not bring immediate success and stability in my academic career. I lacked a sense of direction. Nevertheless, I decided to make my place in the engineering world. Soon after that, I realized I was not meant to do Engineering. It is then that I understood I should focus my newly-found energy towards an academic discourse I was interested in. It is then that I found myself gaining interest in Business of Shipping. Apart from my increasing enthusiasm for it, the course would prove as a stepping stone into my ultimate goal of molding a career in International Law. Read More
Share:
Tags
Cite this document
(“Molding a Career in International Law Admission/Application Essay - 10”, n.d.)
Molding a Career in International Law Admission/Application Essay - 10. Retrieved from https://studentshare.org/education/1586069-admission-essay

“Molding a Career in International Law Admission/Application Essay - 10”, n.d. https://studentshare.org/education/1586069-admission-essay.
Comments (0)
Click to create a comment or rate a document

CHECK THESE SAMPLES OF Molding a Career in International Law

The attempts by foreign investments to penetrate China’s market have proven futile in the past especially due to the conservative nature of the inhabitants. China is a strict country when it comes to culture and cultural interaction. For ex...
7 Pages(1750 words)Coursework

Justine could either claim under “like work,” “work rated as equivalent,” or “work of equal value.” A claim under the “like work” provision of the Equal Pay Act 1970 is laid down in s 1(2...
9 Pages(2250 words)Case Study
sponsored ads
Save Your Time for More Important Things
Let us write or edit the admission/application essay on your topic "Molding a Career in International Law" with a personal 20% discount.
GRAB THE BEST PAPER

Let us find you another Admission/Application Essay on topic Molding a Career in International Law for FREE!