Comments (0)
Add to wishlistDelete from wishlist
Cite this document
Summary
This paper "Personality Analysis" presents how the group project allows us to learn and progress throughout the course. Personality assessments and learning style tests give an idea of how personality and learning style affects abilities as a team member…
Download full paperFile format: .doc, available for editing
HIDE THIS PAPERGRAB THE BEST PAPER93.8% of users find it useful 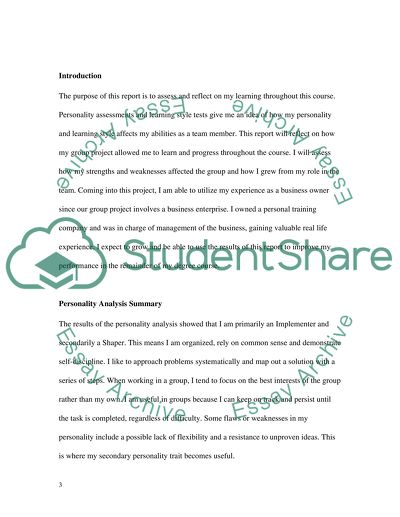 Download file to see previous pages I owned a personal training company and was in charge of the management of the business, gaining valuable real-life experience. I expect to grow and be able to use the results of this report to improve my performance in the remainder of my degree course.

The results of the personality analysis showed that I am primarily an Implementer and secondarily a Shaper. This means I am organized, rely on common sense and demonstrate self-discipline. I like to approach problems systematically and map out a solution with a series of steps. When working in a group, I tend to focus on the best interests of the group rather than my own. I am useful in groups because I can keep on track and persist until the task is completed, regardless of difficulty. Some flaws or weaknesses in my personality include a possible lack of flexibility and resistance to unproven ideas. This is where my secondary personality trait becomes useful.
As a shaper, I am outgoing and dynamic. I am highly motivated and have ample energy a desire for achievement. I often push others to work hard and find ways to overcome obstacles. I can handle confrontation and sometimes find it useful. However, my personality as a Shaper will help me deal with high pressure, stressful situations, and deadlines [Appendix A].

CHECK THESE SAMPLES OF Personality Analysis

Perhaps one of the most conspicuous aspects of CNN is that it has an excellent contact network and reporters on the spo...
8 Pages(2000 words)Case Study
sponsored ads
Save Your Time for More Important Things
Let us write or edit the coursework on your topic "Personality Analysis" with a personal 20% discount.
GRAB THE BEST PAPER

Let us find you another Coursework on topic Personality Analysis for FREE!