Comments (0)
Add to wishlistDelete from wishlist
Cite this document
Summary
This research paper seeks to explore whether the "free secondary education" in developing countries.in this case Kenya,is realistic or a mere rhetoric in the face of the political, gender and economic hurdles being faced by the country.Currently Kenya like most of its East African counterparts,barely emerging from the shackles of the colonial era and moving towards a transition of democratic regimes ,has signed the UN Convention on the Rights of the Child and the African Charter on the Rights and Welfare of the Child, committing itself to the basic education of its juveniles.According to Hellen Obande the free primary education policy was introduced in the January 2003 but she has commented …
Download full paperFile format: .doc, available for editing
HIDE THIS PAPERGRAB THE BEST PAPER96.9% of users find it useful 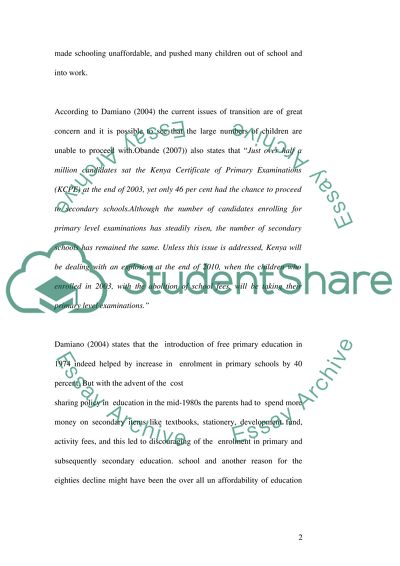 Download file to see previous pages ade schooling unaffordable, and pushed many children out of school and into work.
According to Damiano (2004) the current issues of transition are of great concern and it is possible to see that the large numbers of children are unable to proceed with.Obande (2007)) also states that "Just over half a million candidates sat the Kenya Certificate of Primary Examinations (KCPE) at the end of 2003, yet only 46 per cent had the chance to proceed to secondary schools.Although the number of candidates enrolling for primary level examinations has steadily risen, the number of secondary schools has remained the same. Unless this issue is addressed, Kenya will be dealing with an explosion at the end of 2010, when the children who enrolled in 2003, with the abolition of school fees, will be taking their primary level examinations."
Damiano (2004) states that the introduction of free primary education in 1974 indeed helped by increase in enrolment in primary schools by 40 percent. But with the advent of the cost
sharing policy in education in the mid-1980s the parents had to spend more money on secondary items like textbooks, stationery, development fund, activity fees, and this led to discouraging of the enrolment in primary and subsequently secondary education. school and another reason for the eighties decline might have been the over all un affordability of education and this meant that despite golden promises by the post colonial government the primary education was not really free(Damiano 2004).
However things were improving by the new millennium and in December 2002 primary and secondary education was wholly freed and this has resulted in a big enrolment increase of about 1,500,000 additional students.(Damiano 2004).The main problem which still haunts the free educational initiative is the lack of money,gender bias and poor economic conditions as described by Damiano (2004) citing , Uusitalo (1999) and Levin and Plug (1999) who have blamed the family background variables as instruments hindering free secondary education and according to Angrist and Krueger (1991) and Harmon and Walker (1995) as cited by Damiano (2004) demographic statistics are also responsible for these problems.
Moses W (2006) offers a more historical perspective as he states that the post colonial independence and the end of racism in the segregated school system which suppressed the Kenyan natives ,the new democratic government has had a hard time catching uo with the challenges of the , shortage of skilled labour and rampant poverty and consequently the Government devoted a large ...Download file to see next pagesRead More
Share:
Tags
Cite this document
(“Free Secondary Education in Kenya Case Study Example | Topics and Well Written Essays - 3000 words”, n.d.)
Free Secondary Education in Kenya Case Study Example | Topics and Well Written Essays - 3000 words. Retrieved from https://studentshare.org/education/1515295-free-secondary-education-in-kenya

CHECK THESE SAMPLES OF Free Secondary Education in Kenya

...Management Theory and Practice in the early childhood education industry This Report applies management theory into practice in the early childhood industry, especially in the context of women leaders. Management issues play a significant role in the academic sector, because early childhood professionals need higher levels of motivation in order to avoid burnout . As pointed out in a study by Osgood and Halsall (2007) where they carried out research to examine the position of women in leadership or management positions, a “glass ceiling” exists for women in the academic setting, which could significantly impair motivation. Since many of the individuals employed in the early education sector are women, addressing this issue is even more...
6 Pages(1500 words)Coursework
sponsored ads
Save Your Time for More Important Things
Let us write or edit the case study on your topic "Free Secondary Education in Kenya" with a personal 20% discount.
GRAB THE BEST PAPER

Let us find you another Case Study on topic Free Secondary Education in Kenya for FREE!