Comments (0)
Add to wishlistDelete from wishlist
Cite this document
Summary
This paper examines a sequence of four lesson plans used with the same class in accordance with the system of curricular differentiation with reference to their theoretical suppositions, and evaluates how effective they may be in terms of practical utility. …
Download full paperFile format: .doc, available for editing
HIDE THIS PAPERGRAB THE BEST PAPER92.9% of users find it useful 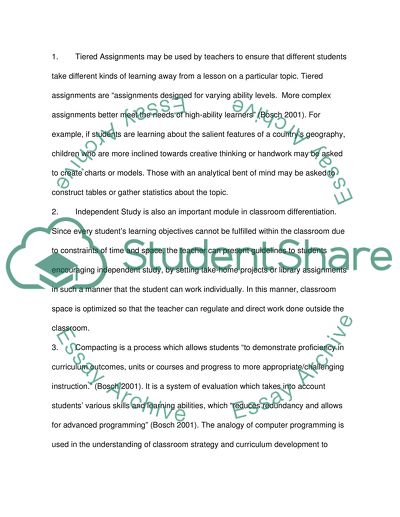 Download file to see previous pages ed within the classroom due to constraints of time and space, the teacher can present guidelines to students encouraging independent study, by setting take-home projects or library assignments in such a manner that the student can work individually. In this manner, classroom space is optimized so that the teacher can regulate and direct work done outside the classroom.
3. Compacting is a process which allows students "to demonstrate proficiency in curriculum outcomes, units or courses and progress to more appropriate/challenging instruction." (Bosch 2001). It is a system of evaluation which takes into account students' various skills and learning abilities, which "reduces redundancy and allows for advanced programming" (Bosch 2001). The analogy of computer programming is used in the understanding of classroom strategy and curriculum development to demonstrate that differentiation procedures have a well-defined goal and flowchart to direct the process of imparting learning.
The process of differentiation may be differentiated from the federal government's initiation of the No Child Left Behind program, which is designed to ensure that the learning needs of every student are met during the process of pedagogical instruction. In his Foreword to the federal document profiling the designs and outcomes of the program, President Bush has said:
The quality of our public schools directly affects us all - as parents, as students, and as citizens. Yet too many children in America are segregated by low expectations, illiteracy, and self-doubt. In a constantly changing world that is demanding increasingly complex skills from its workforce, children are literally being left behind. (Bush 2001)
Thus President Bush links the process of classroom instruction directly to the overall...
As the discussion declares a differentiated classroom is one in which the teacher focuses on optimizing the efficiency of each student’s strengths, thereby prioritizing different learning skills with each student, depending on his or her individual requirements. Bosch has observed that “in a differentiated classroom, teachers differentiate content, process and product according to a student's readiness, interest and learning profile.” Learning profiles are therefore constructed for each student on the basis of his or her individual needs, and the student’s readiness to learn and interest in the learning process are also factored in to the development of the curriculum, thus ensuring that the learning process is made holistic.
According to the report findings one of the most seminal contributors to the filed of curriculum and classroom differentiation had been Carol Ann Tomlinson. She writes: “squeezing students into a one-size-fits-all curriculum has left many behind. By differentiating your instruction, you can meet the needs of every child. She implies, therefore, that the curriculums that do not differentiate among learning levels create a constricting mould that propagates a “one-size-fits-all” design for the curriculum, which causes many students to be left behind in the process of education. Cooper presents an invigorating account of a practical lesson he had with a class, and interprets the practical aspects of differentiation in terms of Tomlinson’s principles. ...Download file to see next pagesRead More
Share:
Tags
Cite this document
(“Analysis of Sequential Lesson Plans Dissertation”, n.d.)
Retrieved from https://studentshare.org/education/1513923-sequential-lesson-plans

CHECK THESE SAMPLES OF Analysis of Sequential Lesson Plans

For instance, the housing problems are growing acute in regions occupied by the minority group of Asian Pakistanis. There are, however, no similar problems faced in the locations occupied by the majority white population or other minority Asians of Indian origin or other minority groups.
This may mean either the council authorities in these areas are deliberately sidelining Asian Pakistani groups as they are from the lower level of income group or the authorities face resource crunch and the said group is in no position to alleviate the problem faced by the local authorities (The Housing Needs of Black &Minority Ethnic (BME) Communities in Hyndburn).
Britain is among the leaders in technologically advanced countries...
6 Pages(1500 words)Assignment

Since antiquity, education remained a major component of human societies; however, until a few decades ago, it existed in the society in its traditional and conventional form that involved one-to-one interaction of teachers with their students in classrooms. For a few years, educators and scholars have witnessed rapid advancements in the field of information and technology that have altered almost every sector of society in a rapid manner, and so the education sector as well. In such advancements, the internet has now become one of the most popular platforms for students, teachers, businesspersons, and individuals from every sector to acquire education and information within a few clicks and minutes. In other words, the availabili...
7 Pages(1750 words)Article

Perhaps one of the most conspicuous aspects of CNN is that it has an excellent contact network and reporters on the spo...
8 Pages(2000 words)Case Study
sponsored ads
Save Your Time for More Important Things
Let us write or edit the dissertation on your topic "Analysis of Sequential Lesson Plans" with a personal 20% discount.
GRAB THE BEST PAPER

Let us find you another Dissertation on topic Analysis of Sequential Lesson Plans for FREE!