Comments (0)
Add to wishlist Delete from wishlist
Cite this document
Summary
Coarticulation: Coarticulation is what that ensures the smooth production of sounds. One-fifth of a second is taken for the production of a syllable. While we speak, our tongue, lips and jaw move rapidly. Our brain coordinates these movements in a way that, the movement needed to produce adjacent vowels and consonants is produced simultaneously…
Download full paper File format: .doc, available for editing
HIDE THIS PAPERGRAB THE BEST PAPER92.2% of users find it useful 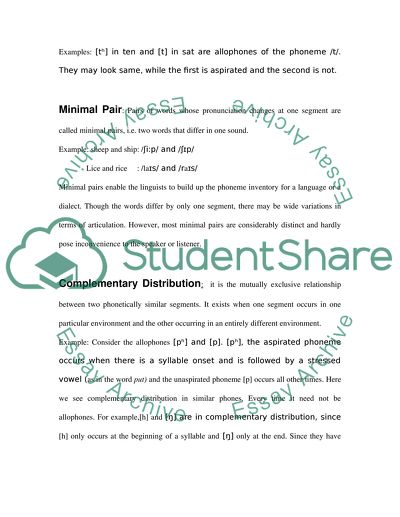 Download file to see previous pages And when producing pp, the lips will be stretched to produce y. The whole word is uttered in half a second.
Elision: Elision is the loss of a phoneme. I.e. the omission of sounds (vowel/consonant/syllable), so that the speaker can simplify the pronunciation. This usually occurs in a fast speech and is normally unintentional.
Allophone: Allophone is a phonetic variant of a phoneme in a particular language. I.e. it is one of the several speech sounds belonging to the same phoneme. A change in allophone does not alter the meaning, but rather makes the word sound non-native.
Minimal pairs enable the linguists to build up the phoneme inventory for a language or a dialect. Though the words differ by only one segment, there may be wide variations in terms of articulation. However, most minimal pairs are considerably distinct and hardly pose inconvenience to the speaker or listener.
Complementary Distribution: it is the mutually exclusive relationship between two phonetically similar segments. It exists when one segment occurs in one particular environment and the other occurring in an entirely different environment.
Example: Consider the allophones [p'] and [p]. ...
Example: Consider the allophones [p'] and [p]. [p'], the aspirated phoneme occurs when there is a syllable onset and is followed by a stressed vowel (as in the word put) and the unaspirated phoneme [p] occurs all other times. Here we see complementary distribution in similar phones. Every time it need not be allophones. For example,[h] and ['] are in complementary distribution, since [h] only occurs at the beginning of a syllable and ['] only at the end. Since they have hardly anything in common in phonetic terms, they are better considered as separate phonemes.
Phonological conditioning and conditioning factors:
Consider the words- cats, dogs, judges. The final sounds- /s/, /z/, /s/ occur after the sounds /t/, /g/ and /'/, respectively. When the distribution of the various allomorphs can be stated in terms of their phonemic environments, the allomorphs are said to be phonologically conditioned. Phonological conditioning is the most general and productive kind of conditioning of morphemic variants in languages.
Phonemic overlapping:
Biuniqueness: It is a principle which provides a one-to-one correspondence between phonemic and phonetic levels of analysis. A phonemic description is said to be biunique if phonemes and allophones are unambiguously mapped on to each other.
Example: send and sent pronounced as /sent/ and seed and seat pronounced as /si:t/.
Neutralization: phonemes that are contrastive in certain environments may not be so in all environments. In those environments where they do not contrast, the contrast is said to be neutralized.
Example: consider the word sum: /s'm/. In another word, plumber: /pl'mb'/, since /m/ is followed by a plosive sound /b/, the contrast is lost.
Archiphoneme: This is an abstract phonological ...Download file to see next pages Read More
Share:
Tags
Cite this document
(“Phonology Case Study Example | Topics and Well Written Essays - 1000 words”, n.d.)
Phonology Case Study Example | Topics and Well Written Essays - 1000 words. Retrieved from https://studentshare.org/education/1509570-phonology

CHECK THESE SAMPLES OF Phonology

Report in phonology and pronunciation

...which may make them add extra vowel to create spilit for split. Other factors that contribute to difficulties in learning English language include word stress and swallowing or elision of sounds (Pennington 1996). Similarly, other factors include age, experience and attitude of learners, learning environment, and even cultural background. References Al-Ani, S. H., 1970. Arabic Phonology. An accoustical and physiological investigation. Paris: The Hague. Amer, W. M., 2010. An Investigation into the difference between English and Arabic Consonant and Vowel Sounds: A Constrastive Study with Pedagogical Implications, Palestine: Islamic University of Gaza. Kopczynksi, A., 1993. Consonants of Arabic and English. Papers and Studies in...
4 Pages (1000 words) Essay

Phonology and the Teaching of Pronunciation

...Phonology and the Teaching of Pronunciation Introduction Many people are complaining that English people talk very rapidly (Roach, 2004 Steele,2005). It is because of the fact that speech is a continuous stream of sounds without specific constraints between them (Steele, 2005). This speech is called connected speech where a natural, smooth-flowing manner of speaking is used. The different features of connected speech may explain the differences between written English and spoken English which many people get surprised with. But in reality, people do not really speak in separate words for words are usually spoken in logical connected groups of words. In English, most connected speech processes are unimportant when distinguishing between...
18 Pages (4500 words) Essay

... Jordanian Arabic Phonology and Morphology Introduction This paper makes an attempt to compare two languages- Jordanian Arabic and English- from two different linguistic perspectives: morphological and phonological. These languages belong to two different families: English to the family of Indo-European languages, and Jordanian Arabic is a dialect of Arabic- a Semitic language. Some of the differences- both structural and representational- have been looked at in the two sections that follow, as well as some similarities and common features that perhaps signify the universal elements in the deep structure of these languages. Phonology The first of the fundamental differences between the phonetics of Jordanian Arabic and English...
4 Pages (1000 words) Essay

... theory, phonetics and phonological theory to propose a new model of sound patterns, which moves away from some of the assumptions of the previous synchronistic approach. In doing so Blevins’ evolutionary model undertakes a detailed examination of variations in sound patterns and sound changes over a period of 7,000 to 8,000 years and uses this time period to address the similarities between genetically unrelated languages (Blevins 1). Sole et al posit that Blevins’ evolutionary phonology paradigm for phonetics is: “One of multiple mechanisms leading to regular sound change and regular sound patterns. Within evolutionary phonology, as in traditional neogrammarian models, variability along the hyper-to-hypoarticulation continuum provides...
39 Pages (9750 words) Essay

The Phonology and Semantics of the English Language

... patterns in different languages, or within a language, different patterns of sounds of an alphabet in different positions in words etc. Phonetics is the base for phonological analysis. Some linguistics include phonetic within the study of phonology. Phonology studies sounds at a particular stage in the development of the language to determine the sound patterns that can occur (Phonology, 2011). International Phonetic Alphabet (IPA) is an alphabetic system of phonetic notation, primarily based on the Latin alphabet. International Phonetic Association devised it as a standardized representation of the sounds of spoken language i.e. a system to transcribe the sounds of speech, independent of any particular language and valid for all...
8 Pages (2000 words) Assignment

..., such as intonation, are not easily identifiable using the basic units of vowels and consonants, or phonemes. Matthews goes on to explain this in his textbook definition of the segment: “hence especially in the analysis of sound systems, where consonants and vowels are distinguished as the topic of segmental phonology from suprasegmental tones or units of intonation” (Matthews, 2007, p. 359). This shows that segments do not adequately represent some of the features of speech and that additional markers are needed. In the case of intonation, for example, diacritical marks are added to the phonetic script to show the overall shape of a whole utterance. In everyday written texts punctuation and bold or italic type are used to indicate...
12 Pages (3000 words) Essay

...﻿The Phonemic Problems: Applied Phonology The phonemic problems that Spanish speakers would face in learning English: Since there are more consonants in the English language than in Spanish and that the letters /b/ and /v/ have relatively the same pronunciation in Spanish and stops in the latter are softer than those in the former. Spanish has a five vowel system [a e i o u]. As for diphthongs, they are expressed by combining a weak and a strong vowel and a Conde. The English system has double that figure. It is the tense and lax vowels in the English system that do not line up with the Spanish structure. These differences present challenges for Spanish orators as they are unable to make a distinction between the said vowels...
4 Pages (1000 words) Essay

Analysis of Morphology and Syntax, and Phonology Cases

...to characterize the nature of inter-language competence. This approach considers language learning as different from other kinds of learning. Learners come to know more than what they are exposed to in the input. Theoretically, the learning pattern is the same for different sounds in different languages. The general principle of phonology predicts that L2 speakers find it difficult to learn English sound contrasts. One of the most difficult sound contrast as pointed out by Weinreich ( cited in Yavas, 1994) is regarding allophones in the native language which are distinctive phonemes in English. Hammerly (cited in Eckman, et al., 2003 ) observed that sound of native language allophones in a new context are difficult to...
10 Pages (2500 words) Assignment
sponsored ads
Save Your Time for More Important Things
Let us write or edit the case study on your topic "Phonology" with a personal 20% discount.
GRAB THE BEST PAPER

Let us find you another Case Study on topic Phonology for FREE!