Comments (0)
Add to wishlist Delete from wishlist
Cite this document
Summary
How High School Teachers Felt about Teaching when they Started, How their Feelings have Changed, and what has Happened to Affect their Attitudes BY YOU YOUR SCHOOL INFO HERE DATE HERE High School Teacher Attitudes Introduction Most high school teachers enter the education industry in an effort to promote better learning and to gain an integral, self-actualized position in furthering education…
Download full paper File format: .doc, available for editing
HIDE THIS PAPERGRAB THE BEST PAPER91% of users find it useful 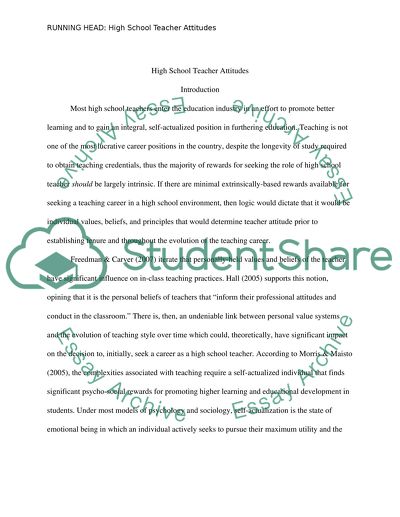 Extract of sample "Possible Change of Teachers Attitudes throughout their Career"

Download file to see previous pages Freedman & Carver (2007) iterate that personally-held values and beliefs of the teacher have significant influence on in-class teaching practices. Hall (2005) supports this notion, opining that it is the personal beliefs of teachers that “inform their professional attitudes and conduct in the classroom.” There is, then, an undeniable link between personal value systems and the evolution of teaching style over time which could, theoretically, have significant impact on the decision to, initially, seek a career as a high school teacher. According to Morris & Maisto (2005), the complexities associated with teaching require a self-actualized individual that finds significant psycho-social rewards for promoting higher learning and educational development in students. Under most models of psychology and sociology, self-actualization is the state of emotional being in which an individual actively seeks to pursue their maximum utility and the pinnacle of their abilities gained once self-confidence and self-esteem have been developed within the individual. When a high school teacher first lands their position, they often seek to break the proverbial mold of teaching by attempting to create unique and differentiated classroom content and teaching styles. Filled with fresh ideas, the teacher seeks to create a sense of personal belonging with teaching peers and with students which influences initial teaching styles. Teachers will often seek out alliances with other teaching facilitators and administrators in an educational scenario referred to as communities of practice, a collection of skilled individuals that collaborate to promote learning about a specific skill or practice (Wenger, 2005). However, it is not long into career where such activities will often meet with centralized hierarchies of control where bureaucracy and budget issues prevent effective facilitation of these communities of practice. Many teachers will attempt to create more contemporary and innovative curriculum content, using assistive technologies to facilitate modern learning concepts and principles (Bausch & Hasselbring, 2004). Other teachers in an effort to establish a positive name for themselves in the academic environment attempt experiential learning curriculum, a form of hands-on learning to facilitate a genuine and innovative learning experience (Merriam, Caffarella & Baumgartner, 2007). However, what is unclear is whether these preliminary and initial needs and values remain constant throughout the evolution of the teaching career. A Qualitative Study To determine what impacts attitudes of high school teachers early in career and throughout the evolution of practice, it was necessary to conduct a small-scale qualitative study utilizing a small sample of high school teachers as participants. Qualitative research was the most viable and reliable methodology for this study as measuring complex attitudes in a range of psycho-social principles cannot accurately be measured statistically. It was necessary to conduct semi-structured interviews with currently practicing high school ...Download file to see next pages Read More
Share:
Tags
Cite this document
(“Possible Change of Teachers Attitudes throughout their Career Research Paper”, n.d.)
Possible Change of Teachers Attitudes throughout their Career Research Paper. Retrieved from https://studentshare.org/education/1461007-possible-change-of-teachers-attitudes-throughout

“Possible Change of Teachers Attitudes Throughout Their Career Research Paper”, n.d. https://studentshare.org/education/1461007-possible-change-of-teachers-attitudes-throughout.
Comments (0)
Click to create a comment or rate a document

Responses to the global environmental challenges have become one of the heated debatable matters around the world, as a number of organizations, researchers, and nations are endeavoring to sustain the continuity of the global environment, where is harmed by different natural and manmade causes. In order to come up with an effective solution, it is very important to understand and go into the core of the global problem. In th...
7 Pages (1750 words) Coursework

It has a boundary separating it from its immediate environment. A number of different perspectives and metaphor...
14 Pages (3500 words) Report

Explicit learning is presented by teaching the specific concepts individually and mastery occurs then after. The main key in such a mode of teaching is being highly structured in every activity that is undertaken inside the classroom can be considered as part of the organization of the technique. One of the defining features of the technique is the fact that the teacher commonly points out the part of the lesson where they are in, thus, the term used is explicit teaching (Boyles, 2002).
The explicit form of teaching can be considered to fit lessons that are considered to introduce certain concepts, ideas or skills that are needed to be learned and that the students have low familiarity or experience with. For that matter, the...
10 Pages (2500 words) Report

In line with the proposition as to whether these operational managers discern ways of enacting responses from the relevant quarters when it comes to products, services, and their related operations, we see that their role is immense and they have to bring about activities right from scratch.
The change factor has to be studied in the light of a consistent basis since as the maxim goes change is the only constant, thus we have to understand the basis of change from that very point of view nonetheless. Managers have to see that the new products and/or services mark the very basis for an organization and it is because of these products/services that the company is moving in a swift manner in a forward direction. Thus all their e...
6 Pages (1500 words) Assignment

The resistance to changes in organizations is most prevalent at the lower ranks of the ladder due to employees distrusting the reasoning by management behind the decisions or the lack of respect of the acumen of their leaders. This attitude permeates in the workplace, staff ranks, sections, and even over the entire organization. However, there are those in the organization who always look forward to changes believing it will herald better opportunities for them and improve the working conditions for them. Former US president John F. Kennedy1 who wrote, “Change is the law of life and those who look only to the past or the present are certain to miss the future”, aptly elucidated this concept of change (Warren, Benne and...
12 Pages (3000 words) Case Study

As I was thinking about a project to do, I thought it would be interesting to get...
7 Pages (1750 words) Essay

In a similar fashion, the attitude of people towards the charitable services of Bell Shakespeare could also be found out. The hypotheses could be framed in a similar manner as above and the tests conducted to arrive at results are also the same as before. The only difference is between the dependent and the independent variables which are as follows –
In the first case, the appropriate test that needs to be carried out to check the hypotheses is the Student’s t-test (Kerr A. W., Hall H.K. & Kozub S., 2002, pp70; Schumacker, R.E., Akers, A., 2001, pp341; Edgington, E.S., 1995, pp111) and in the latter case, the suitable tests will be the F-test.
The attitude of the people towards Bell’s charitable se...
12 Pages (3000 words) Assignment

It was in the 1990s that the world began to hear serious warnings on global warming and climate change. The summary for policymakers prepared as part of the first assessment report by the Intergovernmental Panel on Climate Change was the first-ever in-depth study on this topic (Houghton, Jenkins and Ephirams, 1990). This report explored climate change and stumbled upon revolutionary revelations. This study announced in very clear terms that there is a natur...
6 Pages (1500 words) Literature review
sponsored ads
Save Your Time for More Important Things
Let us write or edit the research paper on your topic "Possible Change of Teachers Attitudes throughout their Career" with a personal 20% discount.
GRAB THE BEST PAPER

Let us find you another Research Paper on topic Possible Change of Teachers Attitudes throughout their Career for FREE!