Self Appraisal for Initial Personal and Professional Practice - Essay Example

Comments (1)
Add to wishlistDelete from wishlist
Cite this document
Summary
This essay is an analysis of self-appraisal of the writer's initial personal and professional practice based on SWOT analysis and two metric tests; the MBTI typological test and a career test. The self-assessment metric tests are first discussed informing the SWOT analysis…
Download full paperFile format: .doc, available for editing
HIDE THIS PAPERGRAB THE BEST PAPER91.6% of users find it useful 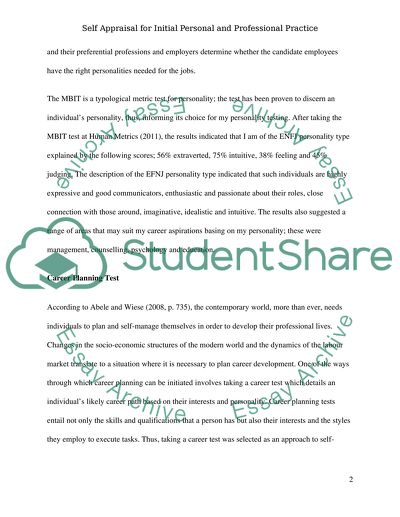 Extract of sample "Self Appraisal for Initial Personal and Professional Practice"

Download file to see previous pages According to Vos, Clipeleer and Dewilde (2009, p. 761), there is a strong relationship between personality and career progress as indicated by structural equation modeling testing of career plan theory. Personality heavily influences an individual’s professional practice and ultimate career success. This is because personality not only determines an individual’s career planning but also their behavior when in the professional field. As a result, a number of personality type tests and aptitude metrics have been generated to help individuals to determine their personality and their preferential professions and employers determine whether the candidate employees have the right personalities needed for the jobs. The MBIT is a typological metric test for personality; the test has been proven to discern an individual’s personality, thus, informing its choice for my personality testing. After taking the MBIT test at Human Metrics (2011), the results indicated that I am of the ENFJ personality type explained by the following scores; 56% extraverted, 75% intuitive, 38% feeling and 45% judging. The description of the EFNJ personality type indicated that such individuals are highly expressive and good communicators, enthusiastic and passionate about their roles, close connection with those around, imaginative, idealistic and intuitive. The results also suggested a range of areas that may suit my career aspirations basing on my personality; these were management, counseling, psychology, and education. Career Planning Test According to Abele and Wiese (2008, p. 735), the contemporary world, more than ever, needs individuals to plan and self-manage themselves in order to develop their professional lives. Changes in the socio-economic structures of the modern world and the dynamics of the labor market translate to a situation where it is necessary to plan career development. One of the ways through which career planning can be initiated involves taking a career test which details an individual’s likely career path based on their interests and personality. Career planning tests entail not only the skills and qualifications that a person has but also their interests and the styles they employ to execute tasks. Thus, taking a career test was selected as an approach to self-appraisal as it is effective in establishing the initial considerations for personal and professional practice. The test I selected, in this case, was the Career Planning Test by Career Path (2012), where 24 statement pairs are used to discern the individual’s career preferences, interests, and styles of performing tasks. The results cover the areas of interests and styles of executing tasks and are color-coded as red for expediting, blue for planning, green for communicating and yellow for administrative. My results indicated blue for interests and yellow for styles of executing tasks. This translates to interests in planning roles and administrative skills in job performance.
The two metric tests I took part in informing the next level of self-appraisal for my initial personal and professional planning; undertaking a SWOT analysis. ...Download file to see next pagesRead More
Share:
Tags
Cite this document
(Self Appraisal for Initial Personal and Professional Practice Essay, n.d.)
Self Appraisal for Initial Personal and Professional Practice Essay. Retrieved from https://studentshare.org/education/1443879-introduction-to-personal-and-professional-practice

al
alene72 added comment 1 year ago
Student rated this paper as
This essay was always my weak point. I could never complete it well. Still, after I found this particular paper, I understood how it should be completed. So, I performed my research afterward and completed the essay in several hours, instead of weeks as it was previously.

...Management Theory and Practice in the early childhood education industry This Report applies management theory into practice in the early childhood industry, especially in the context of women leaders. Management issues play a significant role in the academic sector, because early childhood professionals need higher levels of motivation in order to avoid burnout . As pointed out in a study by Osgood and Halsall (2007) where they carried out research to examine the position of women in leadership or management positions, a “glass ceiling” exists for women in the academic setting, which could significantly impair motivation. Since many of the individuals employed in the early education sector are women, addressing this issue is even more...
6 Pages(1500 words)Coursework
sponsored ads
Save Your Time for More Important Things
Let us write or edit the essay on your topic "Self Appraisal for Initial Personal and Professional Practice" with a personal 20% discount.
GRAB THE BEST PAPER

Let us find you another Essay on topic Self Appraisal for Initial Personal and Professional Practice for FREE!