Comments (0)
Add to wishlistDelete from wishlist
Cite this document
Summary
Name Institution Lecturer Date Reasons as to why immigrants fail to learn English while others learn and learn it rapidly Chapter 1 Teaching a group of immigrant students from different countries is always an active, vibrant and enjoyable experience. For the teacher, it is not just about imparting linguistic skills to the students, but also getting an insight in their mannerisms, mentalities, temperament, culture and their basic approach to life…
Download full paperFile format: .doc, available for editing
HIDE THIS PAPERGRAB THE BEST PAPER96.9% of users find it useful 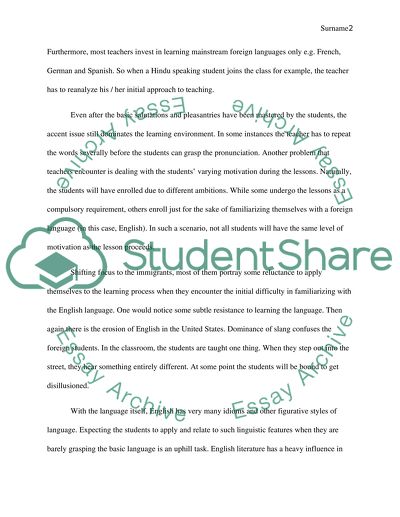 Extract of sample "Reasons why Immigrants Fail to Learn English"

Download file to see previous pages Some take shorter time to understand than others, while others really have a hard time even grasping basic terminologies. From the onset, it is the teacher who initiates all communication and this can be a very frustrating experience. Obviously, at the start not all the students have equal mastery over the English language. Some will take a bit longer to grasp the introductory advances. To this effect, new teachers are usually barely well – equipped to handle multi – cultural students at once. No matter how many languages the teachers know and speak, there is always the chance that some student will come in whose language the teacher has not grasped. Furthermore, most teachers invest in learning mainstream foreign languages only e.g. French, German and Spanish. So when a Hindu speaking student joins the class for example, the teacher has to reanalyze his / her initial approach to teaching. Even after the basic salutations and pleasantries have been mastered by the students, the accent issue still dominates the learning environment. In some instances the teacher has to repeat the words severally before the students can grasp the pronunciation. Another problem that teachers encounter is dealing with the students’ varying motivation during the lessons. Naturally, the students will have enrolled due to different ambitions. While some undergo the lessons as a compulsory requirement, others enroll just for the sake of familiarizing themselves with a foreign language (in this case, English). In such a scenario, not all students will have the same level of motivation as the lesson proceeds. Shifting focus to the immigrants, most of them portray some reluctance to apply themselves to the learning process when they encounter the initial difficulty in familiarizing with the English language. One would notice some subtle resistance to learning the language. Then again there is the erosion of English in the United States. Dominance of slang confuses the foreign students. In the classroom, the students are taught one thing. When they step out into the street, they hear something entirely different. At some point the students will be bound to get disillusioned. With the language itself, English has very many idioms and other figurative styles of language. Expecting the students to apply and relate to such linguistic features when they are barely grasping the basic language is an uphill task. English literature has a heavy influence in the curriculum and therefore students are expected to familiarize themselves with hundreds of classic literary pieces during learning. They end up complicating matters and students have a hard time registering what they are taught. A student would find it hard to grasp the aspect of symbolism when he / she can barely distinguish between tenses. Rules of exception also act as obstacles to the learning process too. Foreign students take time to establish syntax, sentence structure and word order. Regional dialects in the United States also heavily affect the student’s mastery of the language. For instance, a student living in a Latino neighborhood will be affected by the dialect spoken in that area. Some immigrant students have a phobia for resident students because they feel inferior when their English is not as polished as their hosts. Chapter 2 Immigrants ...Download file to see next pagesRead More
Share:
Tags
Cite this document
(“Reasons why Immigrants Fail to Learn English Essay”, n.d.)
Reasons why Immigrants Fail to Learn English Essay. Retrieved from https://studentshare.org/education/1434091-this-assignment-attempts-to-explore-the-reasons-as
(Reasons Why Immigrants Fail to Learn English Essay)
Reasons Why Immigrants Fail to Learn English Essay. https://studentshare.org/education/1434091-this-assignment-attempts-to-explore-the-reasons-as.
“Reasons Why Immigrants Fail to Learn English Essay”, n.d. https://studentshare.org/education/1434091-this-assignment-attempts-to-explore-the-reasons-as.
Comments (0)
Click to create a comment or rate a document

CHECK THESE SAMPLES OF Reasons why Immigrants Fail to Learn English

Do Immigrants Take Away Jobs and Reduce Wages of Native Workers

A considerable portion of the population of the UK is comprised of people who migrated to the country generations back and, fully integrated into the community; they enjoy equal status as their native counterparts. It is the fresh immigrants and their effect that is the subject of this essay.
The principles of Demand and Supply apply to the workforce market, as they do any other market. In a stable economic environment when supply exceeds demand, the prices fall and vice versa. The wage paid to the workforce is its price and includes benefits over and above the basic wage paid. With the influx of employable hands, in the form of immigrants, the supply increases over the demand pushing the prices down. This means that the nati...
6 Pages(1500 words)Essay

The Impact of Ethnicity and Racialisation on Immigrants to the UK

The rising public resentment and the resulting violent actions against those that seek asylum is an illustration of ‘racialization’ because these people are targeted simply by means of their migration status and not from their ethnic, cultural, or religious background. Inequality is the practically unavoidable by-product of two prevailing dynamics, prejudice on the individual level and a political disparity on a societal level. All British citizens enjoy lawfully guaranteed equality but the equalities regarding equal access and opportunities for immigrants are unquestionably lacking.
Racism as an ideology is illogical in principle and diverse in practice thus difficult to explain by a single definition. It permeat...
7 Pages(1750 words)Assignment

Reasons for Decline of Superannuation Fund

The growth in assets has been negative but the investments in other funds such as cash and fixed assets remain strong and gave benefits. However these benefits are outweighed by losses in other investments, such as shares, and the portfolio of investments registers negative growth. The investment market is volatile and subject to change, and when the markets go down, there is also a time for recovery. But can the superannuation pensioners afford to wait?

The Australian superannuation fund has been through significant developments in the past 10 years It was financially strong and well placed before the global crisis. However, the industry has been shaken, like others in the world, by the financial crisis. The industry e...
10 Pages(2500 words)Coursework

While I have been learning French for years, yet, only basic concepts like the meanings, pronunciations, and basic grammar rules are concerned, I want to understand more about the linguistic aspect, especially the morphological one, of the language. This includes the formation processes of French words and how the French internet languages are different from the traditional word-formation processes. I as well want to discover new information on the computer-mediated languages to improve my informal understanding of both English and French. I am also eager to learn more about the morphological word formation so that I can become a better language teacher.
Linguists categorize words as the small units of syntax within a given l...
12 Pages(3000 words)Assignment
sponsored ads
Save Your Time for More Important Things
Let us write or edit the essay on your topic "Reasons why Immigrants Fail to Learn English" with a personal 20% discount.
GRAB THE BEST PAPER

Let us find you another Essay on topic Reasons why Immigrants Fail to Learn English for FREE!