Comments (0)
Add to wishlistDelete from wishlist
Cite this document
Summary
An author of this essay will focus on the reasoning behind the high percentage of the dropouts in schools. Moreover, the writer gives some recommendations for the children. He suggests that the children should be made to realize the gravity of the situation…
Download full paperFile format: .doc, available for editing
HIDE THIS PAPERGRAB THE BEST PAPER93.7% of users find it useful 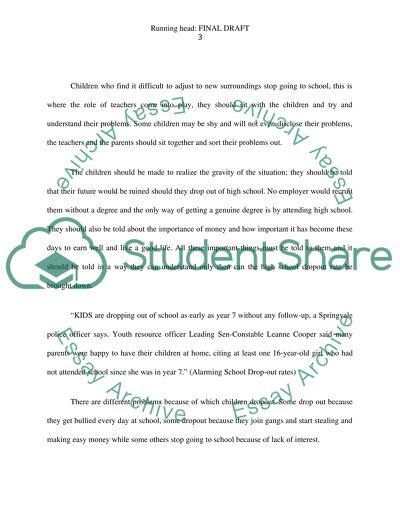 ﻿Abstract
High school dropouts face a complicated life; life is tough for all, but it becomes even more challenging for the students who decide not to go to school. The employment opportunities cut back greatly, earning money and living a good life becomes quite difficult. In addition to this starting, a family life also becomes very tough because of the financial troubles. It is very important to reduce the rate of high school dropouts; it has become an epidemic, which has been spreading at an alarming rate. However, it can be completely sorted out should the parents, teachers and the school management work in unison to solve this ever-growing problem. Every child is different, and it is essential to know the differences to be able to solve this problem.

Children, who find it difficult to adjust to new surroundings stop going to school, this is where the role of teachers come into play, they should sit with the children and try to understand their problems. Some children may be shy and will not even disclose their issues, the teachers and the parents should sit together and sort their problems out.
The children should be made to realize the gravity of the situation; they should be told that their future would be ruined should they drop out of high school. No employer would recruit them without a degree, and the only way of getting a genuine degree is by attending high school. They should also be told about the importance of money and how critical it has become these days to earn well and live a good life. All these essential things must be told to them, and it should be told in a way they can understand, only then can the high school dropout rate be brought down.
“KIDS are dropping out of school as early as year 7 without any follow-up", a Springvale police officer says. Youth resource officer Leading Sen-Constable Leanne Cooper said many parents were happy to have their children at home, citing at least one 16-year-old girl, who had not attended school since she was in year 7.” (Alarming School Drop-out rates)
There are different problems because of which children drop out. Some drop out because they get bullied every day at school, some because they join gangs and start stealing and making easy money while some others stop going to school because of lack of interest.
Almost all these problems can be solved and the rate of high school dropouts can be brought down significantly.
Children bully each other because the school authorities let them do so, they do not intentionally promote this practice, but they do not discourage it also which becomes a huge problem to deal with.
The school authorities should take necessary actions to prevent children from getting bullied day in day out. Punitive policies should be in place to ensure that no child gets bullied, even draconian laws can be introduced to stop this from happening. It has become a daily occurrence which has already affected several children.
The other problems can also be sorted out; lack of interest is another serious issue. The curriculum should be designed in such a way that it enthralls the students so that no one drops out. This is really a challenging task, but it is indeed plausible, the best brains should come together and design an attractive curriculum, this is sure to bring down the rate of high school dropouts.
To conclude it is very fair to say that this silent epidemic can only be dealt with should the parents, teachers and the school authorities work in unison. Issues like bullying can only be solved should strict policies be introduced by the management. It is high time to make significant changes, several children have already gone astray.
References
Alarming School Drop-out rates (2011). Rising Drop-out Rates. Retrieved from http://dandenong-leader.whereilive.com.au/news/story/alarming-school-drop-out-rates-in-dandenong/ Read More
Share:
Tags
Cite this document
(“High School Dropout Essay Example | Topics and Well Written Essays - 500 words”, n.d.)
Retrieved from https://studentshare.org/education/1431162-high-school-dropout

...Question Many business fail through poor cash flow, even whilst their published accounts show a profit on trading activities. Explain why this might be the case and explain what managers can do to avoid becoming insolvent through periods of high sales growth. Answer It is an established truth that many businesses fail through poor management of cash flow despite the fact that their published accounts show a profit on their trading activities. This is mainly due to the fact that they do not keep a close check on their cash flow and that the cash outflow from the business is more than the cash inflow into the business. Increased cash outflow over the cash inflow is mainly due to many reasons which require a close look into the affairs...
8 Pages(2000 words)Assignment

The Provision of High-Quality Education

... Impact of Social on College Success Success exists as an equal shot to all in a perfect world. This can be achieved through the provision of high quality education by excellent schools that employ highly qualified educators. Conversely, research has proven that a student’s social class can greatly influence success in the field he or she is studying. As a result, a clear correlation exists between a student with low socioeconomic background and academic progress. Low or no academic progress could result into problems in the student’s life, for instance, unemployment, accepting employment on a low wage job or dropping out of college (Eimers and Pike 84). This paper will examine the traditions in which students’ upper or lower social...
9 Pages(2250 words)Case Study

...in life is mostly connected to spiritual balance, happy family, and financial security. Taking into account the limit of opportunities provided to high school dropouts combined with inadequate social acceptance it is possible to make a conclusion that a high school diploma is crucially needed. Though, there is a number of articles on the Internet which describe how people become billionaires without this qualification. Giang picked up just ten successful people among which there are film directors, hair dressers, and business men who dropped school before graduation. Richard Branson, Quentin Tarantino, Vidal Sassoon, David Carp all were...
8 Pages(2000 words)Scholarship Essay

...People from high-context and low-context cultures may find it difficult to understand one another. Choose 2-3cultures as examples and explain why potential difficulties might arise. Name University Introduction The current world is considered as a global village. Technology has made it possible for people from different nationalities, race, and cultural background to come much closer to one another. Besides, it is possible for people from these diverse origins to work together and increase their levels of communication on a daily basis. These approaches are exciting because they help people interact and learn different cultures and social aspects from the diverse cultures and the people representing the diversity. However...
6 Pages(1500 words)Assignment
sponsored ads
Save Your Time for More Important Things
Let us write or edit the essay on your topic "High School Dropout" with a personal 20% discount.
GRAB THE BEST PAPER

Let us find you another Essay on topic High School Dropout for FREE!