Comments (1)
Add to wishlistDelete from wishlist
Cite this document
Summary
This paper presents a research design to study a number of factors that are associated with rates of bullying in order to suggest an experimental statistical research project that can be used to outline the problem and suggest possible solutions…
Download full paperFile format: .doc, available for editing
HIDE THIS PAPERGRAB THE BEST PAPER94% of users find it useful 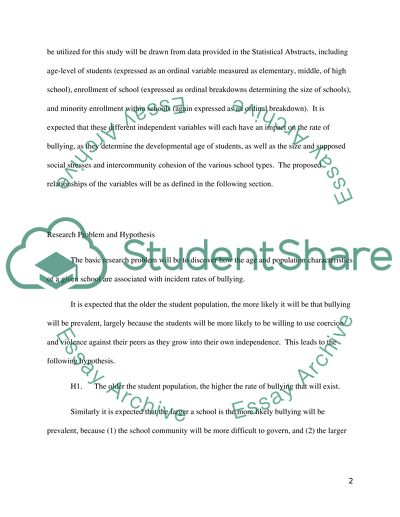 Extract of sample "The Social Problem of Bullying"

Download file to see previous pages The dependent variable in the proposed research will consist of the rate of bullying evident in a variety of schools having different characteristics, expressed as a percentage.  As such the dependent variable will be a ratio-type variable, having the ability to be expressed as a measurable number of fine distinctions possible as to quantity.  The independent variables to be utilized for this study will be drawn from data provided in the Statistical Abstracts, including age-level of students (expressed as an ordinal variable measured as elementary, middle, of high school), enrollment of school (expressed as ordinal breakdowns determining the size of schools), and minority enrollment within schools (again expressed as an ordinal breakdown).  It is expected that these different independent variables will each have an impact on the rate of bullying, as they determine the developmental age of students, as well as the size and supposed social stresses and inter-community cohesion of the various school types.  The proposed relationships of the variables will be as  The basic research problem will be to discover how the age and population characteristics of a given school are associated with incident rates of bullying.It is expected that the older the student population, the more likely it will be that bullying will be prevalent, largely because the students will be more likely to be willing to use coercion and violence against their peers as they grow into their own independence. This leads to the following hypothesis.
H1. The older the student population, the higher the rate of bullying that will exist.
Similarly it is expected that the larger a school is the more likely bullying will be prevalent, because (1) the school community will be more difficult to govern, and (2) the larger number of students will likely include more of the personality type that is prone to violence and bullying. This results in the second hypothesis.
H2. The larger the school, the higher the rate of bullying that will exist.
Finally, it is expected that the higher the rate of minority students within a given school, the more likely bullying will be prevalent. It is expected that two factors will work toward this end. First, the prevalence of more diverse communities will likely result in more social cohesion problems at this developmental age. Second, it is expected that minority students will be more likely to be involved in bullying, either as its victims, or as perpetrators, as they seek to express their own independence. This leads to the third hypothesis.
H3. The larger the minority enrollment, the higher the r ...Download file to see next pagesRead More
Share:
Tags
Cite this document
(“The Social Problem of Bullying Research Paper Example | Topics and Well Written Essays - 1000 words”, n.d.)
Retrieved from https://studentshare.org/education/1430244-the-social-problem-of-bullying

la
lavadakiehn added comment 2 years ago
Student rated this paper as
Wonderful work done on the "The Social Problem of Bullying". I think it is the best essay I have seen so far.

CHECK THESE SAMPLES OF The Social Problem of Bullying

... rights for human development and health (Thompson et al, 19). The same analogy should be extended for the often defenceless aquatic life that often times is beleaguered by the bad behaviour of humans on the surface in the selfless indulgence. The WHO (2003) Guidelines for Drinking-water Quality gives an outline of approaches to dealing with both microbial and chemical pollutants to be used for setting up minimum national standards for curbing pollution while incorporating individual countries’ cultural, social-economic conditions as well as the local environmental conditions prevailing. Whenever there is a credible verification of chemical contamination backed by factual occurrence of high toxic levels, if the contaminant chemical has been...
11 Pages(2750 words)Coursework

Erving Goffman was an astute observer of society, who immersed himself in the social environment which he was studying. He carefully observed and recorded the ways in which people’s behavior and interpersonal interactions are carried out in everyday life. He notes that “people perform their social roles and, as they do so, they produce social order through their actions and the regu...
6 Pages(1500 words)Article
sponsored ads
Save Your Time for More Important Things
Let us write or edit the research paper on your topic "The Social Problem of Bullying" with a personal 20% discount.
GRAB THE BEST PAPER

Let us find you another Research Paper on topic The Social Problem of Bullying for FREE!