Comments (0)
Add to wishlistDelete from wishlist
Cite this document
Summary
The present essay raises the question of an appropriate education for children of younger ages. It is mentioned that children of younger ages are in need of quality education and must be assisted so that they can cope with difficulties in their lives. …
Download full paperFile format: .doc, available for editing
HIDE THIS PAPERGRAB THE BEST PAPER94.9% of users find it useful 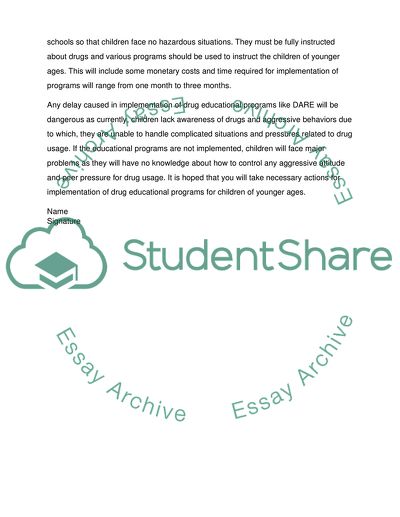 Letter to Superintendent Malcolm Thomas on trying to get more programs like DARE for children of younger ages in order to educate all children about drugs
Date:
Superintendent Malcolm Thomas
Organization Name
Address
Title: Getting more programs like DARE for children of younger ages
Sir,
Children of younger ages are in need of quality education and must be assisted so that they can cope with difficulties in their lives. Drug education is such type of education that should be provided to children of younger ages so that they gain awareness and stay away from the curse of drugs. They must be instructed about all kinds of drugs so that they can identify accordingly between different kinds of drugs along with their disadvantageousness. Drug related education is significant as lack of education brings consequences that are uncontrollable. Children share equal right to gain this education in terms of their health safety.
As you know, DARE (Drug Abuse Resistance Education) is such a type of education that is arranged for the education of people so that they can gain awareness about restrictive drugs and associated aggressive attitudes. For children, the education program is very advantageous as they are able to know about categorized drugs along with their affects on people. The program is an outcome of the issue of war on drugs. In the United States, DARE program is handled by police officers as they take the responsibility of handling all law related matters. Usage of drugs also comes under law due to which, police department is given the accountability to control drug related issues and to educate the masses about the abuse.
DARE program is an old program and is offered to different age groups. It is instructed that the education under this drug related program should be provided to students of grade 5 to higher levels. They gain assistance about risky situations and pressure from people around them related to drug usage. They are instructed to make their own personal selections for handling any kind of pressure. His program is very fruitful for children as they are able to handle different category of people’s pressure related to drug usage.
Like DARE, there are many other drug education programs that can be used for assistance of children of younger ages. Drug education must be made compulsory in schools so that children face no hazardous situations. They must be fully instructed about drugs and various programs should be used to instruct the children of younger ages. This will include some monetary costs and time required for implementation of programs will range from one month to three months.
Any delay caused in implementation of drug educational programs like DARE will be dangerous as currently, children lack awareness of drugs and aggressive behaviors due to which, they are unable to handle complicated situations and pressures related to drug usage. If the educational programs are not implemented, children will face major problems as they will have no knowledge about how to control any aggressive attitude and peer pressure for drug usage. It is hoped that you will take necessary actions for implementation of drug educational programs for children of younger ages.
Name
Signature Read More
Share:
Tags
Cite this document
(“Getting more programs like DARE for children of younger ages Essay”, n.d.)
Retrieved from https://studentshare.org/education/1411354-getting-more-programs-like-dare-for-children-of-younger-ages

(Getting More Programs Like DARE for Children of Younger Ages Essay)
https://studentshare.org/education/1411354-getting-more-programs-like-dare-for-children-of-younger-ages.

Children of the Enlightenment

Communism is an ideology that seeks to engender and maintain a classless, stateless social system based on common ownership of the means of production. And this ideology provided breeding grounds totalitarianism. Totalitarianism is the attempt to mobilize or coerce entire populations in support of an official state dogma, and the intolerance of activities which are not directed towards the goals of the state, entailing repression or state control of the business, labor unions, churches or political parties. (Drummond, pg. 235) Totalitarian movements maintain themselves in political power by means of the secret police, propaganda dispersed through the state-controlled mass media, extreme surveillance of free discussion and criticis...
9 Pages(2250 words)Assignment

It was the next generation that was changed most by technology. In the 1950s, television entered the home becoming part of almost every family. It was not simply a tool; it entertained, educated and babysat the generations to follow. Society took its biggest leap either forward or backward, depending on your viewpoint, after the public adopted what was to become the family friend. I’ve always been told that each generation is progressively more violent, less active (lazier) and suffers from an increasingly diminished attention span. I have determined that the advent of television is the cause or certainly exacerbates these personal and societal deficits and it all starts with the viewing habits of children.
Studies vary...
7 Pages(1750 words)Assignment

The decentralized form of the homeschooling populace limits the ability of researchers to outline conclusions on the precise effect of homeschooling on diverse outcome measures like an academic achievement (Ray). Nevertheless, assessments of homeschooled children have claimed that these students do well in that educational environment. In addition, a survey of homeschooled adults implies that homeschooling ushers in positive outcomes such as improved college enrollment and attendance.
Historically, homeschooling has been a key means for parents to offer education to their children. Most of the Founding Fathers of America went through this form of education, including Thomas Jefferson and George Washington (Coulson 120). With...
11 Pages(2750 words)Case Study
sponsored ads
Save Your Time for More Important Things
Let us write or edit the essay on your topic "Getting more programs like DARE for children of younger ages" with a personal 20% discount.
GRAB THE BEST PAPER

Let us find you another Essay on topic Getting more programs like DARE for children of younger ages for FREE!