Comments (0)
Add to wishlistDelete from wishlist
Cite this document
Summary
Behaviourism with emotional and behavioural difficulties Introduction This critical review is about ‘Behaviourism’ and its role in learning while helping students having behavioural and emotional complications. In the first section Behaviourism is defined and its background discussed in detail. …
Download full paperFile format: .doc, available for editing
HIDE THIS PAPERGRAB THE BEST PAPER93.4% of users find it useful 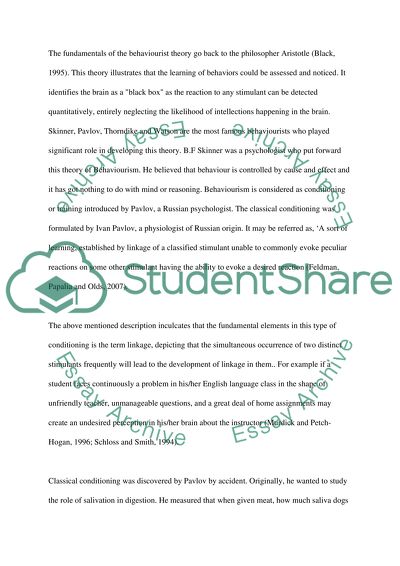 Download file to see previous pages Behaviourism with emotional and behavioural difficulties Introduction This critical review is about ‘Behaviourism’ and its role in learning while helping students having behavioural and emotional complications. In the first section Behaviourism is defined and its background discussed in detail. Then the role of Behaviourism in teaching and the point of view of different groups regarding its importance in applying for removing the SEBD issues in classrooms. At the very end in conclusion, a brief overview has been given for its improvisation in Saudi Arabian schools to improve the teaching methods and techniques and entails a new policy for SEBD students. More importantly the research question has been given at the end aroused from this review. Background John B. Watson, initially brought in ‘behaviourism’ into examination in the year 1912, which minted the word ‘behaviourism’. In 1938, this study was further preceded by B. F. Skinner who proposed that ‘learning’ can be determined as a discernible change. Afterwards, Ralph Tyler then made use viewpoints from behaviourism, in 1949, to direct lesson design. Behaviourism, merely deals with altering the behaviour by honouring demanded actions and penalizing or neglecting unwanted activities. Behaviour theorists determined ‘learning’ as nothing beyond the attainment of a novel behaviour. ‘Behaviour Modification’, a teaching framework was formulated through the previously identified research works and findings (Alberto and Troutman, 1995). The fundamentals of the behaviourist theory go back to the philosopher Aristotle (Black, 1995). This theory illustrates that the learning of behaviors could be assessed and noticed. It identifies the brain as a "black box" as the reaction to any stimulant can be detected quantitatively, entirely neglecting the likelihood of intellections happening in the brain. Skinner, Pavlov, Thorndike and Watson are the most famous behaviourists who played significant role in developing this theory. B.F Skinner was a psychologist who put forward this theory of Behaviourism. He believed that behaviour is controlled by cause and effect and it has got nothing to do with mind or reasoning. Behaviourism is considered as conditioning or training introduced by Pavlov, a Russian psychologist. The classical conditioning was formulated by Ivan Pavlov, a physiologist of Russian origin. It may be referred as, ‘A sort of learning, established by linkage of a classified stimulant unable to commonly evoke peculiar reactions on some other stimulant having the ability to evoke a desired reaction (Feldman, Papalia and Olds, 2007). The above mentioned description inculcates that the fundamental elements in this type of conditioning is the term linkage, depicting that the simultaneous occurrence of two distinct stimulants frequently will lead to the development of linkage in them.. For example if a student faces continuously a problem in his/her English language class in the shape of unfriendly teacher, unmanageable questions, and a great deal of home assignments may create an undesired perception in his/her brain about the instructor (Murdick and Petch-Hogan, 1996; Schloss and Smith, 1994). Classical conditioning was discovered by Pavlov by accident. Originally, he wanted to study the role of salivation in digestion. He measured that when given meat, how much saliva dogs produce. After a few days in the experiment, Pavlov noticed that the dogs in his laboratory started salivating when the lab attendant entered the room with the meat dish, before meat was placed in their mouth. This aroused Pavlov’s curiosity and he pursued the issue with more experiments. For example, he sounded a bell just before presenting his dogs with food. Before obtaining food, various times, following the sound of the ringing bell, the dogs were observed to start salivating as shortly as the bell started to ring. In other word, in reaction to a novel stimulant (the ...Download file to see next pagesRead More
Share:
Tags
Cite this document
(“Social, emotional and behavioural difficulties 2011-2012 Essay”, n.d.)
Social, emotional and behavioural difficulties 2011-2012 Essay. Retrieved from https://studentshare.org/education/1402126-social-emotional-and-behavioural-difficulties-2011-2012
(Social, Emotional and Behavioural Difficulties 2011-2012 Essay)
Social, Emotional and Behavioural Difficulties 2011-2012 Essay. https://studentshare.org/education/1402126-social-emotional-and-behavioural-difficulties-2011-2012.
“Social, Emotional and Behavioural Difficulties 2011-2012 Essay”, n.d. https://studentshare.org/education/1402126-social-emotional-and-behavioural-difficulties-2011-2012.
Comments (0)
Click to create a comment or rate a document

CHECK THESE SAMPLES OF Social, emotional and behavioural difficulties 2011-2012

In a situational interview, the questions revolve around a given situation or scenario where the interviewee is supposed to answer what she will likely do in order to address the situation (Huffcutt et al. 2001, 619-620). The question...
6 Pages(1500 words)Coursework
sponsored ads
Save Your Time for More Important Things
Let us write or edit the essay on your topic "Social, emotional and behavioural difficulties 2011-2012" with a personal 20% discount.
GRAB THE BEST PAPER

Let us find you another Essay on topic Social, emotional and behavioural difficulties 2011-2012 for FREE!