Comments (1)
Add to wishlistDelete from wishlist
Cite this document
Summary
There is an interview on the theme of social media. The interviewer says, "In our class we understand social media to refer to social interaction mediated through the Internet. These include social networking, status-update, and media-sharing sites"…
Download full paperFile format: .doc, available for editing
HIDE THIS PAPERGRAB THE BEST PAPER95.4% of users find it useful 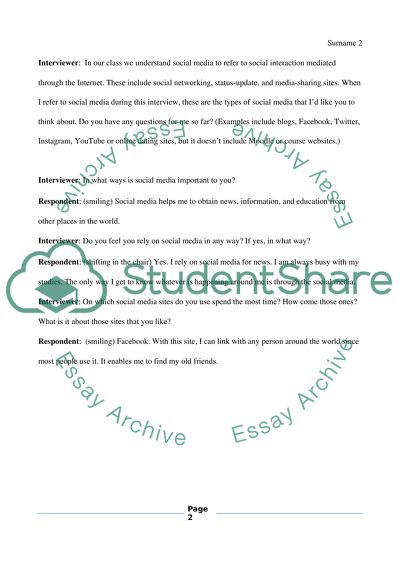 In-class usage
Interviewer: Do you take your laptop or any other handheld device to your classes? How come?
Respondent: (looking down) Yes. It enables me to work on my assignment easily.
Interviewer: For what do you use it?
Respondent: (long pause) I normally use it for my research activities.
Interviewer: Do you use your laptop/device for social media during class time?
Respondent: (smiling sheepishly) Yes. (Long pause) Especially when am bored with the class.
Interviewer: For what reasons?
Respondent: (shifting in her seat) Whenever am bored, visiting a social website makes me be cheerful.
Interviewer: In general, how often do you check social media sites while in lectures or tutorials? Tell me a bit, about what drives you to check those sites during class time.
Respondent: (Long pause) Once in a lecture. The key thing that drives me to check the site is whenever the lecture is boring. Once I check the site, I get the desire to continue using this site.
Interviewer: Do you find it to be a distraction to you in lectures or tutorials?
Respondent: Yes (long pause). Whenever I check the site, all my concentration is shifted towards the site rather than the lecture.
Interviewer: If yes, in what ways is it a distraction? Please describe how it affects your ability to focus on the material.
Respondent: It shifts my concentration from class work towards the social media thus making me miss out the important points of the lecture.
Interviewer: When you are in class, do you find yourself glancing at other students who are using social media sites around you? How come?
Respondent: Yes. (Long pause) They tend to distract my attention while in a lecture.
Interviewer: If so, how does the use of social media by other students in class affect your concentration?
Respondent: (Smiling) It reduces my concentration in a tutorial.
Interviewer: Some instructors ban the use of laptops and other electronic devices in lectures. How would you feel if a policy against the use of laptops/devices in class was introduced in a course you were taking? Please elaborate/explain.
Respondent: (shaking her head) So bad. (Long pause) It would make me be dosing in lectures whenever I feel bored. I would also miss out many things on the site.
Interviewer: What about if it were implemented university-wide?
Respondent: I would accept the change even though, it may make my life in school to be frustrating.
Interviewer: Can you think of a time when a course instructor used social media during lecture/tutorial? Please describe it.
Respondent: Yes. (long pause) The instructor referred to it as a co-teaching. (shifting in the seat)The lecture was divided into two sections. He taught us for thirty minutes then visited a social site. (smiling) Another teacher was waiting on the chat list. Our instructor connected his laptop on a projector and selected video chat. In the next thirty minutes, we were able to listen to the teacher on the social website. ...Download file to see next pagesRead More
Share:
Tags
Cite this document
(Social Media in Class Usage Assignment Example | Topics and Well Written Essays - 3316 words, n.d.)
Social Media in Class Usage Assignment Example | Topics and Well Written Essays - 3316 words. Retrieved from https://studentshare.org/education/1402060-collecting-and-analyzing-data
(Social Media in Class Usage Assignment Example | Topics and Well Written Essays - 3316 Words)
Social Media in Class Usage Assignment Example | Topics and Well Written Essays - 3316 Words. https://studentshare.org/education/1402060-collecting-and-analyzing-data.
“Social Media in Class Usage Assignment Example | Topics and Well Written Essays - 3316 Words”, n.d. https://studentshare.org/education/1402060-collecting-and-analyzing-data.
Comments (1)
Click to create a comment or rate a document

el
elisa94 added comment 1 year ago
Student rated this paper as
This research paper was always my weak point. I could never complete it on time. Still, after I found this precise document, I understood how it should be completed. So, I performed my research afterward and completed the research paper in several hours, instead of days as it was previously.

CHECK THESE SAMPLES OF Social Media in Class Usage

When we speak about business management, most people talk about the core business functions like strategies, products, training & development, management of various departments of the business like marketing, production, planning, etc. Social responsibilities and business ethics are the least communicated topics in the business community because of the least preference given to the non-productive sectors by organizations. Most of the greedy organizations spent millions on the research and development for improving their competitive power in the business world, but they often keep a blind eye towards their responsibility towards ensuring proper ethical standards in their business activities. Organizations that underestimate the...
6 Pages(1500 words)Coursework
sponsored ads
Save Your Time for More Important Things
Let us write or edit the assignment on your topic "Social Media in Class Usage" with a personal 20% discount.
GRAB THE BEST PAPER

Let us find you another Assignment on topic Social Media in Class Usage for FREE!