Comments (0)
Add to wishlistDelete from wishlist
Cite this document
Summary
Research Proposal Title: Children with Autism: A Home-based Interventional Program to Support Parents Dealing with Autistic Behavioral Issues in Children Purpose and Aims Parents of autistic children are always involved in some level of home-based intervention to manage their children under the guidance of trained therapists [Eldevik, 2009 #16]…
Download full paperFile format: .doc, available for editing
HIDE THIS PAPERGRAB THE BEST PAPER94.5% of users find it useful 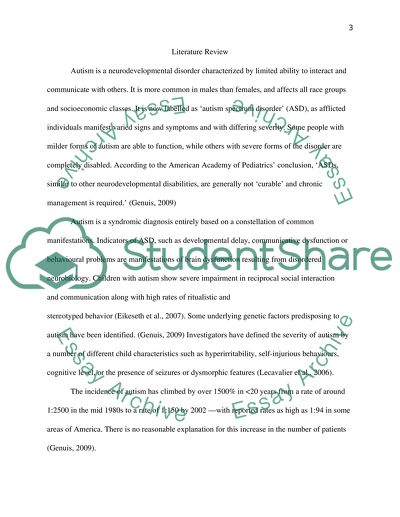 Extract of sample "Childrem with Autism: A home-based interventional program to support parents delialing with autisric behavioural issues in child"

Download file to see previous pages It is hypothesized that this support strategy will reduce the levels of parents’ stress, compared to parents who do not receive the support program. The results of this research would help in formulating a strategy to help parents cope with the stress of raising their children with autism, which in my opinion is a worthy goal of psychology, and forms my motivation for doing this interventional study. The specific research question is: Do parents experience reduced levels of stress if they participate in a support group with other parents of autistic children, with whom they can discuss the problems and apparent solutions? Literature Review Autism is a neurodevelopmental disorder characterized by limited ability to interact and communicate with others. It is more common in males than females, and affects all race groups and socioeconomic classes. It is now labelled as ‘autism spectrum disorder’ (ASD), as afflicted individuals manifest varied signs and symptoms and with differing severity. Some people with milder forms of autism are able to function, while others with severe forms of the disorder are completely disabled. According to the American Academy of Pediatrics’ conclusion, ‘ASDs, similar to other neurodevelopmental disabilities, are generally not ‘curable’ and chronic management is required.’ (Genuis, 2009) Autism is a syndromic diagnosis entirely based on a constellation of common manifestations. Indicators of ASD, such as developmental delay, communicative dysfunction or behavioural problems are manifestations of brain dysfunction resulting from disordered neurobiology. Children with autism show severe impairment in reciprocal social interaction and communication along with high rates of ritualistic and stereotyped behavior (Eikeseth et al., 2007). Some underlying genetic factors predisposing to autism have been identified. (Genuis, 2009) Investigators have defined the severity of autism by a number of different child characteristics such as hyperirritability, self-injurious behaviours, cognitive level, or the presence of seizures or dysmorphic features (Lecavalier et al., 2006). The incidence of autism has climbed by over 1500% in ...Download file to see next pagesRead More
Share:
Tags
Cite this document
(“Childrem with Autism: A home-based interventional program to support Essay”, n.d.)
Childrem with Autism: A home-based interventional program to support Essay. Retrieved from https://studentshare.org/education/1401874-hoe-educational-intervention-on-children-with
(Childrem With Autism: A Home-Based Interventional Program to Support Essay)
Childrem With Autism: A Home-Based Interventional Program to Support Essay. https://studentshare.org/education/1401874-hoe-educational-intervention-on-children-with.
“Childrem With Autism: A Home-Based Interventional Program to Support Essay”, n.d. https://studentshare.org/education/1401874-hoe-educational-intervention-on-children-with.
Comments (0)
Click to create a comment or rate a document

CHECK THESE SAMPLES OF Childrem with Autism: A home-based interventional program to support parents delialing with autisric behavioural issues in child

Emily's immediate supervisor deems her ‘over-enthusiasm’ as an impediment to her efficiency at work. Thus, she is recommended to lessen the time she spends for every patient.
Although she understands her supervisor’s recommendation from a business operation’s point-of-view, she is still adamant in her belief that gaining customer insights is crucial in aiding the pharmacy in better developing its line-up of medicinal offers. Carrying this burden, Emily consults her mentor in The Medical Nation, Dr Hussa Al Husine.
The mentoring session with Dr Husine happens twice a week for three weeks after Emily’s daily working period. Even without having a firm background in professional coaching, Emily thin...
10 Pages(2500 words)Coursework
sponsored ads
Save Your Time for More Important Things
Let us write or edit the essay on your topic "Childrem with Autism: A home-based interventional program to support parents delialing with autisric behavioural issues in child" with a personal 20% discount.
GRAB THE BEST PAPER

Let us find you another Essay on topic Childrem with Autism: A home-based interventional program to support parents delialing with autisric behavioural issues in child for FREE!